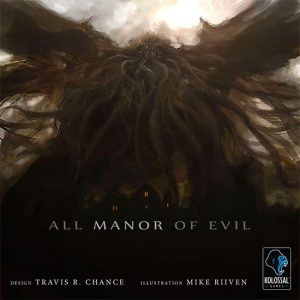 ATTENTION MORTALS! The fearsome presence of Cthulhu, Board Game Reviewer from beyond the stars, is here once more. The human Tony has again summoned my unearthly thoughts on yet another me-themed game. You should remember my other reviews of Necronomicards and Pocket Madness. Now, having been delivered another opus concerning my dark presence, Tony asks that I take a look and hopefully don’t sellout completely to Kolossal Games, the publisher of this trifle.

The game, All Manor of Evil, concerns my old friend Howard Phillips Lovecraft, the mortal to whom I first revealed my darkness. The human players are investigators invading his mansion to steal precious objects that have some significance to my followers. The human player who collects the most valuable objects without going insane wins. MWA HA HA HA! How innocent! This must be a game for human children. I like the theme already.

All Manor of Evil is for 1-6 players. Solo mode is for the truly insane already, but the game is best with a cabal of 4 or 5 humans. It takes 45-60 minutes to play depending on how many mortals you have.

For setup, each human receives a set of 4 action cards. A deck of Relic cards is placed next to a board representing the rooms of the mansion. Each of the four rooms receives a card from the Relic deck. These cards will have a value in money and a value in Madness. Above the board are cards representing Elder Gods in the game, ready to take over the world.

Every round, all humans will choose one action card from 1- Pilfer, 2- Deceive, 3 – Study, and 4 – Inspect. In the next step, players will resolve their chosen actions in order of the numbers on the card. If two players play the same number, players resolve the actions in galaxy-spin order from the first player and also receive a madness token (Tony tells me galaxy-spin direction is the same as how the pointy things move on human clocks).

When resolving actions, players will complete the action at the top of the card, then complete other parts of the directions going down the card. Each card has a different main effect. Then at the bottom of the card, two rooms are listed from which the human player may take a Relic. If no Relic is available because they have already been taken by the others, players can laugh mockingly at the foolish mortal (I am told this is inappropriate in human society).

The end of the game occurs when two special Clock cards are drawn from the Relic deck. Players then count up the money value and Madness values of all their Relic cards. If one or more players has the highest Madness total, they lose the game outright. The rest of the players compare money values. The highest total indicates the player has won and earns a brief moment of joy before the undeniable fate of the Elder Gods befalls them.

However, there is a possible and much more entertaining end for the game. Each time players take a card from a room, that card might have a symbol that indicates an Elder God who receives an “Awakening” token. If, at the end of any round, at least one Elder God card has more than 6 Awakening tokens, the game ends. If, at the end, more than one Elder God has 6 or more tokens, all players are consumed with madness. If only one Elder God meets this threshold, that card resolves its abilities and the game ends as normal.

Cthulhu is surprised. Rarely has he seen a seemingly innocent, simple game enjoyed by humans so quickly. The human players struggled with foreseeing the future and which Relic cards they must really pursue. Since each player’s stack of Relics is not visible and Relics with high Madness are also high in money value, humans must rely on their puny memories of how many and what value each player’s Relics are. In addition, they must also guess the overall Madness totals so that they even have a chance to win.

Even though each game round seemingly has the same basic rules, the rounds feel different due to many effects and game state changes. Keeping track of the Elder God awakening, even though it is entertaining, is something that human players must be mindful of. That constant pressure puts each round’s decisions in a microscope even when players have an overriding strategy.

Some players will let their human emotions of despair overtake them with the theme of this game. GAMES ABOUT ME ARE NOT FOR THE FAINT OF HEART! Humans must be prepared to suffer some hurt feelings from other humans for this playstyle of game. As a result, Cthulhu has observed that close friends enjoy this game more than humans who don’t know each other.

Also included in the review copy that Cthulhu received was an expansion with Monsters (which have room effects), additional Elder Gods, and “Arcane” Relics. These add much replay value to a game that Cthulhu feels will provide additional options to satisfy the humans’ love for new things.

Cthulhu is pleased with All Manor of Evil. Finally, humans are tapping into ancient ways such as theft for profit and insanity as a byproduct of loving Cthulhu too much. This is an easy game to recommend that will have friends discussing the events and card play while eyeing each other with distrust. The playtime for humans was on the shorter side and the instructions for play did not confuse their small minds either. If players normally shy away from Cthulhu themed games, tell the human Tony where they live (he’s making a list for me). If you cannot do that, introduce them to All Manor of Evil.

Final Score: 4 Stars – With interesting choices every round hiding a competition for sanity, this is an action-selection game worthy of the Cthulhu brand.

Hits:
• Round to round energy during play
• Good player interaction
• Hidden victory positions

Misses:
• Only slightly replayable without the expansion