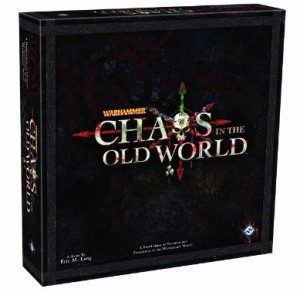 is set in the very popular Warhammer

universe and is all about who can be the most powerful bad guy. Do you like crushing your enemies in battle, corrupting the land and directing your loyal followers to do your evil bidding? Then this game is right for you!
Chaos in the Old World is an area control and action point game for 3-4 players (5 players with the expansion) that plays in about 90 minutes. Chaos in the Old World plays best with 4 players.

On a high level, Chaos in the Old World

is an area control and resource management game with lots of battles sprinkled in. Accommodating up to 4 players, Chaos in the Old World has each person assuming the role of one of 4, unique gods. Each god has their own particular dogma and special abilities. Each turn, you play cards, summon troops, battle your enemies and corrupt the land. Become the biggest of the bad guys or corrupt the most of the land, and you’ll be the victor.

Chaos in the Old World gets the standard Fantasy Flight Games treatment for game components…meaning it looks amazing. From the beautifully illustrated artwork to the uniquely sculpted minis, Chaos in the Old Wold is a great looking game. One of the neat things about the game board (besides looking like its stretched out on skin) is the tracking dials. These dials serve to help “level up” your god during the game.

The game also comes with a number of tokens, cards and counters to be used in the game. All-in-all I think players will be pretty happy with what comes in the box.

Each of these 4 gods has their own unique deck of spell cards, upgrades, followers and special abilities. You actually have to tailor your strategy based on which god you are playing. If you want to rule the world with combat, then Nurgle is probably a bad choice. But back to the game play.

Each turn starts out with the Chaos powers affecting the world. You draw from a deck that decides what events are happening this turn. Perhaps heroes are showing up to make your life harder, or you might have certain regions avoiding battle. You are drawing one card each round from a stack of about 20, so you never know what is going to happen each game.

After chaos has had it’s turn, it’s time for the players to go. Each player has an amount of power points that they can use each turn to summon troops to battle or cast spells. Once you are out of points for the turn, you are done for the round. The key here is deciding how best to use your points. Do you want to cast that spell in a specific region, or send another cultist in to spread your corruption? These decisions are the heart of the game.

After all players have spent their points it’s time to crush your enemies in battle. Battles are very Risk like. Roll dice (d6), certain numbers are hit the enemy. Most players should feel right at home with combat resolution. The board is separated into a number of regions that makes it easy to keep track of separate battles.

After the battles are completed its time to spread your corruption. This is based on how many cultists, and only cultists, you have in a region. The key is, a cultists adds nothing to a battle during a fight (they are weak). However, cultists are the only ones that can spread your influence. So you have to keep them alive, but you can’t leave them alone. Each region gets a corruption token for each cultist you have in there. Once a region has been corrupted enough, it’s ruined. A ruined region will score a lot of victory points for the ruiners but it becomes useless for the rest of the game.

Chaos in the Old World is a bit unique in that it can end in 1 of 4 different ways. Upgrade your god to his final power stage (represented by a dial), score at least 50 victory points, ruin 5 regions,  or draw the last chaos of the 7 chaos cards (in this case, the game wins and all players lose) are the ways this game can end.

The one thing I really love about Chaos in the Old World is how different each player approaches the game. Each god plays very differently and if you try to take that god outside of his dogma, well you are going to have a bad time. If you really want to kill things then you should be playing Khorne, trying to wage a war of conquest with Slaanesh is a recipe for disaster. Surprisingly the game felt really balanced even though the gods all play differently.  I do think some of the gods are easier to play then others, but an experienced group is going to have a really fun game.

One thing to keep aware of is there is a lot going on in Chaos in the Old World. It can sometimes be hard to teach new players the game, not because the rules are hard, but because the game plays so differently. What may look like a straight up game of conquest is actually a game of playing to your strengths and exploiting your opponents weaknesses. To further hammer home that point, the rulebook even has a tips section for playing each god. There is almost a rock, paper, scissors like meta game going on as each god has another that they should be picking on.

The best part of the game though is probably the multiple win conditions. I like that a player has a number of different options to try and win the game. I think each of the god has a win condition they are probably most suited to, but a flexible player can win in almost any of the ways. One of the interesting things about that is that a player can be very far behind on victory points but still storm ahead and win the game by fully advancing their dial. It’s fun moments like that that have me reaching for Chaos in the Old World again and again.

I think Chaos in the Old World will especially appeal to Warhammer fans because of its theme. To be honest, I’ve never ready anything in the Warhammer universe so I can’t comment on its authenticity. But one of our players was a big Warhammer fan and had a blast with this game. He knew all about the different gods and their particular dogma. I think that helped to add to the excitement with this game. But for those of us who don’t know anything about the Warhammer universe? I think you will be just fine. I love this game and I haven’t read a word of the books. Even as a newbie to the Warhammer universe, Chaos in the Old World will keep your attention and have you coming back for more.

Chaos in the Old World is a great blend of a fun theme and unique game mechanics. I love games where every player gets to play their own unique faction. It makes the replay value of a game so much higher as I’m always itching to try out one of the other gods. While I’m not sure the gods are perfectly balanced in Chaos in the Old World, I think the game does a great job of making each one fun toi play. I do think that you really want to have 4 players for this game (3 feels like it might unbalance it), although I’ve played with the expansions and it works really well with 5.

With a playing time of 1-2 hours, it’s just about the right length to fit into a game night. If anything, sometimes the game feels like it ends a little took quickly. Just as my corruption is spreading through the world someone will sneak up for a victory. But that’s ok, it just helps the game’s replay value to soar through the roof. I’ll play Chaos in the Old World any time someone asks. And that’s the hallmark of a great game.