Last week I had a chance to sit down (virtually of course) with T Caires from HABA Games. I’ve always been a big fan of these family games… both for something to play with my little ones and also their crossover titles like Rhino Hero and Karuba. With no conventions this year, it’s been hard to get information on upcoming and newly released games, so I’m always happy for a chance to chat with a publisher about their new offerings. And it turns out, HABA’s been really busy this past year. We’ve got quite a few new games to cover, so let’s get to it!

This is a game for HABA’s toddler line (ages 2+) that will have kids matching shapes, colors, and cutouts. There are actually a couple of games in the box, but the minimal components will have your kids taking food shapes (fish, bones, lettuce, carrots, and cheese) and matching them to the cutouts in the animal’s bowls. I’ve actually played this one with my toddlers and they really loved matching up the shapes.

The other game releasing this year to HABA’s toddle line, Building Site is a cooperative memory and matching game for 1-4 players. The big draw of this game will most likely be the actual dump truck that comes with the game that will have players find matching orange cone sites and using the truck to drive them to the construction site. Or if your kids are like mine, they will probably just spend time playing with the truck and messing around with the other components.

This fancy-looking game will have players trying to be the first to decorate their hedgehog with brightly colored leaves. To do this, players wil roll a die each turn, telling them if they need to draw a leaf out of the bag, or move a leave from hedgehog to hedgehog. This wlil require them to use their memory to make sure they pick the right colored one!

This is a cooperative game that T calls a “reverse tower defense game”. Those pesky animals are trying to leave the barn and it’s up to the players to keep them in there. Each round you’ll roll a die and move every animal on that color one space towards freedom. Players will then draw a card and use the results to try and lure escaping animals back, helping teach decision making on which animals to prioritize.

The first roll and write (I think) game from HABA. Color It has players rolling dice and coloring the matching squares. The base game is just that simple and perfect for kids who enjoy coloring (or adults really). The game also has advanced variants that will introduce new rules to help give the game more depth. There are a few different sheet designs in the box, with 20 copies of each included. There are also free sheet downloads on HABA’s website.

In a Flash Firefighter

This is a real-time, tile-laying game where players are trying to build paths from their firefighter to the fire. The game actually reminds me of a super light version of Galaxy Trucker as players are quickly grabbing tiles, hoping the connections are right. In a Flash Firefighters also has a built-in handicapping system to help younger players more easily compete with older ones.

Another roll and write game, with this one being a bit more advanced that Color It. 5er Finden is a real-time, pattern recognition game that will have players racing to find polynomial shapes that include all 5 symbols rolled on the dice. However, even if you are not a fan of real-time games, you can still play this one in puzzle mode instead of race mode.

If you are familiar with the stacking game Animal Upon Animal, then this one should be pretty easy to understand. It’s a special, limited edition, winter-themed version. Sleighs, stars, pine trees, reindeer, and other shapes replace the shapes from the classic version. It also comes in a fancy tin… for good or bad depending on how you feel about those. 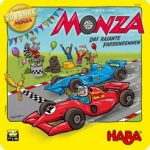 If you haven’t played Monza before, it’s a really good racing game to play with the family. It’s been out for a while now (20 years obviously), and HABA is releasing a limited edition, anniversary version. Like Animal Upon Animal above, this one comes in an embossed tin as well. Other changes are metallic painted dice which are also smaller size to help those little hands roll them, a new track, and rules for an advanced driver variant. This one doesn’t appear to be out yet, but should be hitting stores very soon.

T described this one as “guess who with cats” which for some of my friends, would be a selling point, others not so much—cats are pretty divisive here at BGQ. Regardless, it’s definitely a little deeper than that mass-market game as players have cards to play and will be trying to find out information without revealing too much of what they know. 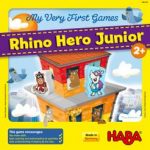 We’ve made no secret of our love for Rhino Hero (I may actually own 3 different versions of the game), and HABA is now adding it to their toddler line of games. Instead of cards, this one uses chunky tiles for stacking and will help reinforce counting (from 1-5). Rhino Hero JR. can be played either cooperatively or competitively, depending on what you are working on with your kids. This one is releasing in March of 2021.

Releasing in February next year, Critter Cruise is a cooperative memory game where players are trying to pair up animals with their suitcases before they can board the ark. Players will be flipping over suitcases, trying to find the animal ones, while avoiding the soggy suitcases.The game uses a pathing system to track time, and players must get all the animals aboard before the water fills up the path. 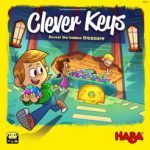 T showed this one off on our call and it was really neat looking. It’s a press your luck memory game where players are trying to unlock a gem cup in the center of the board. Each turn, you’ll insert a key into the board, if it fits, you get a gem from the cup. And you can keep going as long as you keep successfully placing keys. Fail and you lose your progress this round. In case you are worried about replay value, there is a special underboard that controls which keys fit, making it next to impossible to memorize what slots are open from game to game. Clever Keys is set to be released in February/March next year.

From designer Thomas Sing—best known for his game The Crew—comes a simultaneous deduction game. This one is a little hard to explain quickly, but players will be combing through a pile (a big pile) of evidence cards looking for clues on the crime. What’s interesting is that even though it’s a real-time game, it’s not really a race. The game ends after all players have built their case. It’s more about being efficient than being the fastest. The Key is actually one game in a trilogy of games that will use the same system, but with different themes and tweaks from game to game. The game is also fully replayable, so no worries about it being a one and done game.

This dexterity game will have players trying to mine gems from the top of the box. It reminds me a little of Click Clack Lumberjack in that players are hitting the box with a hammer, trying to get the right colors of gems to fall off. Knock too hard though and you might lose your progress. The first player to fill all four of their wagons wins the game. This will be a Summer release next yet. 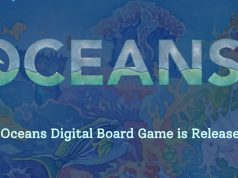 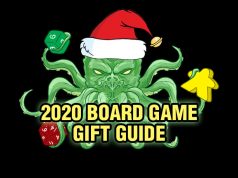 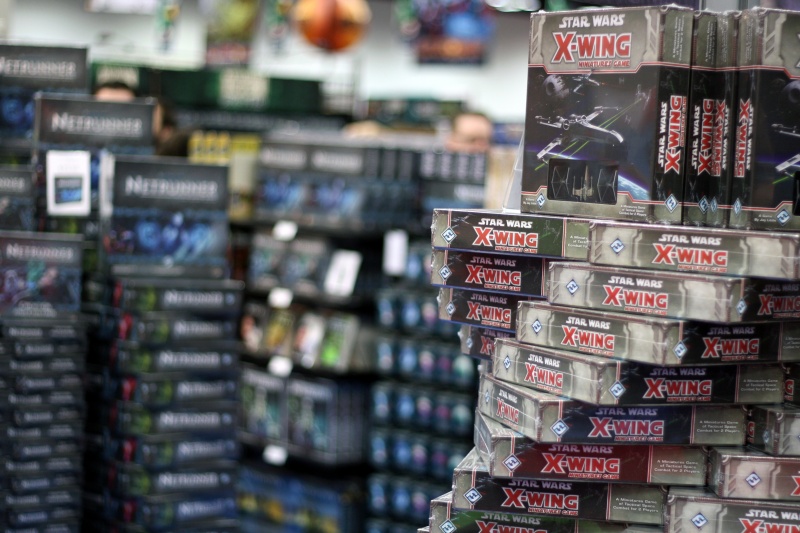