We review Break In Alcatraz, an escape room style game where players must break into the famous Alcatraz prison, and then break back out again. 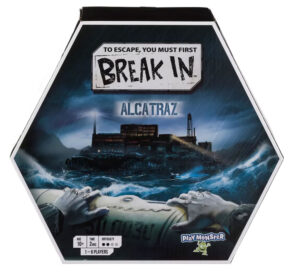 There is a vast array of different escape room in-a-box experiences you can choose from these days. And with people in the middle of a pandemic and all, it’s probably better than going to an actual escape room.

Today we are looking at Break In: Alcatraz. It’s 3D environment really tries to replicate something closer to the physical experience that is often lacking on the tabletop. So let’s see how it works (without any spoilers, of course).

As you might expect, Break In: Alcatraz centers around you trying to break into one of the world’s most secure prisons and subsequently break out with some of your friends in tow. At the beginning you’ll have a couple of cards and must inspect the outer box, eventually opening the sides and revealing more inside.

The solution mechanism revolves around what the game calls “solution sticks.” Each one has a symbol and various colored lines. Most puzzles will have you trying to figure out where to put the solution stick, a symbol to tell you which stick, and a color to determine which line to use. When correctly inserted, an icon will be viewable which matches another card in the deck.

Overall it’s a neat system, but it can be pretty difficult to get started sometimes. The game gives you essentially two different types of clues. Each section of the game has a numbered card that gives you a high-level idea of what to do. There are also puzzle-specific clue cards that will step you through the solution if needed.

Break-In: Alcatraz really does a great job of making a more immersive physical experience than things like the Unlock! series. The way the box unfolds and can be flipped around, opened, rotated, etc. feels more like a traditional escape room adventure.

That said, the puzzles here often come up short. As mentioned in the overview, occasionally it can be difficult to figure out where to get started. The majority of the puzzles really come down to logical reasoning. I would have loved to see more interesting puzzles where the solution takes full advantage of the environment.

My other gripe is that the story unfolds on a series of very text-heavy cards. Which is fine, there aren’t really many other options. But I personally found it to be poorly written. It’s pretty formulaic and often just not really believable. It loosely uses the story of an actual escape from Alcatraz at times but inserts you, the breaking in character, into the story. I don’t necessarily expect Pulitzer-winning stuff in a board game but the players shouldn’t be laughing out loud at the silliness either.

Also of note: the game can be reassembled and passed onto someone else to play. Although that does require you to be pretty careful about how things are opened and take care not to damage anything as you play.

Break-In: Alcatraz falls firmly in the middle of the road for me in this genre. The physical box and how it can be opened and manipulated is neat. I wish more puzzles took advantage of this, especially early on in the game. The solution system works but it sometimes means you’ll need a hint or two to understand what the game is asking you to do. And some better writing would go a long way here.

Final Score: 3 Stars – Great to see an escape room game that is more than a pile of cards. Just needs to kick up the puzzles and writing.

Hits:
• The box opening up really gives that physical escape room feeling of progressing from room to room.
• Can be completely reset and replayed by other groups.

Misses:
• The writing is pretty ridiculous.
• Solution stick system can be hard to grasp.