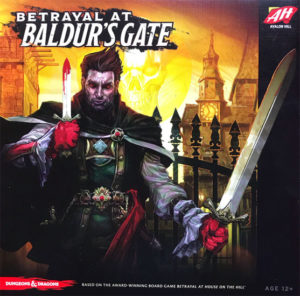 Betrayal at House on the Hill (BHH) has been a cult favorite board game of mine going back to the first edition in 2004. This was the first horror-themed board game I had ever played and the exploration and cooperative mechanic is what I gravitate to. In 2010 BHH Second Edition was released and it was essentially the original version but now with errata fixes incorporated. Last year, the BHH Widow’s Walk Expansion was released which added more tiles, haunts, and game content which this oldie but goodie needed to get back to my gaming table.

Betrayal at Baldur’s Gate is a cooperative, exploration game for 3-6 players which plays in about 60 minutes and is best with 4-6 players.

If you’re familiar with BHH and the Baldur’s Gate video game then the BBG theme will be nothing new. The shadow of Bhaal falls over Baldur’s gate and adventurers set-out to defeat the evil, but one may be a traitor.

I think most gamers have played BHH at least once and should be familiar with the rules so I’m going to do an overview and focus on the changes. Here’s the PDF of the rules if you want to see for yourself.

Players select from 12 pre-generated adventurers to play and all start on the Elfsong Tavern tile. Players then each take turns drawing tiles from the two City levels while exploring. If the tile has an Event, Item, or Omen symbol, they stop their movement and draw and resolve the matching card.

Now that’s out of the way, I want to highlight the big changes for this edition of the game.

I’m going to be honest, I was very excited to play this game because it touches many of my gaming interests over the years. As I mentioned in the beginning, BHH is a cult favorite of mine, I’ve played D&D since I was 10, and have played many Baldur’s Gate RPGs on computer and game consoles since high school.

I will admit that the horror theme I loved about BHH is gone, but it’s been replaced with the fantasy elements from D&D and Baldur’s Gate. Both fit well with Betrayal at Baldur’s Gate and it now feels more like a dungeon crawl, which is not a bad thing. Plus, if you’re familiar with the BHH rules, then it should be easy to get this to the table quickly.

The fantasy element also brings me to one of the big positives in BBG, the adventurer powers. These add variety and replay value to the game that BHH was missing. With the different adventurer powers, I really want to try out all 12 and see how they play, good or bad.

I would warn you that most adventurer powers only come into play during the Haunt because that’s when combat occurs, and a few of the adventurer powers seem lackluster. One, in particular, is Hunter’s Mark. This one can be a big disappointment because if you don’t find, trade, or steal a ranged item or omen weapon, it seems underpowered.

Another positive aspect is the strong Dungeons and Dragons ties to the game. Certain Powers, Items, Events, Omens, and even Haunts are oozing with classic D&D references like Ravenloft, Deck of Many Things, and the 10 Foot Pole. I’ve played BBG 7 times and the D&D nostalgia has yet to waiver for me.

Betrayal at Baldur’s Gate comes with a total of 50 Haunts of varying quality, with some being pretty disappointing. I’m not going to spoil too many for you, but in a few cases the Haunt begins and all adventurers fight a Troll or Umber Hulk and that’s it; no traitor, no traitor rules. Now, from a fantasy dungeon crawl perspective, that’s what you would expect. But from a Betrayal game, you want a little bit more.

I honestly don’t know if Betrayal at Baldur’s Gate will replace my copy of Betrayal at House on the Hill, but I have enjoyed my plays. I will most likely keep both in my collection. Like me, most of my gaming group loves the addition of the powers (even some of the boring ones) and the changes to Betrayal at Baldur’s Gate are light enough for most to master quickly, so teaching the game is minimal. Plus, as a massive D&D fan, the nostalgia factor alone is worth the shelf space.