We review Air Land & Sea a World War 2 themed board game published by Arcane Wonders. In this card game, two players are battling it out to be the first to reach twelve victory points. 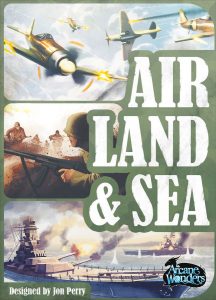 I have no particular connection to WWII—or any particular wars for that matter—which kept me away from Air, Land, & Sea for far too long. I think the theme is overused, and when distilled down so much for a small card game like this, it overlooks all the resources, lives, etc… that were lost. A game with this theme would need to stand strongly on mechanics alone to entice me. Since I do adore hand management and multi-use cards, I eventually got drawn in.

Air, Land, & Sea is a 2-player hand-management game that plays in about 30 minutes. It contains only 18 cards and some tokens. This one takes only a few minutes to learn, so does it have enough depth and strategy to stay relevant? Is it clever enough to deserve a spot next to Lost Cities or Hanamikoji?

In Air, Land, & Sea, two players fight over the three theaters of war in World War II throughout multiple battles (hence: Air, Land, & Sea). Each theater is represented by its own play area, and players take turns playing cards into each of those areas until a battle is over (i.e. all cards have been played) or one player withdraws from the battle. Points are then awarded to the winner of the battle based on how many cards are left in the losing player’s hand.

The goal is to reach 12 points. The sooner someone withdraws from a battle, the less points they give their opponent. A fully played battle will reward 6 points to the winner, but a player can give up as little as 2 points by withdrawing early. That means if you don’t like your odds to win a particular battle, you can surrender, then both players discard their hands, and the round ends. You’ll then have a fresh start with a new hand and a new battlefield layout.

Each card features a strength value, a designated theater (air, land, or sea), and a special power. Additionally, any card can be played face-down into any theater for a strength of 2 and no special ability. However, card abilities can later flip those cards, revealing their strength and activating their abilities.

Air, Land, & Sea is a “pick your battles” the card game. Sometimes you can look at your hand and see that your chances are pretty low based on the strengths and tactical abilities on the cards available to you. You need to be able to set aside your ego and withdraw to give up a minimal number of points. I don’t know any other game that provides that feeling.

There are really two factors at play throughout the game: how well you play the hand you’re dealt and how well you can determine the odds of your own victory.

This game has some of the cleanest, yet challenging hand management. You only start with six cards per round, so each one needs to be played with precision. You can play any card at least 4 different ways with those decisions branching out in a different direction based on your previous choice. Dealing with the hand you’re dealt is a different challenge. Maybe your opponent had a better starting hand. Maybe you made a tactical error, playing this card before another card. Maybe your opponent is playing into your strategy perfectly. All of those situations are bound to happen in a game of Air, Land, & Sea, and you have to be thinking about it every turn before you play your next card.

Those two factors combine for an experience that can stretch your brain in new ways every time you play. I love that feeling, especially for something that only lasts 30 minutes. I don’t feel burnt out or brain dead like a longer game, but I do feel like I got an adequate brain workout.

Furthermore, it’s super satisfying when you outplay your opponent OR get outplayed. You can’t blame the luck of the draw because you could have withdrawn and waited for a better opportunity to push forward. There’s often an exacerbated and vocal response when a battle does drag out to the last card because that means both players thought they had what it took to win the battle. I love that level of emotion and passion from a game.

I would suggest people look past the theme of Air, Land, & Sea and discover a super tense, and surprisingly deep hand-management game. The gameplay here is about as much as you can get out of 18 cards and some tokens. I’m still discovering new tricks every time I play. The more you internalize the cards, the more you have to think about it. This review only scratches the surface. I’d encourage anyone looking for their next 2-player game to dive in and see for yourself.

Final Score: 5 Stars –  A fresh and satisfying hand management game that reveals more and more with each play.

Misses:
• Experienced players will have a distinct advantage over new players
• Theme is not super strong

About the Author: Spencer is a lifelong gamer. Growing up, he went through a lot of phases in gaming. There were years of playing games like Sorry and Kerplunk with his mom and brother, followed by years of playing War and Gin Rummy with his best friend. Then there was an N64 phase, followed by a PS4 phase. In high school, it was pretty much all poker and Risk. Following that, there were a few years where the go-tos were Catan, King of Tokyo, and Coup. These days, there aren’t any more phases. Spencer bounces around from hobby board game to hobby board game with plenty of Nintendo Switch in the mix. His preference is for high interaction games such as dudes on a map, negotiation, social deduction, and party games. Clockwork Wars, Inis, Resistance: Avalon, and Lords of Vegas are a few of his current favorites.