We take a look at the iOS version of the popular board game Wits & Wagers. Does this great trivia game make a successful transaction to your iPhone and iPad? Read our review to find out.

While visiting a family friend years ago we were talking about some random topic, not sure what it was, but he was able to ramble off information about it rather easily. I told him that I was amazed that he knew that much about the topic. He then described himself being blessed as a person who is P.F.U.I., Packed Full of Useless Information. Being a person that is P.F.U.I. does have its advantages, especially in a trivia board game like Wits & Wagers. Wits & Wagers is a very popular party game where players are asked to write down a numerical answer to a random question and then everyone bets on the answer they think is the closest without going over. Today we will be looking at Wits & Wagers: Trivia Party, the iOS implementation of this fun party game, and seeing if it is worth your time.

Wits & Wagers: Trivia Party app is based on the Party version of the board game. Each player gets a small dry erase board and a marker. The game consists of seven rounds where a question will be asked. These questions tend to be outside the realm of common knowledge like average number of times a monarch butterfly flaps its wings per minute or actual number of lakes in Minnesota. (Answers at the end of the review) Players write down their guesses on their board and then they are placed face up in the middle of the table. Players take two betting chips, one big and one small, and place them on any answer they want. If they bet correctly and pick the closest answer that doesn’t go over, they will gain two points for the large chip and one for the small. The player who had the closest answer also gains a point. During the 7th round, players can bet any of the points they have earned during the game to earn more on the final question. The player with the most points at the end of seven rounds wins.

The game starts with an option to log on via Facebook, there is no Game Center integration. This will allows your friends who also play the game to show up as opponents in your games. The start screen has options to view the achievements you have gained as well as a stats page.The stats page is a nice feature that tells you how well you do in each category in your previous games. The game doesn’t have a tutorial to explain the game, but the first screen after you start the game explains this simple game very quickly and easily.

Each game will have three AI opponents that you need to match wits with. At the start of each round the question will pop up at the top of the screen with a number pad below it. You answer is then sorted with the AI’s answers in descending order on the screen. The two chips will be at the bottom right of the screen and you drag your two chips to the answer you think is closest without going over. There is also a boost button on the screen that allows you to use experience you have gained in previous games to get some help narrowing the answers down before you place your chips. The actual answer is displaced after the AI has placed their chips and the best answer is highlighted and points are awarded. During the seventh round, after you place your chips on the cards, a simple slide bar pops up to allow you to add extra chips up to the total points you have earned that game. The final scores are tallied and the player with the most points is the winner. Players will gain experience that will increase their rank in the game and currency to use the boost option.

At the base level, this app is a faithful implementation of the physical board game. The game provides a numerical trivia game that has the same mechanics as the board game. The interface is set up very nicely to allow for a novice to pick it up very quickly. I also like the user stats included in the game. Having a place that will keep track of how well you know certain categories of knowledge allows you to know your strengths and weaknesses. The game provides extra information on each question in the form of a fun fact that shows up after the answer is revealed. There were times that I wanted to know more about the subject and this gave me the opportunity. Unfortunately, that is the end of the positive things I have to say about this app.

First thing I have to mention is that there is no pass and play or local options with this game. The great thing about the board game is being able to use your knowledge about the people you are playing with to make better guesses on who you think would know this subject area better. There is no opportunity for that in this game. What I was hoping for from this app was a chance for me to not have to take the board game with me to play with friends. I was disappointed that this wasn’t even a possibility. The game claims to be a party game, but the lack of playing with other physical players makes that title misleading. The Facebook integration allows for friends that have downloaded the game to show up in the games that you play, but you’re not competing against them in real time. The app lacking this functionality turns a party game into a solo experience and it just isn’t as enjoyable.

I also find the questions rather easy. I’m not super intelligent by any means, some might argue not intelligent, but there are questions that I’m able to get exactly correct. When I play the board game, I never do this. I am also very rarely stumped on a question where my answer isn’t in the same stratosphere as the correct answer. The questions left me very underwhelmed and as those are the meat of this game, this causes problems. With the Facebook integration and looking at the developers previous game, this game is geared toward the casual player which will annoy fans of the board game. I have also had repeat questions asked in different games and in one game I had already seen 3 of the 7. I was shocked to see the same questions show up in the amount of time I played the app. Overall, I had a salty experience with the app. The game wasn’t what I wanted or expected and left me wanting a more robust experience. 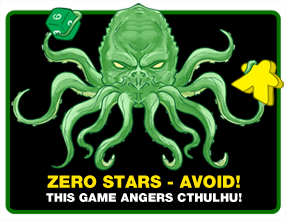 Answers:
• Monarch butterflies flap their wings an average of 510 times per minute, which is slow compared to many other butterflies.
• There are 11,842 lakes in Minnesota. (The state slogan is a lie)