We review Crypt Hunters, a fun 2 player game that pits the heroic Stormcast Eternals against and unending wave of undead Chainrasps set in the ever-changing Ten Thousand Tombs. 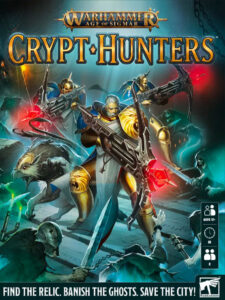 Glymmsforge is under siege both inside and out. Nagash, the God of Death, continues to send swarms of undead to attack the city and has also raised hordes of Chainrasps in the Ten Thousand Tombs below the city itself. In the tombs, there is only one hope, the Hyshian Illuminator, that can banish all the undead forces. The brave Stormcast Eternals must venture into the Ten Thousand Tombs to find this artifact and save Glymmsforge from the undead hordes.

This brings us today’s review of the Crypt Hunters from Games Workshop. This 2 player game pits the heroic Stormcast Eternals against an unending wave of undead Chainrasps set in the ever changing Ten Thousand Tombs. Does playing a fantasy dungeon crawler sound like fun? If so, then read on!

Crypt Hunters comes with miniatures and cards for the 4 Stormcast Eternals and 10 Chainrasps.

Once players choose their team they shuffle and draw their power decks and draw 3 cards to use in the game. The Stormcast player then places their 4 miniatures on the entrance tile and the Chainrasp shuffles the remaining tiles. It’s important to note that the Hyshian Illuminator tile is placed at the bottom of the tile deck after it’s shuffled.

Rounds are played in 5 phases:

Those familiar with Games Workshop games will not be surprised that Crypt Hunters production values and minis are top-notch. As with most Games Workshop games, you must build the unpainted minis included, but when finished, they look great. The rulebook includes assembly instructions as well as painted examples of final minis if you chose to replicate.

One of the coolest elements of Crypt Hunters is the ever-changing map tiles and rules around them. The map will never duplicate no matter how many times you play which is great for gameplay variety. Both players will control the map tiles as well which gives a nice sense of control to both players. The Chainrasp player will decide where to place drawn map tiles trying to foil the Stormcast Eternal player. And the Stormcast Eternal player can decide which direction the map will go and which tiles will be removed with their hero’s move and line of sight. Now, there’s no luck mitigation with drawing map tiles but it’s ok given what both players can do throughout the game.

After playing Crypt Hunters multiple times, I can say that it does favor the Chainrasp player but it’s fun, nonetheless. The Stormcast Eternal player has only 4 heroes and each with finite wounds. Now they are the fantasy version of Space Marines but this is a game of attrition and the heroes will fall but the Chainrasps will not stop. The Chainrasp player will continually place reinforcements unless all 10 minis are already on the map tiles. Plus, the Chainrasp winning conditions are simple – kill all the Stormcast Eternals and they don’t need to wait for a specific tile or token to win. So, surround, slow, or even stop the Stormcast Eternals, and this will eventually lead to your victory but if the Stormcast player does manage to win these are usually very close games that come down to dice roles or the last action(s).

Now, even though I did enjoy Crypt Hunters it does have a repetitive feel to it. The best game variety is the map tiles but the Stormcast Eternal and Chainrasp actions do have a rinse and repeat feel after you have several games under your belt. The power cards do offer some variety but these are one-time use and you only have 3 so, these are not going to change the feel of most rounds by much. This might not be a deal-breaker for some gamers but that’s how my group and I felt towards the end of our last few plays.

The other thing holding back Crypt Hunters from scoring higher was that this is not a deep strategy game. The gameplay actions for either side are simple and straight forward. The Chainrasp player is continually in “get ‘em” mode trying to constantly harass and slow their opponent. While the Stormcast Eternal player should be continually moving to reveal tiles while trying to pick-off as many opponents as possible. The only strategic element I can think of is map tile placement and removal but there’s not too much depth there either.

Crypt Hunters continue the Games Workshops tradition with excellent production values and highly detailed miniatures. It’s also refreshing to play a dungeon crawler with a unique and ever-changing map that will never be the same no matter how many times you play. Victory does tend to favor the Chainrasp player but it’s still fun and a close game even when the Stormcast Eternals eke out a win.

My biggest issue with Crypt Hunters was that after multiple plays the player action mechanic becomes somewhat repetitive. Also, the game is simple and straightforward which does not give if much strategic depth that you except to find in most 2-player games.

Misses:
• Actions can feel repetitive
• Not a deep strategy game