We review the Warhammer 40,000 Indomitus box from Games Workshop. This excellently produced 9th edition box set has tons of lore, streamlined rules, and huge replay value which new and existing fans should love. 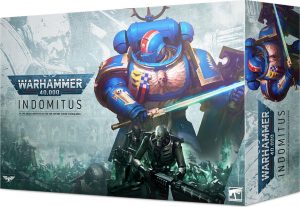 My eyes were opened to a new gaming universe in 1987 when I was gifted Warhammer 40,000 Rogue Trader rulebook. It was a dark, futuristic science fiction setting like no other I had seen before. It was not the Federation of the Star Trek universe of exploration and prime directives. Warhammer 40k was based on conflict within and subjugation for the betterment of the Imperium of mankind. I absolutely loved it. The rules were based on creating armies for tabletop battles. This was the first rules set for Warhammer 40k and over the years new editions changed the tabletop rules significantly, more armies & equipment added, and different battle/mission options provided. This brings us today’s review of the 9th Edition rules known as Warhammer 40,000 Indomitus from Games Workshop.

This will not be a normal tabletop review since Warhammer 40,000 Indomitus box set is a not just a rule book. It includes universe lore, tabletop rules, miniatures, and a stripped down codex for the armies included. I will instead highlight what’s included (trying not to give away too many spoilers), my impressions, and final thoughts on the overall Warhammer 40,000 Indomitus box set.

The production of this book will not disappoint current or new fans. The art and design are impressive from cover to cover and includes a ribbon bookmark built right into the spine making this core book feel a bit fancy. It’s just short of 400 pages but includes plenty of photos and color illustrations so there’s a lot to read, but it’s also rich with imagery as well. I must comment that the core book is filled with excerpts of 40k universe fiction and I cannot say if these pieces are all new, but,  being a fan of the fiction, I loved it. These excerpts really compliment the rules and gives readers a taste of what’s possible and happening in this universe. The core book is basically divided into lore, rules, and the types of tabletop play.

The core book starts with a short overview of the 40k hobby about collecting, painting, and gaming in this universe. Basically, it’s here for new players to know that there’s a ton of resources to support your armies. It’s a nice intro to assure new players that there’s information included within and on the web but all new players will need to supply the time to collect, build, and paint their armies because nothing comes assembled or painted.

The next two chapters focus on the Dark Imperium introduced with the 8th Edition rules and The Saga of Imperialis. The Dark Imperium was split by the Great Rift into two halves: Sanctus and Nihilus. Sanctus is the safer of the two human realms. Nihilus has been cut off from the rest of the Imperium. The rest of the Dark Imperium highlights the forces of the Imperium and enemies that are external, internal, and eternal. The Saga of Imperialis focuses on the past, enemies of old, and to the current time of the Dark Imperium and rise in Psykers due to the Great Rift. Overall, great lore of the Imperium of old and new. The former highlights current warzones that players can think about using in their tabletop campaigns and give the options that stretch to the past and to the present as well. The lore provided is an excellent framework for new players to absorb and a nice refresher for current fans.

The next three chapters outline the Warriors of the Emperor, The Lost and Damned, and Xenos Invaders which each feature in greater detail the possible armies for players to use. These chapters include the following options: Adeptus Astartes (Space Marines), Sisters of Battle, Imperial Guard, Adeptus Mechanicus, Black Legion, Death Guard (Plague Marines), Thousand Suns, Drukhari (Dark Eldar), Orks, Nercons, and Tau to name a few. The detail in these chapters are not codex army lists or datasheets but again still give excellent information of these armies for players to choose from. Each chapter also outlines hotspot war zones across the Imperium to again give players more tabletop ideas.

We hit the 7th chapter and we’ve made it to The Rules. Now, I must admit that I have not played Warhammer 40k tabletop since 4th Edition so I’m no expert nor will I do a blow by blow comparison to previous rules. I did download and review the current 40k battle primer from Games Workshop to get an idea though.

Before we hit the actual battle rules, I just want to note some things. Datasheets include the unit’s stats, weapons, and power levels (points you add up to create an army). Unit coherency is a key element of the rules and since units of multiple miniatures need to stay within 2” to maintain cohesion otherwise miniatures could be removed from the battle. All distances for troop movement and ranges of weapons are measured in inches and all dice used are D6 or D3.

The battle round is made up of 7 phases, as noted below, one player will take specific actions and then after the round switches to the next player and some phases have both players act.

Here’s my thoughts on the rules. I love the streamlined movement for units. Your units can move over obstacles that were their same height or climb over, using their movement in inches. I also thought the streamlined shooting rules were great. Cover is gone, and so if you can see and the unit is within range you shoot instead of debating cover. There does seem to be an emphasis on melee combat especially, with the units included in the Indomitus box. I’m not saying this is a bad thing but just be aware but with more army codex options to come these are not full or final armies in this set.

The final three chapters of the book focus on the three tabletop gaming types: open, matched, and narrative. Open play is flexible and has less restrictions making this as fun and lopsided as the players want it to be and includes a few set missions and over a dozen mission ideas. Matched play focuses on balanced armies, makes your armies Battle-forged allowing players to utilize stratagems, relies on victory points of primary and secondary objectives in missions to determine the winner. Finally, narrative play is really a campaign mode where players will catalog their Order of Battle listing all their units under the Crusade card to track as they gain experience and possibly earn Battle Honors ranks. All gaming options give players whatever tabletop experience they are looking for. Plus, collectively all three play options and missions included to give players a huge amount of replay value and variety with any size force.

The Edge of Silence

This book is basically a striped down army Codex for the Space Marines and Necrons units included with Warhammer 40,000 Indomitus. Its layout is similar to the Core Book in that it starts with lore in an overview of the Pariah Nexus a current warzone where the Necrons have risen and Imperium have started a campaign to retake this system moving to the Pariah Crusade, an offshoot of the larger Indomitus Crusade. The book then highlights the units included with both the Space Marines and Necrons. It provides nice images of what a fully painted and assembled units could look like. The Edge of Silence ends with the datasheets for these armies.

Now, my biggest issue with the information provided continually made references to the Codexes of the Space Marines and Necrons. I believe 8th Edition is compatible with Indomitus, but this will not be apparent to new players but searching online will allow you to find out most of the information you need as well as using the Warhammer 40K app. It’s just very disappointing that this information was not included in The Edge of Silence and that you need to look elsewhere.

If you’re new to Games Workshop gaming, then I’ll let you know that these minis have excellent detail and options to customize but you need to build them yourself. All come unpainted and still in the injection mold sprues. It’s a lot of work to carefully detach them and build them but it’s rewarding when you’re done. Warhammer 40,000 Indomitus comes with full instructions on how to build these minis and provides you great detailed examples for how to eventually paint them.

I will say that the space marines didn’t need as much care as the Necrons did. Most of the minis can be fashioned together without glue and push-fit but the Necrons were more fragile and needed much more TLC (especially the Necron Destroyer with the reap-blade— I still don’t think we’re talking). Just be aware there’s a considerable time commitment to assemble and paint but when completed you’ll have a great start for a future army.

I have to say that after doing this review for Warhammer 40,000 Indomitus, I do miss playing this tabletop game. The overall production values included in this latest set are top quality and impressive. The amount of lore provided of the past and present 40k universe was awesome in detail and the overview of army choices make me want to prematurely plan my victories. The combat rules are more streamlined and don’t have the same issues that I recall when I played (back-in-the-day). The open, matched, and narrative play options give this set a high amount of replay value and variety.

My two biggest issues with Warhammer 40,000 Indomitus are missing Codex information in The Edge of Silence book for both armies included. Yes, I was able to find the missing abilities using the WH40 app or web searches, but I would have preferred this information was included. The last thing is no dice. Yes, I’m a gamer and I own plenty, but I love getting dice in new games but alas none were included.