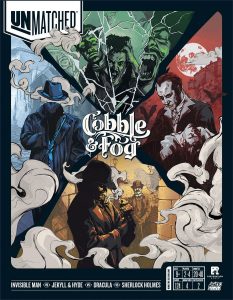 When it comes to skirmish games, players have no shortage of options to choose from. From large scale battles like Star Wars: Legion, to one vs. one affairs like Unmatched: Battle of Legends, there seems to be a game for everyone. And it’s this Unmatched system that has shown itself to be a fantastic entry into the skirmish genre. Its diceless system allows players to jump into the action with a unique deck of 30 action cards with minimal setup and rules overhead. We reviewed the core game here a while ago, so pop on over if you need a refresh on this fighting system before we dig into today’s entree.

All caught up? Good. Because now we get to check out Unmatched: Cobble & Fog, the newest entry into the Unmatched system that will give you four new fighters to control.

While Unmatched: Cobble and Fog is technically an expansion, it is also a stand-alone one, meaning you can play with just what comes in the box. No need to buy the original Unmatched: Battle of Legends if you don’t want to.

The core gameplay of Unmatched is unchanged with the expansion, so I’m not going to spend time rehashing the gameplay. You can head over to the original review if you are new to the Unmatched system.

One of my complaints with the original Unmatched game was that the characters all felt kind of uninspired. The mechanics were rock solid, but I just didn’t get excited about playing King Arthur or Sinbad. Enter Cobble and Fog. This expansion not only was a ton of fun to play but reignited my interest in the game at large. Each of the characters in Cobble and Fog not only felt unique, seemed to really embrace their source material.

The most interesting for me was The Invisible Man (which also boasts the coolest mini ever), who can quite literally disappear from the board. Not only that, but he has no sidekicks. Instead, he has 3 fog tokens that can be dropped around the board for a variety of effects.

Sherlock Holmes, as you might expect, comes with his trusty sidekick Dr. Watson. This duo keys off a lot of deduction elements—looking at your opponent’s hand, canceling their cards, etc… Watson is also the only character in this expansion who has a ranged attack, making him a really good ally to have.

Dr. Jekyll/Mr. Hyde is a bruiser. He has an almost Incredible Hulk-like feel to him, where he can dish out a punishing amount of damage. If you can get the right cards in your hand, Hyde can be a wrecking ball. The flip side of the coin is Hyde damages himself every time he maneuvers, so you must be strong on the offense with this one.

Finally, there is Dracula and his three nights sisters. Dracula is probably the most straight forward of the group, having mechanics that feel closest in line to the core game. He does have a thematic blood drain card that lets him bring one of the sisters back into play, which I thought was a nice thematic touch.

The components, in general, are of the excellent quality you’d expect from a Restoration Games product. The artwork from Andrew Thompson is fantastic, and the minis have a nice wash on them. My only gripe is that the board still has the pie chart circles, obscuring most of the art. I really wish they’d embrace the alternate circle art that Restoration Games teased on BGG.

Speaking of the game board there were some nice twists on this one. SOHO features a battle in the streets and rooftops of the city, which makes for some interesting pathing around the board. Baskerville Manor was somewhat more interesting in that it has a few secret doors around the map you can use to teleport to different spots.

Unmatched: Cobble and Fog is easily the best Unmatched product to date and it’s not even close. It has brought the system from almost heading to the trade pile to now having me crave more. I absolutely love the thematic elements in this set and found each of the characters to be really interesting. If this is the direction the Unmatched system is going, I’m all in.

For those who are already fans of the game, Cobble and Fog is an easy add. More fighters, more variety, more battles. For newcomers, I’d wholeheartedly recommend picking this one up first, and only getting the core set if you are looking for more character options.