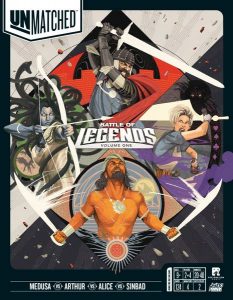 Back in the early 2000s, I stumbled across a sealed copy of Star Wars: Epic Duels at a second-hand store. While Star Wars was not shy to throw their license at pretty much any crappy game, I figured I’d give it a shot for $5. Little did I know that a great skirmish game was hidden inside this box that still resided on my shelf almost 2 decades later.

Restoration Games (Downforce, Fireball Island), the kings of “giving a game another turn”, have set their sights on this long out of print title with their newest release. Unmatched: Battle of Legends seeks to take Epic Duels and breath new life into it…yet without the Star Wars theme. Now, you’ll be using the Unmatched system to stage battles against classic figures from history. Who would win in a match between King Arthur and Medusa? Let’s find out!

The core set of Unmatched comes with four different heroes for the players to control. King Arthur (and Merlin), Medusa (and 3 harpies), Alice from the Wonderland (and the Jaberwok), and Sinbad (and the porter). Each character has a prebuilt deck to use for character attacks, defenses, and schemes.

The goal in the game is to reduce your opponent’s hero’s life to zero. On a players turn, they must take two actions (which are repeatable):
• Move up to your speed and draw a card.
• Play a scheme card from your hand: these affect the battle in ways other than attacking.
• Attack: Play an attack card face down. Your opponent can then play a defense card face down. The cards are revealed and any effects are applied. The defender then takes damage equal to the difference in the values on the card.

After two actions, your opponent takes their turn in the same manner. The decks also act as a defacto timer and are never reshuffled. If you have to draw and you don’t have any cards left, you take damage.

Overall I found Unmatched to be a very streamlined game. The unique decks offer enough variety that each of the characters not only felt different but created a desire to try them all. In addition to their deck of cards, each character also has a special ability. For example, Alice can shrink from large to small (giving her a boost to attack or defense, respectively), while Medusa fires a free shot for a point of damage from her bow each turn.

Speaking of ranged attacks, Unmatched borrows from the excellent line of sight mechanics found in Tannhäuser. No need to trace paths for ranged attacks. Every circle is color-coded and if your target is on the same colored circle, you can hit them with a ranged attack. The system works really well and it makes it very easy to determine line of sight. The downside is that I think Restoration Game went overboard with the circles.

The excellent artwork on the game board is horribly obscured by these large circles. I almost feel like I’m jumping between pie charts. While I applaud them for making the game more visually accessible by using color and patterns, I would have much preferred colored outlined circles so you could still see the art (much like the original Tannhäuser used.) They could have easily made the stroke thick enough to include the pattern or used different shapes. This was a large miss in my opinion as it makes the game feel a lot less thematic.

Moving on, I think the core lineup of characters offers a solid amount of diverse options. Each one definitely plays different and feels pretty unique. King Arthur is an in your face, melee fighter with heavy attacks, while Sinbad is more of a skirmish fighter who wants to move around. Personally, I much prefer the Star Wars theme from Epic Duels (I assume Restoration couldn’t or didn’t want to try to get the license), but the battles of great figures from history and literature definitely intrigue me. I did find the core lineup a tad underwhelming (Sinbad? Meh.), but some of the expansions look pretty exciting (Bruce Lee? Jurassic Park Dinosaurs? Heck yeah!). So it’s definitely nice that any of these expansions can be freely mixed and matched.

For the actual gameplay, it was really easy to learn and players were able to pick it up quickly. This one makes a great family level skirmish game on par with the Funkoverse Strategy Game I recently reviewed. While I’m usually more of a fane of dice based combat (as the luck of the draw can sometimes stagnate strategies), the card-driven combat does work well in the game. For the most part, decks seem to have the right mix of cards so turns are somewhat rare when you need to attack or defend and just don’t have the cards to do so.

Overall Restoration Games did a great job with Unmatched: Battle of Legends, and was able to breathe new life into a much loved and out of print game. While the hero choices in the core set didn’t exactly wow me, the gameplay was incredibly smooth and fun to play. After our first game, we immediately dove back in to try out the other characters. Taking a look at some of the upcoming expansions coming down the pipeline, there is a lot of reasons to be excited about what the future holds for this game system. Unmatched: Battle of Legends makes an excellent entry into the skirmish genre that anyone, gamers or non-gamers alike, can enjoy and jump into playing right away.

Final Score: 4 Stars – A great skirmish game that’s both streamlined and has some excellent production values.

Hits:
• Easy to learn, quick to play
• Each character feels unique and interesting
• Miniatures have a nice wash on them
• Able to easily mix and match characters and expansions

Misses:
• Board artwork horribly obscured
• Core lineup of characters is a bit unexciting