We review Train Heist, the cooperative looting board game published by Cryptozoic Games. In Train Heist, players must work together to loot a passing train and distribute it among the towns of the region. 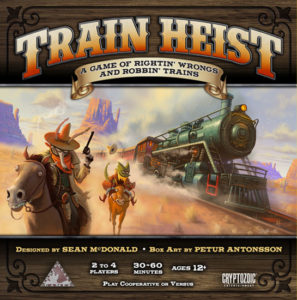 While I don’t always gravitate towards the old west theme, if there is one niche of that genre that’s sure to suck me in, it’s the train heist. Gearing up, forming a plan, and attacking a moving target. It has all the elements needed for an entertaining evening.

So with that in mind, today we are going to take look at the aptly named Train Heist. Now published by Crytozoic Games, Train Heist has players working together to loot a train in a weird Robin Hood style mashup. That’s right; you are going to be looting the train to give it back to the good folks of the region.

Train Heist is a cooperative hand management game for 1-4 players that plays in about 45-60 minutes. Train Heist plays best with 3-4 players.

The goal in Train Heist is to loot the train enough times to fill your heist meter. This is accomplished through a series of heist actions. On a players turn, may perform up to four actions.

The main options include moving around the game board (either on foot or quicker on a horse), changing the direction of a switch track, trading cards with other players, or taking a bullet token, which allows the player to save an action for a later turn. A player can also play cards (poker sets) from their hand for extra actions on their turn.

To actually loot the train, a player must play cards from their hand matching the symbols on one or both of the loot tiles in the train car they are in. Once a player has some loot, they can’t gain more until they’ve spent an action dropping off loot at a town. While on the train, the players will have to avoid the sheriff, who can send you to jail (wasting actions).

After a player finishes their turn, they move the train a number of spaces on the track equal to its current speed. If the train crosses over a new “star” icon, an event is resolved. When the train reaches a town, the loot tokens dropped off at that town are placed back on the train. If no loot tokens are present, then the hangman’s noose drops down a level.

The game ends when the players have looted the train enough times to fill the heist meter (set at the start of the game). They lose if the hangman’s noose reaches the bottom of the track or if the train leaves the board after the last event card is drawn.

Train Heist has one of the more interesting game boards I’ve seen in a while. While it’s hard to tell from the photos, the arrows on the two meters in the corner actually have magnets inside the game board. This allows for the arrows to stay in place as they are moved around their meter, which was a really clever production idea. Couple that with the good use of the dual board spaces (the inside of the train and the overland view), and I was a big fan to start with.

However, neat production ideas aside, one of the big problems I’ve run into with Train Heist is the large disconnect to theme. To start with, the cover of the box shows that the players are actually anthropomorphic animals, not humans. I thought this was going to be a really fun game idea that worked in some animals special abilities. Yet, outside the cover, the animal theme was mostly non-existent.

This disconnect is further widened by the looting system. Players have to play matching cards to loot an item from a train. It might be three lock symbols (sure, you could make a case for that one), or require an Ace, 4 and a 9 (can’t really make a case for that one). This feels more like the designer just needed a looting mechanic and went with it.

I could probably live with that if the looting system worked well. The problem is that you are completely dependent on what you draw in your hand. If you have no cards that can loot a tile, there isn’t really much for you to do on your turn. You can move a horse around or try and help your fellow teammates, but those turns are going to be fairly lack luster.

Despite these issues, not all is bad with Train Heist. I did enjoy how the train moves around the board, so players have to contend with the train’s movement as they take their turns (and yes, horses can get run over if you leave them on the tracks). Overall this can lead to some strategic decisions as player’s work the trains speed into their decisions.

Finally, I thought that the wanted cards were a nice touch as well. These work similarly to achievements/trophies in video games. These present a challenge and if you complete it, you get a special ability for the rest of the game. It gave me something else to work towards in addition to looting the train. While some seem almost ridiculously hard, many are definitely do able and provided a nice reward when achieved.

While I had some fun with Train Heist, unfortunately, there was too much of a disconnect from the theme for me. This, added to the fact that the game can tend to get a bit repetitive as it plays, makes me wish a little more development had gone into the game design.

While it’s not a bad game at any stretch, it did leave me just wanting more. There are definitely some good mechanics in Train Heist, such as the wanted cards or how the train works. While I’d be willing to give a new edition a second look, Train Heist just misses the mark for me right now.

Final Score: 2.5 Stars – A game that had potential, unfortunately it’s held back by the large disconnect from its theme.

Hits:
• Clever component ideas
• Enjoyed how the train speed was worked into the game
• Wanted cards were great for secondary goals

Misses:
• Large disconnect from the theme
• Game can get repetitive after a while