We review the Spiel des Jahres award winning game Colt Express, published by Asmodee Games. Is this action programming game worthy of this prestigious award? We find out in our full Colt Express review. 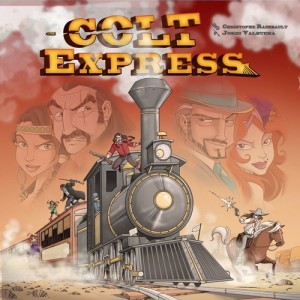 It’s hard to think about the Old West without conjuring up images of a gang of bandits robbing a train. Perhaps that’s what designer Christophe Raimbault had in mind when he brought us the game Colt Express.

Colt Express is an action programming game for 2-6 players that takes about 30 minutes to play. Colt Express plays best with 5-6 players.

Colt Express is played over five rounds, each of which will have players planning their actions ahead of time, and then watching as they are resolved one at a time. This is all done with the goal of the game to be the richest bandit in the Old West.

Each round, players will be moving, shooting, looting, and punching other players in the hopes of scoring the most loot. Players must carefully plan their actions if they hope to win, but sometimes information will be hidden from you, and you will just have to hope for the best. After 5 rounds of lootin’ and shootin’, the player with the most money is the winner.

The first thing you will notice about Colt Express is the great components that come with the game, specifically, the 3D train. The game comes with 1 locomotive and 6 train cars, all of which are assembled out of sturdy cardboard.

For the players to control, each player gets a unique bandit with their own special ability. Each bandit also gets deck of action cards, 6 bullet cards, and a wooden bandit token.

There is a deck of 17 round cards that will help decide how many cards are played each round, and in whether they are played faceup or facedown during the round. The artwork on the cards has a family friendly, cartoonish feel to it that I think works well with the game.

Finally, the game has a number of cardboard tokens to represent the various pieces of loot in the game. And for people to really get into the theme, Colt Express also comes with 10 different pieces of terrain (cacti, rocks, etc) that serve no other purpose then to look pretty on your tabletop.

As mentioned above, each player controls a unique bandit during the game. Players will start with an identical deck of actions cards and six bullets.

Colt Express is played over five rounds, each of which is divided into two phases.

At the start of the round, the first player draws and reveals a round card. This card will decide how many cards are played, whether each card is played face up or face down, and if there are any specific rules that happen at the end of the round.

Phase 1: Schemin’ – Players will take turn playing an action card into a common pile in the center of the table. Players may also draw cards in lieu of playing one.

Phase 2: Stealin’ – After all players have played the appropriate number of cards, the first player begins revealing played cards, starting with the first card played. That player than takes the action on the card they played, unless it is not possible to take (the loot is no longer there, there is no one to shoot, etc). If a player can do an action, they must.

If a player is shot (either by the marshall or another player) they gain a bullet card that will be shuffled into their deck. These only serve to clog up a players hand when drawn.

At the end of the round, players shuffles all 10 of their action cards, along with any bullet cards they received, and draw a new hand of 6 cards.

The game ends after the 5th round. Each player totals up the loot they collected. The player who shot the most bullets is also awarded a $1000 gunslinger bonus. The richest player wins the game!

I really like Colt Express. I feel like action programming is a really underused game mechanic. There is something entertaining about laying out the perfect plan, only to watch it become unraveled when your opponents do something unexpected.

And you can expect that to happen in Colt Express quite often. This is especially true because usually there will be at least one card played face down each round. So while you you may have an idea what people are looting or where they are moving to, chances are at some point in the round, you will be just playing a card and hoping for the best.

For some people, this might be a little too random for their taste. But in my experience, this chaos is where Colt Express really shines. It’s highly entertaining to watch your opponent attempt to shoot at empty air as you moved without them realizing it. In fact, many times I count on these hidden cards to carefully craft my plans.

That’s also why I think Colt Express plays better at the higher player counts. The added down time is quite minimal, and the increased player interaction is absolutely worth it. While the game does play just fine with 3-4 players, the interaction can take a bit of a hit. That’s why you need 5-6 players for this one to really shine.

And for fans of player interaction (and who isn’t), that’s something Colt Express really has in spades. From shooting your fellow players to fighting over the limited supply of loot, Colt Express will have you dealing with the other players constantly. In a world full of multiplayer solitaire eurogames, this can be a breath of fresh air.

In the components section I mentioned the 3D train car. While I love the look of the train and wouldn’t trade it for a 2d game board, I do need to mention that it can be a bit clunky to work with at times. This is especially true if you have big fingers or are sitting at an odd end of the table in relation to the train. More than a few times we’ve struggled to move our bandits around the inside of the train car.

Finally, I think that Colt Express makes an excellent family game or even a great gateway game. The pieces are incredibly attractive and fun to play with. The rules are really simple (only 2 pages), and the game plays quickly. It checks all the boxes I’m looking for when I’m trying to find a new game to play with my non-gamer family.

The Spiel des Jahres award usually goes to exceptional, highly accessible board games and I’d say that, without a doubt, Colt Express was deserving of this award. I’ve had a ton of fun robbing this 3D train, and we’ve already experienced a multitude of memorable moments.

If you are a fan of action programming games, or really just enjoy the chaos that can come from the unknown, Colt Express needs to be in your game library. The rules are simple, the game play highly entertaining, and the game scales great from 3-6.

Few games can accommodate 6 players without either increasing the downtime or sacrificing on depth, but Colt Express delivers on both counts. Colt Express is a game that I will always be willing to play when someone suggests it, and I can see it being a staple of my gaming library for years to come.

If you’d like to pick up a copy of Colt Express, you can get it for about $30.

Misses:
• Moving components in the train can be hard
• Doesn’t play as well at the lower player counts