We review Tiny Park, the new dice rolling and tile laying game published by HABA Games. In Tiny Park, players are trying to be the first to complete their amusement park by rolling dice and collecting tiles. 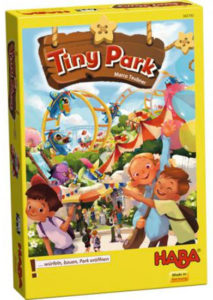 A few years ago, you probably didn’t pay attention to new releases from HABA unless you have children at home. While their kids games were known to be excellent, there wasn’t really much there for gamers. Thankfully, that’s not true anymore.

While they still make plenty of excellent children games, titles like Rhino Hero, Karuba, and Adventure Land have managed to straddle the line and appeal to gamers as much as young ones. So where does Tiny Park, HABA’s newest tile laying game, fall in that spectrum? Time to find out!

Tiny Park is press-your-luck tile laying game for 2-4 players that takes about 10 minutes to play. Tiny Park plays well at any player count.

The goal in Tiny Park is to be the first player to complete your amusement park. On their turn, a player rolls the game’s 5 dice, with up to two re-rolls allowed. Once they are finished rolling, they must match the symbols from the dice to available tiles in the market. The bigger the tile, the more symbols will be required to collect it.

Once chosen, the tile is added to that player’s board and the next player takes their turn. The tiles are a polyomino shape, so players must be aware of the space remaining on their board as they begin to run out of room. The game ends once a player has finished their park.

I’ve played Tiny Park with both a group of adults and with children and I think it’s safe to say, this isn’t going to be one of those crossover HABA titles. Unfortunately, Tiny Park is just way too light to appeal to most adults. There isn’t a ton of decision-making in the game, other than when to press your luck with the dice or where to place a tile (and even that is not hard). I think gamers looking for a light, polyomino tile laying game will be better served with something like BarenPark or Patchwork.

That being said, it does still work well as a family/kids game. The children we tested it with all enjoyed building their park and rolling the dice. However I think Tiny Park is going to fall into a small age range. The 6 year old we tried it with definitely needed help. The re-rolling concept wasn’t intuitive to him and he wasn’t really understanding the spatial placement aspect. While he did still have fun with the game, I think the 5 player age recommendation is a bit generous on HABA’s part. Although if your kids are more experienced, your mileage may vary with this one.

Now, the 8 year old we played with had no troubles picking this one up and had a great time. I think that puts this game solidly in the 7-9 age range. Older than that, and you are probably better off with one of the afore-mentioned games. Younger, and they will need help to play.

If you are ok helping younger kids play, then Tiny Park can make a great game to teach them about not only the press-your-luck mechanic, but also tile placement and spatial awareness. Those concepts are definitely used in many other games, so Tiny Park can be a great stepping stone for them.

Finally, for those that didn’t know, Tiny Park is actually a re-release of an older HABA game called Mummy’s Treasure. The gameplay is essentially the same except with a new theme and art. I think the re-theme was a great idea, as it’s pretty easy to get kids excited about building an amusement park. I do wish that the icons on the tiles were a littler clearer though. Sometimes it’s not 100% obvious that a tile requires more than one of a specific icon.

While Tiny Park isn’t going to be winning over too many gamers, it does work well as a light game to play with kids in a certain age range. The game is very easy to teach, it plays quickly, and the theme should be one that’s easy to get your kids to gravitate to. While I do wish there was a bit more decision making in Tiny Park, I can understand the need for a light dice rolling game that kids can easily pick up.

Final Score: 3 Stars – A very light tile laying game that can work well as a gateway game for younger kids.

Misses:
• Very light in the decision making
• Icons on the tiles could be clearer.