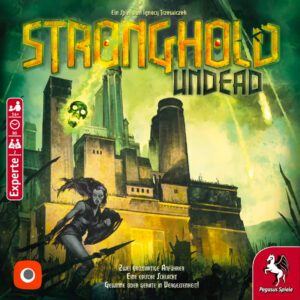 The concept of a siege is always intriguing to me. One side digging in their heels to create a defensive structure, while the other has a massive army with plenty of reinforcements. In tabletop gaming, it not only can challenge your strategy, but also your tactical reactions. I’ve seen a couple of siege-themed games come and go over the years, but the most notable of them has always been Stronghold. Today, we are going to look at an offshoot game called Stronghold: Undead (Second Edition). Does this edition clean up a good, yet marred game? Let’s find out.

Stronghold: Undead is a complex game that is definitely going to have a learning curve first timers will have to deal with. Thankfully the game comes with some pretty detailed player aids and its cards step you through the round structure during the game. But I’ll just give you a high level overview here, and you can download a PDF of the rules and if you want the full ins and outs.

One player will control the defense of the fort, while the other side will command an army of attacking undead. The game is played over 8 rounds, and if the attacker can breach any wall in the stronghold, they win. However, after 8 rounds, if the walls still stand, the defender wins.

The basic currency for the attacker is mana, which is provided from the round tracker, mana cards, the altar of bone, and some tiles they can build in lieu of siege engines. Meanwhile, the currency of the defender is time tokens. Every action the attacker takes provides time for the defender, which can be used to move troops around, recruit new ones, and build fortifications and weapons. However, people and building spots are limited so every decision must be carefully made. If you put a canon on one tower, the space can’t be used for a ballista or a holy cross.

The attacker will step through a series of cards, casting spells, moving troops around the board, and the defender will get a chance to react to all of them. Each round culminates with a battle phase. Ranged weapons and siege engines get a chance to attack, and then any troops on the walls will battle. There is almost no randomness in combat. Every unit has a strength, and the side with the higher strength gets to inflict the difference in casualties. That’s the only way an attacker can breach the walls—either whittle the defender down on a wall that they can finally breakthrough, or hit them with an overwhelming force they didn’t plan for.

While I liked the first edition of Stronghold, it had a few issues that eventually caused it to leave my collection. I was really hoping that this 2nd edition cleaned it up into a much better game. And overall it’s definitely a better game. I’d even call it a good game. It just didn’t quite get over the hurdle of being great. Let me explain.

Despite its complexity, the core loop of Stronghold: Undead is really interesting. I thoroughly enjoyed the back and forth nature of the gameplay where every decision the attacker made had a consequence. As an attacker, not only is your mana limited, but every spell you activate, or each time you consult your library, you are providing crucial time for the defender to react and foil your plans. The “this for that” gameplay mechanic makes every decision important as you have to decide if what you are doing is worth giving more time to the defender.

This also results in gameplay that’s really tight. In our games, it was rare for any side to pull ahead with a huge advantage. Most of our games went down to the wire, with a decision here or there affecting the game in a major way. That’s also why I think that the 90-minute playtime on the box is woefully optimistic. We never had a game be less than 2-3 hours.

Despite the improvements in this second edition, there are still some issues bringing down the game. The first is that the rulebook, while ok to learn the game, still leaves plenty of questions. More often than we’d like we had to head online to find the answer to a rules question that came up, or just make a judgment call on the spot. The other issue is with the board itself. The drab, green artwork, while thematic, really makes is hard to read at times. Once it gets littered with troops and tiles, finding connecting paths or unit stacking limits can be a pain.

But one of my biggest annoyances with Stronghold: Undead is the way the game was produced. It was originally crowdfunded on Kickstarter and several gameplay items are locked behind the dreaded “Kickstarter Exclusive” badge. My thoughts on Kickstarter Exclusives are well documented. Sure, I can live with component upgrades or expansions being blocked from retail buyers. But when items that affect the core game are locked behind a time wall, that’s frustrating. And the manual even points out different areas where you are missing out on gameplay mechanics because you didn’t back the KS version.

For those wondering just what kind of game this is, to me, it feels like a resource optimization euro game at its heart. While you have legions of units, there is no dice rolling here. When you send a troop to battle, you know how much damage it can do. The only real randomness in battle is from siege engines, which draw from a hit/miss deck. But their effects on the battle are somewhat secondary compared to the melee fighters. So, to win, it can come down to who utilizes thier time or mana the best. That, and be keenly aware of the board state, especially for the defender. If you miss a wall section the attacker has slipped troops to, it can be over quickly.

As I said earlier, Stronghold: Undead is a good game that’s just on the cusp of being great. While the core gameplay is intriguing and fun, it’s held back by the rules ambiguity, board issues, and annoying gameplay mechanics locked behind the wall of exclusivity. But if you can get past all of that, this is a really thinky game with a 100′ wall of meaningful decisions to make. It’s even boosted a bit in the replay value department because the attacker spells change a little each time you play. Stronghold: Undead might not be perfect, but it’s definitely near the top of the list on 2 player siege-style games.

Final Score: 3.5 Stars – A really thinky, asymmetrical two-player game that has a lot of meaningful decisions.

Hits:
• Lots of meaningful decisions
• Interesting core mechancis
• Asymmetrical gameplay
• Cards step you through the round

Misses:
• Mechanics locked behind Kickstarter exclusivity
• Rulebook needs to be better
• Board can be hard to read at times