We review Sorcerer, a new dueling game published by White Wizard Games. In Sorcerer, players are trying to be the first sorcerer to claim two of the three battlefields. 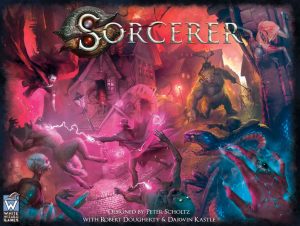 Publisher White Wizard Games is no stranger to dueling games. From their break out hit Star Realms to their successful followup that was Hero Realms, the company knows how to let you battle for supremacy. Heck, one of their founders is even a MTG (Magic: The Gathering) Pro Tour Champion and a hall of fame member.

Hot of the heals of its successful Kickstarter campaign, White Wizard Games has just released their newest dueling game, Sorcerer. Set in Victorian London, players will each control a unique sorcerer fighting for dominance of three locations in the city.

Each player begins the game by creating their sorcerer. This is done by combining three decks from the pool of Character, Lineage, and Domain decks. Experienced players can draft their decks, but the rulebook recommends new players just picking random ones.

Sorcerer is played over a series of rounds, with each round having 3 phases. Most of the focus will be on the action phase though (which is bookended by 2 “housekeeping” phases).

During the action phase, players alternate taking actions, one at a time, until everyone has taken 6 actions. Different actions include:

Almost all cards have an energy cost to be played. The three main types of cards are Sorceries, Minions, and Attachments. Sorceries are one time use spells, while minions get played to one of the three battlefields (max of 4 minions per battlefield). Every minion has an attack power and essence (life points), and sometimes a special ability. Minions can be augmented with Attachments.

After players have completed all their actions, a battle takes place at each battlefield. Combat is handled via dice. A player chooses a minion to attack with and rolls dice equal to its power (max of 7). Dice will have either a blank, hit, double hit, or a critical hit. After dice are roll, players can spend Omens to force the reroll of a die (from either side). Damage is assigned by the defender (expect for critical hits, which the attacker chooses) to either a minion or the battlefield. As soon as a player can do 12 damage to a battlefield, they control it. Control 2 out of 3 battlefields and you win.

The first thing you will notice about Sorcerer is the excellent production values. White Wizard Games has come a long way from the single deck tuck box that was Star Realms. The boards are made of thick stock and have a glossy sheen. The insert easily holds all the components with plenty of room for expansions. Even the artwork is well done and highly thematic.

One of the main draws of Sorcerer is that you get variety in your gaming experience without having to buy tons of booster packs, or even do any deck construction. Whether that is a plus or not for you really depends on what you want out of a dueling game. Personally, I love tinkering with decks, pulling cards in and out until I have something I really like. But for a lot of people I know that’s a turn off. When I played Netrunner with my wife, she hated having to build a deck. If you fall into that group, that Sorcerer is the game for you. Choose a Character, Lineage, and Domain and you are ready to roll.

However I will say that I think experienced players will have a leg up knowing what’s in each deck. It will be easier to mesh up some synergy between the decks if you know what is in one each. To be honest, I wish the designer had included some suggested starter decks in the rulebook. In one of our first games, I had a grouping that was really high on minions, which meant that I didn’t have much to do when we were down to the last battlefield. I had a massive hand of minions, but couldn’t play any of them because I already had 4 out.

Which brings me to one of my other points. I really wish there were more sorceries in the game. Every deck seems to be chock full of minions, with only about 2-4 spells per deck. It would have added some nice variety to have a bit beefier spells selection, and would have helped with the aforementioned minion backlog.

I will say though that I did like how each deck comes with its one unique power card. These cards can be used once per round, and really synergizes with the decks they came from. They can really help shape your strategy and I found myself relying on them quite often.

Finally, let’s talk about the dice based combat. For the most part, I enjoyed it. The omens give you some nice luck mitigation, and also add a bit of risk reward. Do you spend most of them on the first battle, leaving you nothing for a later battleground? It adds a little bit of strategic decision making. The only issues we ran into was in the end game, when things turned into a bit of slog as players were forcing re-roll of any crits to save the battlefield. But overall it was a nice change from the straight numbers damage.

Sorcerer is another solid offering from dueling game master White Wizard Games. I think this one has the potential to appeal to the same crowd that are loving games like Keyforge. Players that want a dueling experience, without the grind of building and tinkering with their own deck. The theme is dark, horror filled, and well supported by the artwork. Whether the theme is a plus or not for you really comes down to personal preference. But there is some nice variety in Sorcerer with the mashed up decks even in just the core box to keep gamers dueling for quite a while. And the already available expansion add in even more options.

Final Score: 3.5 Stars – A solid dueling game that lets players jump in with some nice variety without the overhead of deck construction.