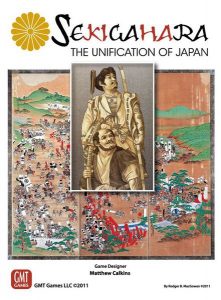 Shortly after becoming a “board gamer” I started hearing rumblings of wargames. These, I was told, were unlike what I was exposed to in the normal course of just being a board gamer. They belonged to a special subset of folks who could parse rulebooks more complicated than the tax code, spend three-to-twelve hours on a single game, and revel in terrible production quality.

Let me let you in on a secret—there is no secret to being a wargamer. Just like euro games, party games, or thematic games, there are thousands of wargames that run the gamut of accessibility, theme, and length. There is, undoubtedly, one out there for you, even if you aren’t a West Point graduate.

And that one might be Sekigahara: The Unification of Japan. It has stood the rest of time as one of the best entry points into wargames. So, let’s see what makes it stand out.

Sekigahara is set in 1600 Japan where the death of Toyotomi Hideyoshi had left the rule of the country in flux. His chosen heir was only 5 years-old and as such, other clans sought to take power. These disparate clans from across Japan largely grouped into two main factions behind Tokygawa Ieyasu and Ishida Mitsunari. These are the roles players will take as they attempt to reunify Japan and claim control for themselves.

The game itself is played over 7 rounds but can end early if your leader is defeated in battle. After the seventh round, points are scored for controlling castles and resource locations on the board and the player with the most points wins.

Everything in Sekigahara is based on your deck of cards. They represent your influence over the clans that have taken your side and you’ll expend those cards to move your armies around the map and deploy troops into battles. In general, every block in your army belongs to a particular clan and may also have a cavalry or gun symbol as well. You start your turn being able to move your units. When you move into a location with opposing blocks, you’ll start a battle after the movement phase.

During combat, you play a card and deploy a block from that clan, adding their strength to the impact track. If other units from the same clan have already been deployed into the battle, it will give them additional impact as well. For every 7 impact you have in a battle you’ll inflict a casualty on your opponent, making them lose a block after the fight is finished. The loser must take an additional casualty as well.

But the battle of Sekigahara historically swung on these loose alliances. When a player deploys a block, their opponent can play a loyalty challenge card. When a unit’s loyalty is challenged, you must show another card representing that clan is still in your hand. If you can’t, the block changes sides, and its impact is added to your opponent’s side.

The gameplay of Sekigahara is perfect. Each turn you’ll stare at a map and try to figure out how to best position your armies. You can spend additional cards to move them farther, but that will leave you less cards to play into combat.

Should you spread out and try to claim resource locations and castles? They will give you additional bonuses like more blocks to be able to recruit and one additional card each round. And if the game is fought to a conclusion, they represent the points you score. But spread too thin and you can leave your leader susceptible to being killed.

Even the makeup of the blocks on the board is, in itself, a decision to be weighed. Making a large army of the same clan can be extremely powerful, as units get extra impact in battle for each unit from the same clan already played. But it is much less flexible, if you have no cards of that clan in your hand you won’t be able to really take advantage of their power. A more varied group of fighters may have less impact, but increased flexibility.

Sekigahara feels highly tactical, despite the inherent amount of luck you may have to deal with when it comes to drawing from a deck of cards. A large standing army can be an intimidating presence, but you must have the right cards to activate those units. If you spend too many cards for additional movement, you may find yourself with an army that you can’t particularly use.

But it’s all a balance. These head games are part of the beauty of the design. Maybe you reinforce an area, trying to scare your opponent off from attacking there—knowing full well you have no cards to deploy the blocks at that location. Rarely will anyone charge headlong into a force double their size, but even so the size of the army is only half the story in a battle. You can’t be too cute though, if you enter a location with a force 4 times the size of your opponent you overrun them without having to play any cards or deploy any blocks.

Once the battle starts, it all comes down to the timing of which block to deploy. Do you start with your strongest block, hoping to bait a loyalty challenge early? Do you keep some units back to protect them from your opponents challenging them? If you only deploy units when you still have a backup card for loyalty challenges, it is going to lead to you losing out on a lot of impact. It’s all about making the right bluff at the right time.

Now maybe you are still scared off by the number of rules you assume govern all these assumptions. But compared to most heavy euro games, Sekigahara is a breeze to learn. On your turn you move and resolve attacks. Movement isn’t terribly difficult: you can move 1 space but can move extra distance if you have a leader in the army or stay on the highway path. If you try to move too large of an army, you move less spaces. The card based combat makes perfect sense and the impact track shades change every 7 impact, reminding you the thresholds to reach to inflict damage. There is a full-page player aid for each player that covers all the ins and outs. Everything about the game is approachable and no one should be scared off with any ideas that it is overly complex.

Forget the “wargame” label for a minute. If you find yourself often playing games with 2 players and enjoy medium-to-heavy games, you should be playing Sekigahara: The Unification of Japan. It is a great tactical battle with ongoing bluffing, tough decisions, and hand management that drives all the gameplay.

It isn’t especially difficult to learn and runs somewhere between 2-3 hours generally. Sekigahara: The Unification of Japan feels both entirely different than the euros I’m used to but in a way that just pushes my brain to deal with the same types of decisions in different ways. It is all about trying to read your opponent, time your moves well, and pick the best fights at the best time.

Final Score: 5 Stars – A deep tactical game that serves as both a good entry into wargames and one that has enough depth to be enjoyed many times over.

Misses:
• There is a lot of stickering to do.