We review Seal Team Flix, a tactical dexterity game published by WizKids Games. In Seal Team Flix, players must work together to take out the enemies in their mission by flicking discs and using other equipment. 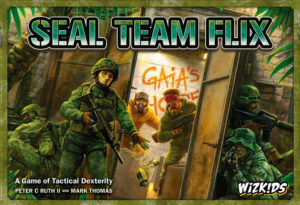 If there were a competition for the greatest name for a board game, Seal Team Flix would be a heavy contender for that title. I’m not sure I’ve seen a greater use of a pun in a board game name. But a title does not determine the games worth, so let’s dive into the gameplay and see if Seal Team Flix is worthy of a coveted spot in your game library.

Seal Team Flix is a cooperative, tactical dexterity game for 1-4 players that plays well at all player counts.

In Seal Team Flix, players take on the role of a group of Navy SEALs sent to stop a group of terrorist doing what bad guys do. To keep things moving, I’m going to give you a high level overview of how the game is played, if you want the full rules, you can download a PDF of rulebook.

Each player gets to load out their soldier with weapons (battle rifles, SMGs, shotguns, and sniper rifles for those curious) and equipment (grenades, suppressers, etc…). Once the mission is chosen and the map is seeded with cover crates, objectives, and Tangos (enemies), you’re ready to begin.

Each game is played over a number of rounds (depending on the mission) that has 8 different phases. While the rulebook is a tad verbose at times, and probably not laid out the best for learning, it’s thoroughness does allow players to pick up the game fairly smoothly.

Players start the round with each of their SEALs taking two actions. The action range from moving (orthogonal only), interacting with objectives (bombs, hostages, etc…), and shooting (the most fun). Shooting is handled by flicking discs (three sizes to choose from depending on your gun selection) at your target. You are allowed to bounce shots of walls and perform any kind of trick shot you can think of. There are even rules for single shots, burst fire, and long range sniping (via a cool side board). However any action completed in line of sight to a Tango will provoke a reaction fire. The Tangos shoot by a simple die roll (miss, wound, or bleeding wound). Shots also create noise tokens, which alert patrols and increase the chance of new Tangos spawning.

After the SEALs actions are complete, the AI runs the Tangos through a series of steps. The flow basically has alert enemies moving towards the loudest area, potentially spawning more bad guys, Tangos seeking cover, and then finally, firing on any SEAL they can see (again with a die roll).

After that, a new round begins. The game ends when either the players have completed their objective, or all the SEALs are dead.

Seal Team Flix excellently meshes a tactical shooter game (think Call of Duty if you are a video gamer), a little bit of dungeon crawling, and some great dexterity gameplay. To be honest, this feels like the nichest of niche markets, but don’t let that dissuade you. This game is a lot of fun for a variety of reasons.

The hardest part about getting in a game of Seal Team Flix is understanding the flow of the game. I wasn’t kidding when I said the 30+ page rulebook felt really verbose and somewhat intimidating. Yet behind those walls of text is actually a smooth AI system that keeps the game flowing nicely once you get a feel for it. Things in Seal Team Flix are setup to be mostly logical. Enemies flow towards the loudest area; they smartly take cover and shoot instead of standing around. Cover itself works like you would expect, blocking discs, and protecting SEALs from damage (Cover can also be destroyed).

I’m glad that the designers made enemies shoot via a die roll instead of flicking. This not only helps streamline the game, but it works much better as this is a coop game and the Tangos aren’t relying on a player’s skill to do their damage. To be honest, this whole game could have just used dice instead of disc flicking, but I’m glad it didn’t. Once you play the game and start doing trick shots, you’ll fall in love. Being able to take out a Tango in cover by bouncing a shot off 2 walls isn’t exactly realistic, but then again, neither are most first person shooter video games.

The missions do a great job of providing a lot of variety for the players. Some will have you hunting for objectives, others rescuing and escorting hostages, while one of my favorite just involved shooting every bad guy in sight. Despite being a dexterity game, there is a lot of tactics and strategy to be used here. Everything from your soldier’s loadout to what routes to take on the game board requires planning and discussion with your team.

If there is an area where Seal Team Flix falters, it’s with its production values. Expect to spend 3-4 hours at least punching out and assembling all the components. However I’m not complaining about the one time investment, it’s more the number of issues I ran into there. Some walls don’t fit quite well, while others are too loose and slide out. A few door frames were so tight I actually tore the cardboard door apart trying to get it out. I ended up spending a lot of time with glue and a xacto knife trying to get everything to fit and stay properly. Overall it was a supremely frustrating experience. But most egregious is that WizKids forgot to print the sentry locations on the boards. You can download of PDF of where they go here, but that kind of oversight is particularly annoying.

However, thankfully the production issues are about my only issue with the game. The game play is incredibly entertaining and I haven’t even touched on the clever sideboards yet. The side boards handle a number of in game things with easy to learn mini games. The sniper rifles actually let you take a shot by flicking discs on the side board instead of the game board. This brilliant solution let players use precision rather than luck of trying to get a disc all the way across the board (when any gun could have also done that). Bomb defusal and lock picking are also handled with their own sideboard, tasking players to flick tokens off the board in a time limit (three tries for lock picking, 10 seconds for bomb defusal).

Seal Team Flix works really well as both a tactical game and a dexterity game. I honestly didn’t expect a game to pull off this mashup as well as they did, but designers Pete Ruth and Mark Thomas expertly created something that will surprise players with its inventive gameplay. It’s just a shame that the components didn’t hold up to the greatness of the game play (which dropped the final score a bit for those keeping track). Thankfully, most of those issues are more annoying than game breaking. Yet I’d still happily buy a second edition if it had better quality boards.

Yet even with the production issues, I still find myself itching to jump back into the gameplay. Seal Team Flix offers both campaign play and one off missions, both of which offer plenty of entertaining moments. Despite only having the game for a month or so, I’d says Seal Team Flix has easily jumped into my top 5 favorite dexterity games and given time, may move even higher.

Final Score: 4 Stars – A brilliant mashup of at tactical shooter game and a dexterity game that will have you coming back for more quite often.

Hits:
• Innovative and engaging gameplay
• Excellent use of sideboard “mini games”
• Lots of opportunities for trick shots and strategic planning
• Great variety in the missions

Misses:
• Game boards suffer from some serious production issues
• Box doesn’t close all the way after everything is assembled