There clearly aren’t enough games to teach kids how to be crimin…, err… spies. Readers who agree with this statement or even those looking for a safe space to allow their kids to be… uh… spies will appreciate this next review. Here we’re taking a look at some offerings from YULU Games in their SPY CODE line.

Plastic handcuffs with interchangeable locks are provided in the box. This allows for the locks to be changed around and provide a variety of difficulty levels should a player be more of a lock-picking expert.

Once players are handcuffed together, the goal of each round of the game is to be the first to grab a pick off the table, insert it into the lock, and unlock the handcuffs. Players will need to manipulate the pick through a 3D maze inside the lock, hoping to unlock the cuffs and grab a scoring token off the table.

Players can play as many rounds as agreed to, but 3-5 rounds in succession seems about right. Players should also rotate the locks they use between players so the mazes aren’t memorized.

Break Free is an extremely original and fun game to play. It’s not as easy to unlock the locks and staring down opponents struggling with their own locks is a legitimate tactic to distract them. The novelty of the game is great with kids and it’s definite fun to play a few times. Once the newness wears off, like many toys, Break Free can be fun again once uninitiated friends come over. 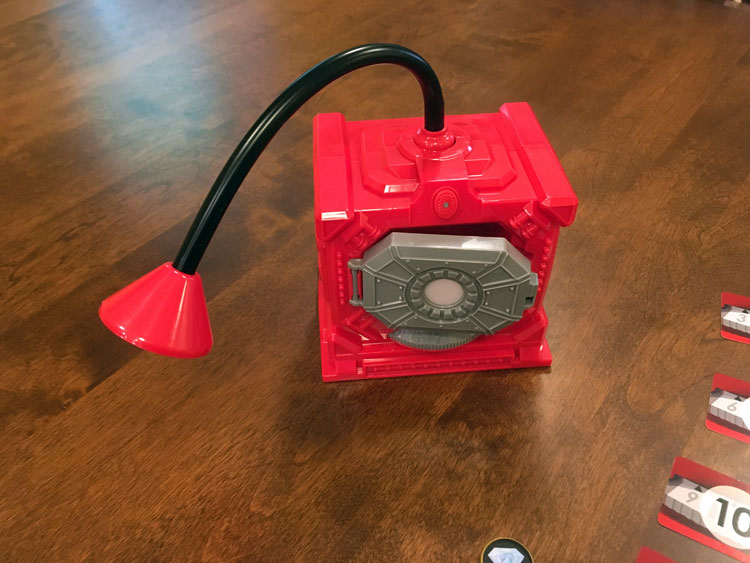 Players of Safe Breaker are attempting to choose the correct numbered card from a display. The electronic safe in the middle of the table is intended to help by providing audio clues, which are listened to using the stethoscope type tube attached to the safe.

To play, a grid of numbered cards is laid out on the table and a set of plastic coins is added to the safe. On a player’s turn, they will select a card, read the number, and then use the safe and turn the dial to match the number. The player will then hear a clue of pings or pongs telling them whether the correct number is higher or lower than the card they selected. Other players will not hear the clue. A player might also hear a police siren sound which means no clue is given because the police are close.

Players take turns selecting new cards until one player has selected the correct number and the safe pops open. Turns are played around the table until one player wins by having a certain value of coins. This is tricky also because an alarm sound from the safe causes a player to discard all their coins.

Safe Breaker has a really interesting mechanism with the audio clues, especially when played where numbers selected are secret. However, the introduction of the alarm sound breaks up the fun with some really random punishment which isn’t very enjoyable. There are good ideas here and it’s entertaining for one play, but the luck factor is something that keeps Safe Breaker safely on the shelf.

So escape room experiences are all the rage these days. YULU has packaged some age appropriate puzzles in a box with the conceit that players are trapped in a room trying to escape. Enterprising parents needing a break from their ambitious crimin… er… spy kids can try to make it as real as possible.

Operation: Escape Room comes with four main components and a set of puzzle cards. It begins by using the Timer Strap device to tie up one player. This also electronically times the game. It’s supposed to simulate some dangerous device locking up one person who cannot directly manipulate the other puzzles.

The first challenge to master is a cage that holds a key. Two sticks that resemble lock picks are available to help manipulate the key through the bars of the cage. This isn’t as easy as it sounds. Dropping the key is pretty common, especially when the game forces you to use the difficult side of the cage. When players manage to retrieve the key, they’ll use it on the next puzzle.

The key unlocks a device called Strategy Quiz Master. After picking a card from the deck (from 3 difficulty levels) the players solve it and then enter the card number and their answer into the device. Correct answers reveal one-third of the next key. Wrong answers reset the device and require players to try another card. Three consecutive correct answers reveal the second key.

Finally, with this key, players will spin a gear-like spinner device while using the key inserted at the top to stop the spinner and reveal one of its sections. The section revealed will tell players where the third key is located in the spinner. This third and final key is used to unlock the Timer Strap device, use the bomb defuse button, and win the game.

Despite being the most elaborate game, Operation: Escape Room requires at least one partner to play. This partner doesn’t have to be the one tied up. The family dog or beloved stuffed animal can suffice as the trapped victim. However, the puzzle solving and timed challenge really benefit from trading off completing challenges.

Like Break Free, playing too many times can feel a little samey, but it’s a great experience for a family on game night. However, players really need to get into the roleplaying spirit. Dressing this up for a small birthday party activity might do the trick.

I’d like to thank YULU games for sending us these games. They’re different and, except for Safe Breaker, a welcome change-up from the usual palette of kids games. They won’t be regulars for our more staid game nights, but they’re especially cool to bring out with dexterity-game seeking friends who haven’t experienced them.