We review Remnants, a real time board game published by Fireside Games. 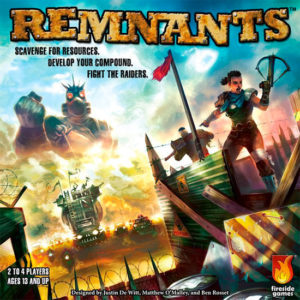 Like most gamers, I’m drawn to certain themes more than others. And for me, I’m a total sucker for post-apocalyptic games. There are so many different types in this genre, such as post-nuclear, rise of the machines, alien invasion, etc. that it’s hard to say I have a favorite; I enjoy them all.

This brings us to Remnants from Fireside Games. This dice game submerges players into a post-apocalyptic world where they control a survivor compound. Players will use their survivors to scavenge and loot for resources to build and bolster their compounds against raiders and mutant creatures, all the while gaining VPs.

Remnants is real-time dice game for 2-4 players and plays between 45-60 minutes and plays well with all player counts.

The game play and phases will be the same for each player – the only difference is that players will choose 1 of the 4 compounds (player boards) that are basically the same except for starting survivors and survivor specialists.

After setup (which Fireside provides a nice diagram for), Remnants is played over these 5 phases (Heal and Clean-Up not listed below).

1. Scavenge: in turn order, players will commit their survivors to the desert for resources or the city for loot.

3. Fight Phase: When the Dread Track cube is on the fight space all players battle enemies on the dread card. Each enemy has a health number, which is how much damage they can take and deal. Players first defend by counting the shield symbols on their development cards and the enemy health is reduced by that amount. Players then fight by rolling dice equal to the number of fists on their development cards.

The round ends with a healing phase (for players that took damage) and a cleanup phase. After the final boss fight, players will add up their VPs from their development cards, VP tokens, remaining survivors, and specialists. The player with the most VPs wins.

I’m going to be honest and tell our readers that I played a 2 round demo at GenCon. Just from that experience I wanted to play this game again and own it. Fireside was nice enough to send a review copy so I could try out the full game, which much like my demo, did not disappoint. I’m not a big “must be a great theme,” guy for a game to be good, but I do have to note that Remnants does a great job supporting the post-apocalyptic theme from start to finish.

There are a few things I really like about Remnants, the first is the real-time rolling for resources. I’m not good at real-time rollers but it fits the game so well that whether or not you’re good at quickly rolling dice and processing the results, you’re still going to have fun. It also adds a great tension element that most game lack and a little fear can be a good thing.

The second element is the specialist survivors. I absolutely loved these and that each has its own ability. I’m not sure which is the best but it was lots of fun to try them out and see how they could improve getting or carrying more resources or acquiring more loot. I also liked the fact that if wounds are dealt to survivors that the specialist can take a wound but then loses their ability until healed.

As much as I like the specialists, it was a miss for me that there is not a warrior specialist that could add dice or pips to the fight phase. Having to rely solely on development cards for attack is not terrible, but more options during the fight phase would help especially when playing Remnants at 3-4 player counts where gathering resources and buying development cards – you usually don’t end up with your first choice (or second or even third).

Another negative is that the badlands and dread decks should be much deeper. The development deck is a good size, but the other two could use some more cards to mix up the game experience and after 3-4 plays you will start to see the same cards. More cards would have helped the replay value. I understand that the price point is low for this game but cards should be cheaper to manufacture. These decks should have more cards and maybe a future expansion could help bolster them.

I will warn players that luck can be significant to the game play. Dice and decks will not always go your way. Bad draws and poor dice rolling can sour some players from future plays. Remnants does try to help balance chance with specialist abilities, development cards, and scrap and screwdriver loot. Unfortunately, there’s no cure for bad luck but Remnants does try give players chances to improve it.

I do want to admit that I had a hard time just classifying Remnants as just a dice game. It has many different elements to it that make it enjoyable like engine and pool building. To label it just a dice game doesn’t do it justice but trying to label it a dice engine builder seemed odd.

In any case, Fireside has made a fun and well supported post-apocalyptic themed game. The real-time dice rolling and survivor specialist elements bring Remnants back to the table for me. A warrior specialist and deeper decks would have made this one more fun and help future replays for most.