We review Q.E., an auction game published by BoardGameTables. In Q.E. players are trying to earn the most points by buying up companies in a secret auction. 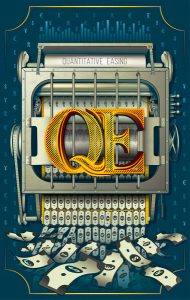 Auction games take many forms in the board gaming hobby. Sometimes auctions exist as a smaller part of a bigger game. In others, the auctions are the game. Well, Q.E. is definitely the latter. But you don’t even need to worry yourself here about managing your resources. They are infinite.

Don’t worry about trying to math out exactly how much each point is worth—inflation is going to run rampant on that. Money is no object, feel free to go spend millions. Or more.

In Q.E. players take the role of countries; bidding on companies that represent various industries. Each company has a few key pieces of information: its immediate value, the country it represents, and the type of industry. As you win a bid for a company, you’ll be earning points towards collecting sets of the same industry, or diversifying into multiple different ones, and also earning bonuses for companies from your home country.

The trick is this—there is no money. Our countries have determined that despite the global recession, these industries must be saved. You don’t need to have any money on hand, you can always print more. You just write a number on your blank check and the cash will eventually show up, we assume. Want to bid 100? No problem. Or 1,000,000. Or 500,000,000,000.

One player will be the auctioneer for this auction and will start by bidding any whole number but must bid at least 20. The auctioneer is the only public bid, everyone else at the table will write their bid and pass it secretly to the auctioneer. The higher bid will be written on the back of the company tile and passed to the winning player. How much did it cost? That secret is only known to the auctioneer and the player who won.

The game ends after all companies have been purchased. Whoever spent the most money is immediately eliminated. Of the remaining players, the one who spent the least gets 6 additional points and whoever has the most is the winner.

Inviting someone to play a game of Q.E. is almost as fun as the game itself. “Hey, you want to play an auction game where you can just make up numbers and bid anything in the world?” Q.E. isn’t about being clever and spending your money at the right time, on the right things.

It’s a unique design and the experience lives up to the promise that the back of the box is selling you. Maybe the first company sells for 1,500. Maybe the last one sells for 2.3 million. But there is no rule that says it must be that way. You can always try to start an auction at twenty bucks and just see what happens. The auctioneer kind of sets the baseline and the players make their own decisions. And you’ll bid what you are absolutely sure is just too much, only to lose the bid and have no idea if you were even close.

Throughout the game, your interest in various companies will change. If you can get multiples of the same industry, you’ll score points for monopolizing. Once you have two agriculture companies, the third one is going to be worth quite a bit to you. However, there are also points for diversification so getting different companies can be valuable too. Really, every company is good.

I’d prefer it if the scoring really gave the players a larger incentive for some of the companies. Especially early in the game, you’ll just want every company you can get, without worrying too much about its particularities. Also, the same companies are used every game and they will always all be auctioned. The only variety is the order in which they come up for offer.

While Q.E. supports up to five players, it really plays best at 3-4. Prices do tend to go up over time and with a full five players that is even more likely. If you are the last player to be the auctioneer in a five-player game, you are going to go a long time without having any information about what kind of bids are winning.

There is an added rule with five players that once per game another player can peek at the winning bid to help alleviate this. Yet I still prefer Q.E. with less. It’s more likely that prices can fluctuate up and down throughout the game and you feel slightly more in control of what is happening.

Q.E. is really a party game disguised as an auction game. The emphasis isn’t on some kind of strategy, managing your resources, or understanding the value of the items being offered. Instead, everything you bid on is pretty good and the fun comes from the experience, the crazy numbers, and the secret information.

Most folks are going to enjoy Q.E. as they try to understand just how much money is being printed by the folks at your table. The lack of variety and interest in the companies themselves are all that hold it back from being great.

Final Score: 3.5 Stars – An experience you can’t get close to with any other game. Strategy may not be deep, but fun is abundant.

Hits:
• A unique take on auctions where you print your own money.
• Plays quickly and has a hook that is sure to get people to the table.
• Wonderful production of dry-erase boards and company tiles.

Misses:
• Companies lack variety and all are used every game.
• Doesn’t play as well at 5 players as info is too scarce.