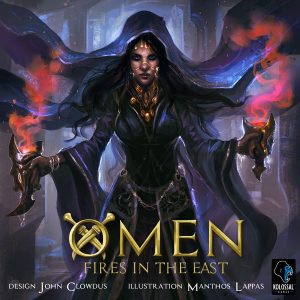 Dueling games aren’t terribly difficult to find. There is the ever present Magic the Gathering, or, if spending your entire paycheck on a single game isn’t appealing there is a smattering of LCGs or the brand new unique deck game, Keyforge.

But today we are looking at Omen: Fires in the East which has the feel of other dueling games but without one important factor. There is one single deck that players will draw from. No construction, no customization, and rare card-chasing. Simply shuffle the deck and both players will draw from it. So, let’s take a look at how it plays.

Omen: A Reign of War is a two-player game designed by John Clowdus, first published in 2011. Thanks to a recent Kickstarter campaign, it’s back with revised rules, art, and some new content thanks to Kolassal games. Omen: Fires in the East serves as a stand-alone game as well as an expansion if you want the full Omen experience.

Players will be battling over control of three cities. Each turn you start by getting three coins and/or cards in whatever combination you wish. Each card has three different important numbers—a cost to play, a power when it’s played to a city, and an offering value. You can get additional resources at the end of your turn by discarding a card and gaining cards/coins equal to its offering value.

After you’ve acquired your resources, you can play any number of units to cities that you can afford to. After this step, known as the surge step, is completed, if any city has a total of five units or three opposing units, it becomes war torn. War torn cities will then resolve and the player who has the most power in that city gains a reward tile worth two victory points. Casualties are a harsh reality of war, however, and the winning player must discard all but one unit from that city. The loser gets to keep two of their units, giving them a leg up in the next potential battle.

There are a couple other ways to score victory points throughout the game. Some cards have a ritual effect that can be triggered by completing an offering. The Sphinx units in the game are considered to be treasured and are worth a point if you are still holding them in your hand.

The game ends when two cities have been emptied of their reward tiles. Players will total their victory points and the player with the most points has won the favor of the gods and is the winner.

For a game that only comes with 22 different unit cards and a handful of cardboard coins, there is a surprisingly amount of depth here. Omen: Fires in the East gives the dueling battle feel with a strong emphasis on good timing and managing your resources. Every time you pass the turn over to your opponent, you must be concerned about what they are going to be able to do.

Most of that tension is centered around the rules of when a city becomes war torn. From a pragmatic perspective, this makes putting three units into a completely empty city a potentially strong play. You know that the city will go to war after your opponent’s turn, but they will still have a chance to potentially deploy enough powerful units to win that battle. You must really make a lot of decisions with imperfect information about the amount of resources they have and what they would like to do.

Of course, you don’t have to deploy units three at a time. Some of the units, like the merchants, give you abilities the longer they stay in play, so you’ll be looking to keep them out of war as long as possible. But once you start populating cities at all—even with just a unit or two—it makes it easier for your opponent to flood the city with enough units to increase the total to 5 or more and trigger a war on their turn.

While most of this exists in the original Omen: A Reign of War, Fires in the East introduces some new types of unit to the game. The most interesting of which are the priestesses who have a ritual ability that can turn them into victory points if you make an offering that meets their demands. Considering that completing a ritual is worth the same number of points as winning a war, it can be a valid strategy and gives the game some interesting decisions as it effectively turns them into multi-use cards.

As a standalone product, it does suffer a bit from lack of discovery. In a single game you will draw through the deck completely. Maybe multiple times. The twenty-two cards here pack a reasonable amount of strategic depth but not a lot in terms of raw content. It’s perhaps this lack of content that the games we played tended to feel the same from time to time. There aren’t a lot of surprises to come. That said, Fires in the East may be a fine place to get your feet wet with Omen.

Omen: Fires in the East is a fun, tense dueling game. It is way more approachable—in terms of both rules and budget—than any of the CCGs or LCGs on the market. The focus is largely around good timing and management of your resources to fight over war torn cities, but there are certainly other ways to score additional points.

As an inexpensive entry into the vast amount of Omen related content, Fires in the East is certainly a fun experience. If you enjoy yourself though, you’ll likely need to be in the market for additional Omen products as the games containing only Fires in the East doesn’t have enough surprises to really keep you interested over multiple games.

Final Score: 3.5 Stars – A good dueling game that probably is better used as an expansion than a standalone.

Hits:
• Unique take on two player battles as the deck is shared between players
• Interesting decisions to be made
• You can get new players playing in less than 10 minutes.

Misses:
• Games tend to play out fairly similar.
• Twenty-two cards aren’t enough to really explore much in the way of different interactions.