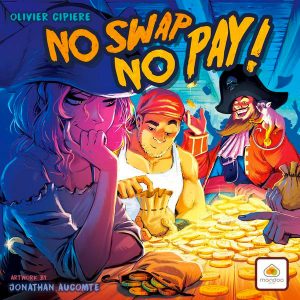 Yar, matey! It’s the end of plundering season and it’s time to divvy up the spoils. Naturally, a pirate is only concerned about what they reap and having the most riches. Pull up a peg leg, uncork the rum, grab the loot bag and let’s discover if a pirate’s life is for you.

No Swap, No Pay is played over a number of rounds, where pirates will be drafting coins from the table, challenging others for their loot, and donating a coin from their bag back into the center treasure bag. After all the rounds are completed, pirates empty their bags to pine over or pout at their loot. The pirate with the most booty wins.

The trick of the game is to not get stuck with a bad combination of coins. But just like real-life pirates, not all that glitters is gold. In fact, there are silver, black, and purple coins in addition to gold, all with different values. For instance, having 2 or fewer black coins at the end of the game means your bag o’ booty is busted. However, if there happens to be a purple coin, which is a wild, in the booty bag, well you could make that another black coin or any other coin.

No Swap, No Pay is fast and easy to get set up. Referencing the rule book gets this process done quickly with the spreadsheet for a 4-5 player setup. The first few rounds we kept the rule book out just for reference, but quickly picked up our cadence and made our way through phases and turns with ease. There were a few “should I do this?” moments with deciding who to challenge, but usually, this passed with them offering their bags. It was hard to know what the final scores would be until the end, so if luck-based or random games aren’t your thing, this game might be a pass.

I had an opportunity to play this at both 3 and 4 players and believe that 4+ should be the preferred count. When played with 3, there is a minor difference, in that a dummy bag for Davy Jones’ ghost is set up. While this does add a way to gamble by swapping bags with an unknown element, as Davy Jones will always swap with his challenger, it lowers the player interaction and can be easy to forget or ignore the bag.

But unfortunately, even at the ideal player count, I didn’t find the gameplay especially meaningful or fun. We figured out fairly early on that players could always offer their bags to be drawn from during the challenge phase, that it wasn’t until the final round that one might want to consider swapping their own bags if they hadn’t been able to remove black coins. When we were finished, it was the general consensus that while the game lasted about as long as it needed to, between No Swap, No Pay and other available filler games, we’d likely select something else.

The plastic coins have a nice feel and weight to them. The included bags do their job holding the coins, although the personal tan draw bags are a touch small if players have larger hands (ie. adults with normal hands). The rulebook is easy to follow and teach on the fly. There is a minor discrepancy, as there is a reference to a blue coin. There isn’t one and it should be understood that this refers to the purple wild coin.

No Swap, No Pay is a light game that fits between the heavier ones, or that “just one more”, end-of-the-night game. It has a place in lighter game nights, where socializing takes priority over complexity. The rulebook and player aids will help ensure set up and teaching will take limited time, getting the game to the table quickly. Planning and strategy will be limited, but the game plays so quickly, this may not matter much. The game lasts just as long as it should, but with a lack of fun or entertaining moments, it will likely get squeezed out for other light games.

Final Score: 3 Stars – No Swap, No Pay is light and doesn’t overstay its welcome. It just might not be welcomed much after a play or two

Hits:
• Simple to teach
• Enclosed player aids are useful for coin values
• Complexity and playtime are appropriate for the game

Misses:
• Rulebook contained minor reference error
• Draw bags a bit too small for larger hands
• 3-player count isn’t as interactive as 4-5
• Likely to have other light games selected over it