We review Ninjitsu, a bluffing and take that style game published by Jelly Bean Games. In Ninjitsu, players are trying to be the first to acquire twenty one points of treasures through the use of actions, cards, and traps. 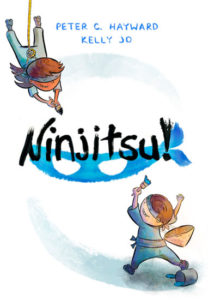 When I’m browsing tabletop games on Kickstarter, the first thing that usually gets me to stop and check out a campaign is the artwork. Some great visuals can easily suck me into a campaign page that I would have otherwise ignored (and the reverse is true as well).

Because of that, I distantly remember checking out the Kickstarter page for Ninjitsu last year. I loved the whimsical, watercolor artwork and I made a mental note to keep an eye out for it in the future. Thankfully, Jelly Bean games sent me a review copy and I was able to see if the game play held up to the great visuals. So let’s find out if it does.

Ninjitsu is a bluffing and take that card game for 2-5 players that takes about 5-10 minutes to play. The game plays best with 3-4 players.

Playing Ninjitsu is simple. The goal is to be the first player to reach 21 points. Treasure cards will have different values on them (from 0-10) with many cards also having a special ability.

On a player’s turn they take one of the following actions:

Turns go by in that manner until one player has 21 points at the start of their turn and wins.

As you can tell from the rules above, Ninjitsu is a very easy game to learn. It shouldn’t take more than a minute or two to explain the rules, and players should just be able to dive right in. In fact, I think the 8+ age range is probably a tad conservative. I could see younger kids playing this one, especially if they’ve been gaming with you for a while.

To go along with the simple rules, Ninjitsu is also fast to play. Expect games to take 5-10 minutes at most. Heck, I’ve had a two-player game take about 2 minutes with some lucky draws. And as the game is only a deck of cards, it’s very portable. You can easily ditch the box and just throw the cards in a bag or rubber band them to take on the go. Ninjitsu requires only minimal table space so this could easily make a good “pub game.”

Now while Ninjitsu is clearly a filler game, there is actually a surprising amount of depth in the game, even with its simple ruleset. While players only have three options on their turn, actually deciding what to do isn’t always so simple. That’s because at the heart of Ninjitsu is the mind games, which is also what gives the game its charm. Playing cards for actions are fairly obvious, and treasures are great to score points. However, when you have a face-up treasure, everyone knows how close you are to winning. So it’s the secret cards where the fun in the game lies.

Secrets can either be treasures or bombs. Treasures are great, because no one knows how close you are to winning. That face-down card could be a 10 point treasure, getting you almost 50% of the way to victory. Or it could be a trap that screws over the player that steals it from you. If your group is the kind that loves mind games like this, or just messing with other players, you’ll have a lot of fun with Ninjitsu. There have been times I was sure someone put a trap card down to tempt me, only to find out later is was a high point treasure card. However, when you can successfully bait another player into stealing one of your trapped cards, it can be a thing of beauty.

Ninjitsu is easy to learn, quick playing, and has the potential to be a ton of fun with the right group. Messing with other players’ heads brings a lot of enjoyment to the game, at least for this reviewer. However, Ninjitsu can also be fairly random, with someone getting the right draw and ending the game pretty quick. But as a 5-10 minute filler game, that doesn’t bother me that much. Plus, I love the artwork. The watercolor style and whimsical nature is perfect fit for the game and its playstyle. Ninjitsu can be a great choice as a game to play with your young ones, or as a filler game to play on game night with your group.

Final Score: 3.5 Stars – A quick playing filler game that will slot in nicely with groups who like to play mind games with each other.

Misses:
• Can be a tad random