We review Museum Heist, a hidden movement and bluffing game published by Fox Mind. In Museum Heist, players are trying to get their selected character to the artwork first, all without tipping their hand as to which character they are. 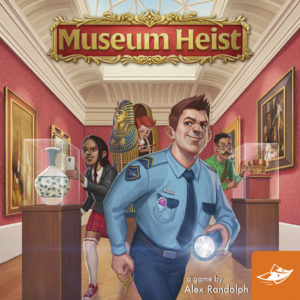 One type of movie I enjoy is a heist film. While the basic plot is mostly the same: the main characters plot out the job, something goes wrong, and they have to think on their feet to complete. It’s the last part that makes me enjoy this type of cinema. I’m a person who likes to see a puzzle and try to find a solution.

Today, we will be reviewing a game that takes an abstract look at stealing artwork in Museum Heist. Players must move the criminals closer to the artwork while not revealing which criminal they chose for the round. Let’s get to the review to see if this abstract game can steal a spot in my collection.

Museum Heist is a bluffing movement game for 2-4 players to play in about 20 minutes. In my experience, the game plays the same with all player counts.

Museum Heist isn’t a game about trying to get past security. Instead, it is about outsmarting the other players. Each round, players will decide which of the seven thieves they are going to pick to try to be one to land on the artwork token. Players will have only a few options each turn.

They can choose to move any character token on their turn. One requirement of this movement is that you have to move closer to the artwork token. Characters can use their movement to jump over another character as well, similar to checkers. You can also move onto a secret passages space and move to other areas of the board quickly. Each player also has a limited number of swap tokens that they can play to swap the locations of two character pieces on the board.

The last action you can take is to challenge another player. This means that you call out who you think that player has chosen this round. If you are wrong, you are out of the round, but if you are right you collect the artwork token.

I was a little disappointed with the abstract nature of the game. I was hoping for more elements tying to the theme of the game. Actions that would help you outwit your opponents other then just to sneak around the board. Sadly, that game isn’t in this box and with the lack of connection to the theme, the mechanics of the game must try to win me over. And for the most part, they did.

Everything in the game is designed around the bluffing element where you don’t want to give away which one of the seven characters you selected. Instead of just blindly moving your character toward the artwork token, you must put a shred of doubt into the other players minds so they don’t call you out. I found the best way to do this is to move characters into positions so you can make multiple jumps to claim the artwork. You are trying to orchestrate the characters into positions.

Unfortunately, this great opus falls apart when other players start moving the same characters. While this can be frustrating, you must adjust to their movements or attempt to figure out which characters they picked. I tend to shy away from bluffing games because they are not my favorite type of game. This one combines the movement and bluffing in unique way that makes me enjoy it more than I normally would.

One of the biggest strengths of the game is how it’s extremely simple to teach. You are not bogged down with a bunch of actions. This simplicity makes it easy to introduce to non-gamers who might be turned off by other games that are more complex. While I praise the simplicity, the gameplay left more to be desired for my gaming mind. A game is quick enough to not make the game suffer, but nothing I want to play over and over in one setting.

One of the great surprises about the game is how much my kids enjoyed it. It took about a game for them to understand the nuances of making your moves. Once they got that they were able to mask their movements, but they enjoyed trying to pull a fast one on their dad. It gives me the chance to teach bluffing mechanics in a game that doesn’t take a ton of time to play.

Museum Heist is a game that will find its way into my collection. It is a quick and easy bluffing game that adds an interesting movement mechanics. The options to pick your own characters allow the game to feel more open in the decision making process rather than just random selection. The game accessible to anyone, even kids, as they learn the basics of bluffing and hiding your movement. There isn’t a ton of depth with the Museum Heist, which leads me to drop it slightly, however if you are looking for a game to play with the family be sure to pick up Museum Heist.

Final Score: 3.5 – A solid abstract bluffing and movement game that is accessible to everyone in the whole family.

Misses:
• Too simple for season gamers
• No strong tie to theme
• Difficult to set up long term strategy