We review the hidden role and bluffing game Microfilms, published by Ludicreations. In this cold war era spy game, players are trying to figure out alliances and find the enemy microfilms before it's too late. 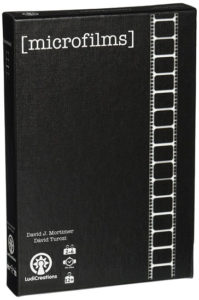 Hidden role games have gradually become more common over the last several years. From Love Letter (and all of its iterations) to Coup, Masquerade to Citadels, each has its own theme to complement a new twist on the hidden-role mechanics. Ludicreations’s [microfilms] (henceforth referred to as Microfilms) follows a Cold War Era theme with some unique hidden shuffle mechanics to mix it up.

Microfilms is a hidden role card game for 2 to 6 players that takes about 20 minutes to play. It plays best with 5 players.

In this hidden role game, players are randomly given the role of a spy from the USA, USSR, UK or China, while in games with more than three players, the hitman, interpol officer and information specialist are also thrown into the mix. At the start of the game, two spies are allied together as indicated by the two representative alliance-envelope cards (think passing notes) in the draw deck. The third spy is on her own.

As with most hidden role games, players have to deduce which player has a specific role or holds a specific card. Hands are comprised of at least one action or item card and a role card. Action cards or points (called francs) are spent to complete various actions that may result in seeing an opponent’s role or action card, but because of a below-the-table shuffling rule, target players don’t know which of their cards is seen for sure.

While the objectives are unique for each type of role, they are generally “reveal the player with X card” and be clear of suspicion. The lone spy has to determine who is allied by seeing the two alliance cards and reveal a microfilm card from the allies while the allied spies have to also determine who is on their team by seeing the alliance cards and reveal the microfilm card of the opposing spy.

The cards are of decent card stock and I am a big fan of the low profile of the box. Francs and suspicion cards are of thick cardstock. The artwork is iconic for Ludicreations black box games which includes [redacted] and even if I am not a fan, it is consistent. I like the minimalist styling of the box art and would have liked it if that was carried over onto the cards themselves. The rulebook could use some cleaning up, but I don’t know if there is much that could realistically be done there. As you will see below, a few graphical decision-tree cards or sheets might make the game easier to play.

A link to the rulebook is located on the Ludicreations’s website and you may want to reference that as we go along. This is going to be a bear.

First, role cards are randomly dealt to each player along with one action card. If you are playing with more than three players, you remove one spy role card from the game and incorporate the other character roles into the deal. Additionally, the three spy alliance envelope cards are shuffled together and one is removed from the game randomly. The surviving two envelopes are placed face down on the draw deck. The three microfilms from the three spy home countries are added onto the deck.

A double-sided suspect/cleared action card is given out to each player and placed with the suspect side up. Player hands consist of one role card and one action or item card. Francs are doled out based on the number of players.

On a turn, the player can take one of the following options: draw, pass, bribe, action or win. Draw means to draw cards, pass earns money and bribe has a decision tree in that rulebook up there. Actions and winning are explained below.

Actions are listed on the suspect/cleared card and change based on whether a player is a suspect or not. Generally, actions consist of playing a card to steal/blackmail, cash-out/blowback or interrogate/blackmail. Interrogating or blackmail can also be completed by paying francs if a player lacks the action card.

To win and end the game, the active player must be cleared and their role specific win condition must be met.

First the good – they did it! Ludicreations found a solution to the “I know you know what I know” component of hidden role games and replaced the typical bluffing mechanic with a deduction one.

Now for the less than good, Microfilms is fiddly, very, very fiddly. Like… unfun, overly complex for 25 cards, fiddly. The player count sweet spot is definitely with more than four players because of the varied objectives that the higher player count introduces. Unfortunately, with more players, gameplay becomes chaotic tracking your own objective, those of other players and their actions. You would think playing with the minimum player count would cut down on this, but that makes the game fiddly and uneventful instead. It is hard to play through Microfilms enough times to make the objectives and actions seamless enough to not need to reference the rulebook constantly.

Additionally, actions that can be completed with action cards or the shoehorned money component are all overly complex. Action outcomes force a decision-tree-like list of rules to be referenced in the rulebook constantly and the game stalls nearly every turn.

The fact of the matter is that the under-the-table shuffle mechanic is unique and it does provide something new for a rather saturated genre, but Ludicreations missed the mark when they decided to remove any bluff aspect and add in the kitchen sink of action outcomes. It would be great if there was a way of mitigating the chaos, but there was a whole lot of “I don’t know what I’m doing,” “Me neither, just finish your turn” each time I played with different people (because no one wanted to play a second time).

Player roles and objectives are extremely unbalanced. Spies have a two-phase win criteria with first discovering who is allied against whom by finding those two envelope cards and second revealing the enemy microfilm. At the very least, the role cards live with the players for the duration of the game and have no way of moving around the table, which cuts down on the complexity of figuring out motives a bit, but, frankly, not enough.

For the end game, spies are first searching for one another and then a microfilm while everyone else is searching for some item straight away, which makes it all seem very sideways and unbalanced. Out of the gate, spies are completing a two-phase objective and virtually everyone else is just firing shots across the bow. This makes the game feel as if there are two separate games being played at once (which is entirely possible depending on how the cards are dealt) and forces a 25 card microgame to feel bloated and overly complex. Everything outside of the spy roles simply feels like it should have been an expansion, like an afterthought to extend the life of a game enjoyed by players who are already familiar with the rules.

Ludicreations was onto something. They were so close and I would count myself among those willing to play version 2 or another game with a similar shuffle and spy mechanic; however, until that time, this version of this game, just doesn’t do it for me.

There are so many hidden role games out there that the odds were stacked against Microfilms from the beginning. Frankly, they couldn’t do it better, but they did try to do it newer. You might think the shuffling aspect simple, but it does change the game flavor quite a bit.

Likewise, the two-phase alliance and reveal of the spy roles is interesting. That being said, you may enjoy Microfilms and you may find it refreshing, so for those of you who are intrigued, here is my recommendation: check out the rulebook, play through a round in the theater of your mind. If you can keep everything straight, buy the game, but if you are like me and it is a bit too much, keep Ludicreations in mind for its next go around and, in the meantime, go play some Masquerade.

If you’d like to pick up a copy of Microfilms, you can get it for about $10.

Final Score: 2.5 Stars – A microgame too bloated to get out of its own way.

Hits:
• Hidden shuffling mechanic changes the feel of the hidden role game
• Hidden alliance cards in the draw deck are a fun twist with which to contend
• Components are made well

Misses:
• Overly complex and could stand to be streamlined
• Too many action choices in the decision-trees
• Feels like half the game was an afterthought