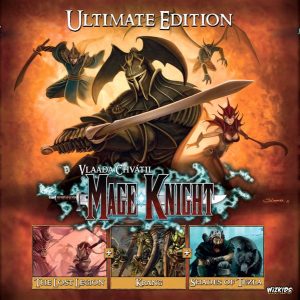 “Here. Review this,” said Tony. He threw Mage Knight: Ultimate Edition at me.

I caught it and went home to start my review. This new edition of Mage Knight contains painted minis, three expansions, and some new cards.

Note: I cannot waste words when there is too much else to talk about. There is no room for my usual intro fluff.

For this review, I played multiple games at player counts of one or two. Game length varied based on number of players and the complexity of the scenario played, lasting from 60 to 120 minutes.

The game is played over a predetermined number of rounds based on the scenario. A round is made up of the following phases:

The game ends when either the scenario’s a) end game condition is reached or b) round limit is reached. The scenario’s rules will determine the winner.

I HATED the original Mage Knight. To be fair, my first game was with five players, four of whom were new. I gave up after only having two turns in one hour. But then I read about how good this game was as a solo or two player experience. Then the new Ultimate Edition was released, so I decided to give it a second chance. Boy am I glad I did.

This game is now one of my favorite solo and two player games. I LOVE this game!

There is too much to cover in this review, so I simply am going to tell you what I liked and what little I’d not like. If you want to learn how to play, there are plenty of resources available for that already.

NOTE: The Ultimate Edition includes the base game, three expansions (The Lost Legion, Shades of Tezla, and Krang, a new character), reformatted rules, and five new cards. Due to my past experience, I refuse to play with more than two players.

I absolutely love the card play and hand management in Mage Knight. The puzzle aspect of maximizing the cards in your hand, be it moving, attacking, or influencing, is why I enjoy this game. For example, even if your card’s total movement falls short of your desired destination, ANY card can be turned sideways to add +1 to your move.

An additional layer to this card management puzzle is that the end of a round is determined by your card play. Players have sixteen cards in their starting deck, with a hand limit of five cards. Every round you can play as many or as few of your cards, optionally discarding any unused cards and then drawing back to your hand limit. If a player’s deck is empty at the start of the turn, they can announce that the round is over. That player forfeits their turn and all other players get one more turn. So, if you plod along conservatively playing cards while your opponent is blowing through their deck, you could be stuck not having used all your cards before the end of the round. I really enjoyed the tension this creates.

This same tension is simulated with a dummy player in cooperative or solo games. Usually, I hate dummy players, but this dummy player is simply a clock that discards cards randomly based on card draws. This prevents players from taking their time because the round will be over if the dummy player’s deck is empty.

Developing your character is well designed. You can purchase (Influence, using game terminology) new cards for your deck in the form of spells from Mage Towers (as long as a player has conquered the tower) or by learning advanced actions from a monastery (you don’t have to conquer these for access to these new abilities). Leveling up by gaining fame through your actions also provides rewards. Even-numbered levels grant one advanced action (another card for your deck) and two skill tokens (draw 2, keep 1). In a multiplayer game, if another player levels up, they can choose to take any skill from the common pool instead of keeping their own. I loved having the option to expand beyond my character’s normal skills.

Odd-numbered levels improve your armor value or hand limit as well as provide an extra command token…wait, what is a command token? They allow you to command units that you influence to join your side. These cards do not go to your deck, but in front of you in a tableau. The more command tokens you own, the more units you can control.

While all this talk of growth, leveling up, and character development is great, you can’t grow without fighting monsters and exploring the land. Similar to many aspects of Mage Knight, combat is a puzzle. It can be a bit difficult to grasp as first, given the four phases of combat combined with the varied abilities of the monsters you face. That being said, it is another aspect of the game that I grew to love. I really appreciate when my planning leads to conquering a mage tower or a dungeon; however, if your planning was not perfect or you calculate that you will win but still are wounded, wound cards will be added to your deck. These can only be discarded by resting, which takes precious time, but can be removed by healing. Should you delay your travels by visiting a village to get healed? These are the tough choices Mage Knight forces you to make.

You do have to explore the land to reveal rampaging enemies to be defeated, claiming keeps, or visiting villages. I enjoy the impact your interactions with these locations have on your character. Your character has a reputation. It will improve with heroic deeds like defeating those rampaging enemies but will tumble when you burn down a monastery (but those sweet, sweet artifacts JUST might be worth the reputation hit…) If your reputation gets too low, you won’t be able to interact with the locals.

Another aspect of the game I thought was well designed is the mana system and the Day/Night cycle. Mana dice are rolled at the start of the turn. This pool of mana is available to everyone. You can power up a card by using either mana tokens (temporary mana), mana crystals (permanent mana you have earned), or by using a die from the source (a.k.a. the place you store mana dice). Tokens and crystals return to the supply, whereas the die is rerolled.

If it is day, black mana is dead and can’t be used again, while the same is true of gold mana at night. I liked this aspect of chance tied to mana and figuring out which cards to improve knowing the mana might not be there next turn. Another minor, but thematic, aspect of the day/night cycle I appreciated was that travel times in the forest and the desert improve or become worse depending on the time of day.

Finally, Mage Knight also offers excellent replay value. The number of characters, scenarios, variants, game types, the number of cards, the random map…I could go on and on. Every game is a different experience.

As much as I really like Mage Knight, it is not perfect. I personally find this game unplayable beyond two players. There is considerable downtime at any player count above two. Another issue are the characters. While the character growth options are great, there are only two unique cards in each starting deck. The other fourteen cards are the same for ALL characters.

I’m really glad I gave Mage Knight a second chance, because it was fantastic! The character growth, the options, the replay value, and the decisions it provides are amazing. The only thing keeping Mage Knight: Ultimate Edition from getting all five stars are my minor complaints above. If you are looking for a game that consistently challenges you while providing an almost endless amount of replay value, Mage Knight: Ultimate Edition is the game for you.

Final Score:  4.5 Stars – A cooperative exploration and deck building game that provides a wealth of options and tons of replay value.

Misses:
• Lack of differentiation between characters at the start of the game
• Way too much downtime in games with more than two players