We review Luna Capital, a card drafting and tile-laying game published by Devir Games. In Luna Capital, players are trying to earn the most points over the game's four rounds. 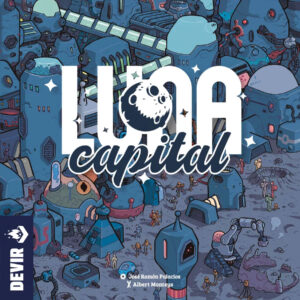 Finally, we’ve been selected to fly to the moon and play among the stars. First things first; we need to develop the lunar landscape and make it viable. Next, let’s add some life support systems. Now, residential complexes and meteorite access. And don’t forget the sales offices to keep those space profits flowing.

Enter LUNA Capital, the newest entry to the Devir Games lineup, designed by José Ramón Palacios (La Viña) with artwork from Albert Monteys. This card drafting and tile placement game re-imagines the concept of lunar colonization by returning us to the year 1977, a time of space ambition and now-retro aesthetics. It’s equipped for one to four players and plays in approximately forty-five minutes.

No one said the pioneer life was easy. So, strap in, keep your business mind sharp, and prepare to launch into a brand-new world full of strategic opportunities.

LUNA Capital is played over three phases (A, B, and C), each consisting of four rounds. In total, there are twelve turns per player. Players begin with a Sponsor tile showcasing their lunar enterprise, three corresponding identification tokens, as well as a hand of three construction cards. The goal is to build a settlement that scores the most points, thus becoming the most illustrious location for the moon’s capital.

Each round, the board is seeded with four construction cards and corresponding project tiles based on the round number. The first round features only one available project tile per card, whereas the fourth round features four total. Starting with the first player, a set of card and tile(s) is selected. The column chosen is not refilled until the start of the next round.

After selection, players then play one card into their tableau. Each construction card has a number from one to ten printed on it. The tableau consists of three potential rows where cards must be placed orthogonally in increasing numerical order, left to right. Construction cards may also feature preprinted structures that may help or hinder the settlement.

Once the construction card is placed, all project tiles selected must now be placed onto any settlement. The placement of tiles dictates the scoring potential at the end of the game. There are several project tile options that emerge in a single game. Vital systems score either based on adjacency or via set collection. Construction buildings score based on the surrounding project tiles or types of buildings present in the settlement. These tiles can also be placed on top of preprinted lunar scaffolding that appears on some cards.

Beyond these tiles, the game comes with sales offices, moon landing grounds, demolition teams, selenite robots, meteorites, and logistics redistribution tokens. Each of these provides additional scoring opportunities and ways to manipulate the tableau to create better options. For example, meteorites present in a tableau are counted at the end of the game, and the player with the most scores additional points. It seems that these space rocks hold a certain scientific interest as they contain plenty of innate riches.

Each game features two short-term concessions and one long-term concession. These feature specific public scoring opportunities. At the end of a round, players claim a concession if they meet its requirement. If one is claimed early on, it’s unavailable to claim in later phases, so being mindful of these opportunities and an opponent’s tableau is important.

After the twelve rounds, final scoring determines the winner. Players add up their individual concession and tile placement points. Any cards still in hand also score.

I must admit that I was a bit dizzy on the flight to the moon. Rather than watch the latest space film and enjoy a ginger ale, I chose to read the game manual. This rulebook, while comprehensive, is a little overwhelming at first as it provides too much information upfront. Each project tile is given a thematic description of why it’s necessary in the settlement. This, coupled with not having a dedicated player aid or single page for reference, kept me coming back to determine what each tile represented.

In other words, it took a few games to navigate that space and settle into the strategy. LUNA Capital borrows its mechanics from other games, but the combination of drafting and tile placement feels fresh. Each round sees the options increase, and while space for placement also increases, there’s a limited framework available. Being able to place tiles in a way that allows for proper expansion can be difficult if the construction cards don’t allow room or cannot be placed in correct alignment.

Thankfully there’s a built-in direction to each game based on the short- and long-term concessions. These provide clarity when options get too diverse. They also drive the much-needed player interaction element. Without the incentive to complete concessions before or at the same time as opponents, the game atmosphere would be too heavily weighted to multi-player solitude. Concessions ensure players keep an eye on each other. It also makes the card/tile drafting meaningful, as turn order certainly influences what’s available at a given time.

The puzzle of where to place a construction card to enable a flexible tableau is unique. And considering there will only ever be twelve cards in your tableau, the shape it may take won’t vary too wildly each game. There’s motivation to keep cards close together to allow overflow scoring between project tiles, but concession options may dictate another path forward.

Additionally, there is just enough variety within the project tiles to allow for mitigation. Demolition tiles can remove a pesky lunar scaffolding space, creating a potential game-changing scoring opportunity. Logistics redistribution tokens allow for project tile swapping. And the selenite robots allow players to ignore the construction card number altogether when adding a card to their tableau.

Another unique wrinkle in the design is the use of the last delivery marker, which is placed where the last player in each round made their card/tile selection. Based on the column where this marker resides, players must discard a card from their hand to take the available options on display. The decision to sacrifice points (cards in hand are worth three points each at end game) to potentially gain important project tiles is another moment of careful consideration.

Once the game wraps up, final scoring commences. Scoring is a bit of a chore here, with multiple types of buildings to consider. The game comes with a scorepad that helps keep everything straight, and once you get comfortable with how buildings score, the accounting becomes easier. There’s certainly enough going on in each tableau that it’s hard to determine who’s in the lead until everything is tabulated. However, a player who was able to get ahead on concessions is certainly at an advantage.

LUNA Capital features a solo mode on the opposite side of the main board. The solo opponent is a mega-corporation called Harrington & Sons. This automaton features few overhead rules but does not include varying degrees of challenge. What it does provide though is a relentless opponent that racks up points and challenges players to be as efficient as possible during a turn.

Devir Games has packed a lot into this small box and doubled down with great production. The theme isn’t the most engaging, and in fact, can be considered rather strange as a narrative device. At no time do I feel like I’m placing a greenhouse tile onto a card to provide benefit to my settlement. As such there’s a major disconnect with engagement as it’s ultimately a point salad experience. Regardless, the puzzle of drafting the right grouping of cards and tiles, then configuring them appropriately in the space allowed, creates flexibility and wonderfully difficult decisions. The combination of concessions, available options, and proper placement all help keep LUNA Capital in quality gameplay orbit.