Home Game Reviews King Me Review
Review of: King Me

We review King Me, a new and unique take on the classic Checkers game from Ravensburger. King Me combines the classic checkers gameplay with some area control and new rules. 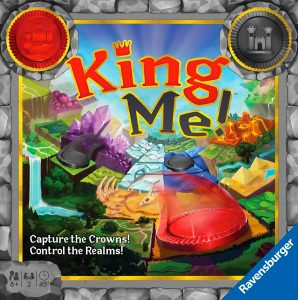 Think back to one of the first games you ever played. Alongside Candy Land and Chutes & Ladders, Checkers had its place amongst those early pastimes. Whether it was playing with your grandpa at the dinner table or seated in front of a crackling, smoky fireplace at Cracker Barrel, chances are that Checkers has some familiarity.

King Me takes the basics of Checkers and adds in area control (gamer definition: scoring points based on who has the majority of an area) to offer a new and engaging way to play an old favorite.

King Me has players jockeying for strategic positions around the board to seize enemy pieces, gain location majority at the right time, or capturing crowns to become kings.

All turns will consist of moving checkers, triggering the event space, shifting cards down, and revealing the next card from the draw deck. The draw deck will act as a kind of timer. Once the final card reaches the event space, points are totaled and a new king is crowned.

Let’s discuss how movement works in the game, as it’s arguably the most important to understand. Basic Checkers pieces may only move one space. They can move diagonally forward or backward, just like Checkers. They can also jump their pieces, as well as the Stone Checkers (non-moving neutral spaces), spread out throughout the board. Chaining together jumps between pieces is the fastest way to move across the board, and still counts as one move. At the start, players will only have these basic pieces to move, selecting two different pieces to maneuver each turn.

If players can manage it, they will be able to capture crowns on the board, which change basic Checkers into Kings. These Kings give players end game points, break ties in locations, and count as 2 Checkers in the locations they “rule”. They also gain extra movement, moving up to 2 spaces.

I appreciated that King Me never really felt like it dragged. Turns moved fairly quickly, if only having occasional pauses to weigh strategic options. I could see a family member playing this with their child who is just learning to play games that require a little more planning and strategy without being overwhelmed or punished by not having that skill honed. With repeated plays and variability with respect to the cards, there’s potential to improve those skills.

That’s not to say this game is primarily for kids. Adults who, being familiar with basic Checkers, would be intrigued to try this new take and can have an enjoyable experience. There might be an occasional mental mixing of those rules and King Me’s by players familiar with both, but I don’t imagine this would happen often.

I did run into an issue with this rulebook. For me, it’s very important that players can learn a game strictly from it. It’s a false expectation that players might watch a how-to-play video or look to outside resources in learning how to play a game. Not everyone will do this and a rulebook should reflect this in how it is written with clear language.

Both I and another player had differing interpretations of movement based on how it was written, specifically with regards to Kings, who are allowed to move two spaces versus one with a basic Checker piece. This was due in part to some conflicting language in the rulebook and player aid. In the interest of moving on, we simply ended up making our own ruling, as we came to different conclusions on what we thought players could do.

Unsatisfied with this unofficial reading and ruling, I reached out to Prospero Hall, who developed this game, to get clarification. The official word is that players are always restricted to a total of 2 space movements on their turn. They can do one of the following on their turn: Move two different Checkers 1 space (whether they are Kings or not) OR move one of their Kings 2 spaces.

King Me is a great game to introduce to kids who are just moving into more complex games, as well as adults who want new challenges with an old favorite. With the variety of strategies and scoring in King Me, perhaps some new memories can be made for some time to come.

Final Score: 4 Stars – A step up from normal checkers with more depth of strategy.

Hits:
• Has the potential for many future games without feeling stagnant.
• Plays in under an hour with fairly quick turns.

Misses:
• Confusing phrasing on movement in documentation (but not for you, now that you know the right way!)
• Might confuse rules with basic Checkers at first.