Hello Kickstarter addicts. This week we are going all in for you with 5 new campaigns to check out. All of them look pretty exciting and there is probably something for everyone. First up is Hitman Holiday, a game we previewed recently. Then, we move on to Seven7s, a quick and fun card game by an experienced designer. Third is Entropy, this one sucked me right in with its striking visuals. Between Two Cities is a game I’ve played personally and can attest to how much fun it is. And finally is Blood Rage, a great looking new minis game from veteran designer Eric Lang. Enjoy!

Hitman Holiday: A Game of Sunshine And Death

Ten assassins gathered in one resort. Only one gets to be called the Number One Killer. Enough said. This is a game of deduction and strategy.

Seven7s allows players to wield the powers of 7 of the most famous 7’s in history in a quick, fun, new card game by Jason Tagmir.

Compete to piece together fragments of your reality in order to save your world and return home. This is a fast-paced game for 2 to 5 players.

You can design unique and beautiful cities in this partnership-driven, 20-minute, competitive tile-drafting game for 2-7 players.

A strategic board game with amazing miniatures, where Viking clans pillage and battle in a quest for glory at the end of the world! 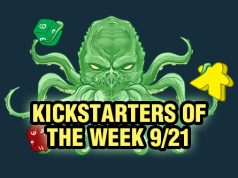 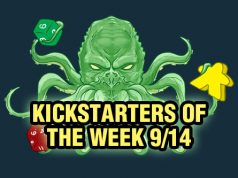 Kickstarters of the Week: 9/7