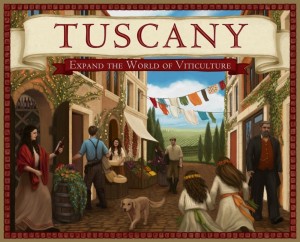 A couple of weeks ago we did a preview for the Tuscany expansion for the worker placement game Viticulture. This “strategic game of wine making” was one of our surprise hits of 2013 and to say that we’ve been eagerly awaiting this expansion would be a bit of an understatement. Viticulture has long since sold out of its original print run, so in addition to being able to get a copy of the new expansion, this will be your first chance to grab a copy of the base game (without paying through the nose in the secondary market).

If you are not familiar with Viticulture (full review here), it’s a light to medium worker placement game that tasks players with running a pre-modern Tuscan vineyard. So how does Tuscany fit into all of this? This new expansion adds almost a dozen new game play elements to expand Viticulture. Less you feel overwhelmed, I should point out that these expansion “modules” are meant to be unlocked “legacy style.” You will be able to slowly add these game play elements to your games of Viticulture over the course of many plays (and hopefully many glasses of wine). 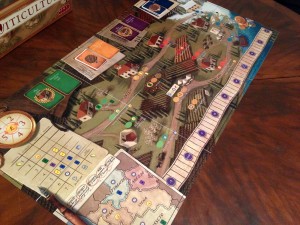 The creators of Euphoria bring you Tuscany, a pack of 10 expansions to Viticulture that unlock (“uncork”) every few games as determined by the previous game’s winner. What story will you tell as you create the most successful vineyard in Tuscany?

Viticulture is a 2-6 player game in which you create a vineyard by planting vines, harvesting grapes, making & selling wine, building structures, and hosting visitors.

Tuscany has already destroyed its funding goal and is on pace to hit every one of its 20 or so stretch goals (according to Kicktraq). If you want to become a backer, pledge levels start at $49 for a copy of Tuscany or $79 for both Viticulture and Tuscany. The game is scheduled to be in backers hands in November of 2014 and you have until Wednesday, Apr 9th to become a backer. So head over today and check it out. Wine not included. 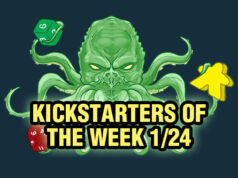 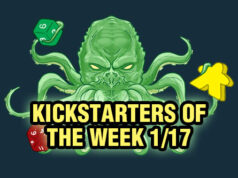 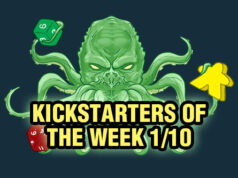