Last year, one of our Kickstarters of the Week was Eight-Minute Empire: Legends. Having backed that project and played the games a number of times, I can tell you that it’s a fantastic game. Red Raven Games is back on Kickstarter now with an expansion to this quick playing, area control game. Eight-Minute Empire: Lost Lands is a new expansion for Legends that adds in more of everything you love about the game, including components for a 5th player! 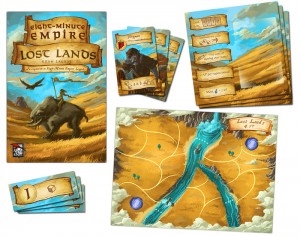 Wanderers from afar bring tales of the strange and powerful in distant lands. Set out to find lost heroes, creatures, and cities as you build your kingdom in this first expansion to Eight-Minute Empire: Legends!

Eight-Minute Empire: Lost Lands adds even more variety and depth to the game, including:

The game play add-ons are fantastic, but to be honest, what I’m really excited about is to get more of the stunning artwork. I really enjoy the style used by Ryan Laukat and I’d even consider buying some original artwork. Gushing aside, Eight-Minute Empire: Lost Lands seems like a great add-on for an already great game. If you’d like to become a backer, a $22 pledge will get you a copy of the expansion and all stretch rewards. There are also other pledge levels if you’d like to add on promo items you may have missed in the past. Eight-Minute Empire: Lost Lands is scheduled to be in backers hands in March of 15 and you have until Mon, Aug 25th to become a backer. So head over today and check it out. 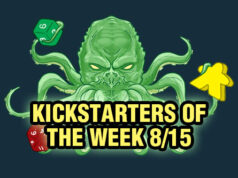 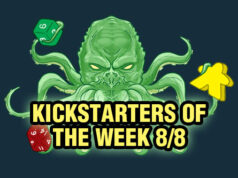 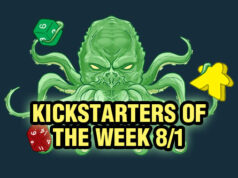