We review Kamikaze Chess, a new variant on chess that changes up the game a great deal. Kamikaze Chess is both a travel version of chess and checkers and also a new way to play this beloved game. 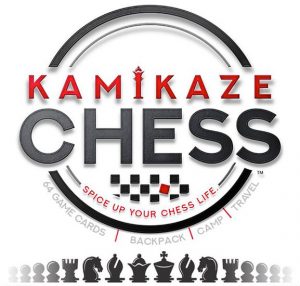 Have you ever wondered what would happen if the stately game of Kings met the random silliness of something like Quelf? Kamikaze Chess turns the timeless game into a trap-laden minefield full of positive and negative consequences. An optimal move could spell disaster, while losing a piece may result in dire consequences for your opponent – every new move is a gamble. This is what happens when you take the strategy out of the queen of abstract strategy. Love chess? You’re probably not going to be down for this.

Kamikaze Chess is a portable chess/checkers set with the option several variants to add some randomness to the classic game. It plays well with the traditional 2 player count.

Kamikaze Chess is both a chess variant as well as a travel size version of checkers and chess. The small deck has cards that represent the black and white pieces and the red cards can be used to play the Kamikaze variant or to simply create a chess board for standard play.

In the Kamikaze variant, the Red Kamikaze cards are laid out to create an 8 by 8 chessboard, with the cards representing the black squares. Then the chessmen cards are shuffled and placed face up on the white spaces of the chessboard. Any pawns that are on the ends are removed. Each player will then choose one of their bishops to move to an adjacent black space, ignoring the Kamikaze card. The player who is in check moves first, otherwise, the youngest player starts.

Pieces move as they do in standard chess. The variant cards are flipped when first encountered by a piece. Each Kamikaze card contains an action that must be performed by the player that landed on it. The actions are:

Once you land on the card and perform its action, the card is void. No action can be used to capture the king. The other rules and the winning condition of Chess are the same as a regular game of Chess.

While I find the idea of a teeny-tiny travel chess set exciting (the box is about half the size of my phone), I’m not sure this card version stands up well. It’s difficult to move pieces. In a travel situation, I’m not sure I’d have the space to lay it out fully. And while it mentions camping and backpacking, both of the kids (regular campers and backpackers) mentioned that finding a flat, dry surface would be a challenge.

The rules are tiny, printed on one of the cards, and VERY hard to read. A small booklet or web link would have been better.

As for the Kamikaze variant – Kamikaze chess isn’t chess at all. There’s little to no strategy here, just a number of pieces that move a certain way, getting randomly shot down or shifted by crazy cards while chasing the king. It’s a reactionary game. And that’s fine… if you’re not trying to play chess.

If you haven’t read many of my other reviews, you need to know that I LOVE abstract strategy. Like, it’s my desert island, last game I’ll ever play, king of the mountain mechanic.

I didn’t enjoy Kamikaze Chess on the first playthrough. Or my second. To be completely honest, I got quite heated about it. I think upon hearing the name and a general explanation of what’s happening, the average chess player is going to find themselves quite frustrated. This isn’t remotely chess or any kind of abstract strategy game.

However, after a few playthroughs with folks that don’t like abstract strategy, I think if you can take the chess entirely out this chess game, you might be able to play it a few times. I’m still not sure I like “random chessmen moving game” but it seemed a lot more accessible to some people. Additionally, this might be a better way to teach new or young players how chessmen move without them being consistently disappointed by losing time and time again.

Kamikaze Chess as a travel version is definitely better in concept than in practice – if you want travel chess, buy a travel board with magnetic or peg pieces. Don’t look for chess or a clever variant here if you’re a chess lover. This might work as a random game for folks that don’t enjoy abstract strategy. However, the rules in Kamikaze Chess are completely unreadable for anyone with vision challenges.

Final Score: 2 Stars – Might be an accessible way to teach new or young players how each individual chessmen moves, but falls down entirely as a game for chess lovers.

Hit:
• Could be used to teach younger plays how each piece moves

Misses:
• Not chess by any stretch of the imagination
• Cards as a board usually result in cards shifting all over the place
• It has an overly large spread for a travel game 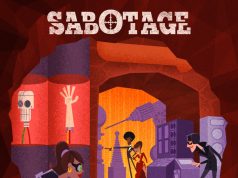