We review Jumanji Fluxx, the latest iteration in the Fluxx franchise. Published by Looney Labs Games, players can no experience the Fluxx gameplay in the Jumanji world. 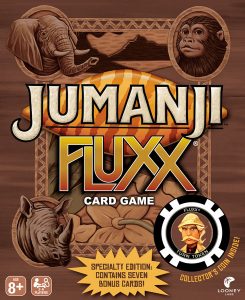 Players start with a hand of three cards. On their turn, each player draws a card then chooses one card to play, following the directions written on that card. Some cards may change the basic rules, affecting everything from hand size, how many cards are drawn or played, and even the win condition of the game goal. There are four types of cards in the game – keepers, rules, goals, and actions.

Keeper cards go in front of the player to fulfill the win condition. In Jumaji Fluxx keepers are based on the characters in the movies (both the 1995 classic and the more recent iterations.) Rule cards are used to change the basic draw one/play one mechanic of the game. Action cards can cause all sorts of shenaniganry, from stealing cards to playing rafts of new ones. Finally, goals set the win condition of the game, but may change from round to round (or even person to person) based on what is played.

The object of the game is to complete the current goal. In Jumanji Fluxx, that’s usually the collection of a couple of related Keepers, like multiple characters from the movies, jungle animal types, or pieces of the map and Jumanji game board.

Fluxx has its trick, and it continues to do it well—make the players master the mechanics. And I’ve mentioned before (in my Anatomy Fluxx review) that I enjoy Fluxx—it’s easy to teach and the variable rules make each game a little different.

I like the mix up of Jumanji lore here. Fans of the original picture book, the Robin Williams film, or the most recent iteration starring Karen Gillian will all find familiar cards in here. The art style is cute—not evocative of any of the three aforementioned in particular but able to make characters from each instantly recognizable.

The goals do a good job of hooking up bits of that lore as well—Mouse and the cake (Cake makes me Explode), Alan Parrish and the jungle (“in the Jungle you must wait…”) The knock out (Danger) cards do the same, using events from the book/movies to set up scenarios to knock players out of play.

Unfortunately, those Danger cards are the crocodiles in this jungle. No one likes to sit out gameplay, and with Fluxx’s ever changing rules you could be sitting for a while. The one round knockout adds a fun little element of take that to the usual game, but the all out elimination later in the game isn’t nearly as funny.

The rulebook has had ages to be perfected and that’s reflected in this product. While I personally prefer a more booklet style set of rules, I can find no fault in the legal sized piece of paper that explains both the rules and every card in great detail. You’d be hard pressed to find a question that isn’t already answered in this rulebook, with clear pictures of the cards to illustrate what they’re referencing

Another fun twist on basic Fluxx, with a theme that will appeal to new and old fans of the franchise. However, the player elimination in Jumanji Fluxx may leave you feeling a little like Alan Parrish, stuck inside the game for years with no respite.

Final Score: 3.5 Stars – Fluxx-y fun and steeped in Jumanji lore, but the ability to knock out opponents may leave players a little bitter at the new king of the jungle.

Hits:
• Easy to teach
• Cute art
• Fun blending of a couple of generations worth of storytelling

Misses:
• Player Elimination is never fun for the eliminated
• Probably not different enough to make a ‘must buy’ unless you’re really into the theme.