We review Jaws: The Board Game, from Ravensburger. The classic 1975 film comes to life as one player is the Shark who is trying to eat his way to victory as 1-3 players are Brody, Hooper and Quint who are trying to save swimmers and stop the killer shark. 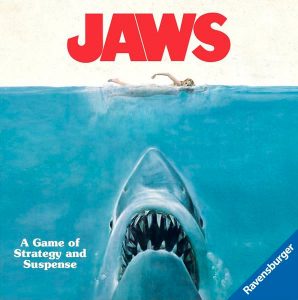 I remember going to the drive-in to see a double feature with my family. The first film was some forgettable family movie but the second was Jaws. My parents had hoped my brother and I would have fallen asleep before it started but we didn’t. We both faked being asleep and then watched almost the whole film. I was mostly watching between my fingers in horror. I think it was almost 15 years later that I was no longer afraid to swim in large bodies of water.

This brings us to today’s review, Jaws, published by Ravensburger. The popular 1975 movie comes to life as 1 player is the shark trying to eat anyone in the water and 1-3 players control Brody, Hooper, and Quint who hunt and try to kill the shark.

The game and board are divided into 2 separate Acts that mirror the ’75 film.

Act 1 is made up of three phases.
1. Event Phase: Draw an event card from the deck.
2. Shark Phase: The shark player secretly determines where they will start on the ocean spaces and uses 3 actions to move 1 space or eat 1 swimmer. The shark will secretly move around the water titles and write their movement on the shark tracker pad. The shark player will then announce after their turn is complete if any swimmers were eaten and where they were eaten.
3. Crew Phase: Brody, Hooper and Quint players each have different roles, and each gets 4 actions. All can move, rescue swimmers, and pick up or drop barrels. Brody has the unique ability to close a beach once per turn.

Act 1 ends when the shark eats 9 swimmers or the crew attaches 2 barrels to the shark. Depending on how many swimmers are eaten will determine how many shark ability cards and crew gear cards each will receive in act 2.

In Act 2: The Orca, the crew will be fighting the shark from their boat. The shark will have 3 potential locations around the Orca where it could surface each round and the crew must try and predict the correct location so they can attack it. The crew will then use their weapons to attack the shark if the chose correctly (via die rolls) and the shark will attack a boat section or crew member (again, using dice).

The shark wins if all the crew is killed or if the Orca is completely destroyed. The crew wins if the shark is killed.

A game’s theme is not a big deal for me. But for those who seek out thematic games, Jaws is highly thematic and should make you happy. It makes you feel like you are playing a version ’75 film in board game form. The game and board are split into 2 acts and the objectives for the shark and crew are pulling straight from the film. It’s not exactly as the film with Quint and Hooper being more involved in Act 1 then the ’75 film but it makes sense from a game perspective instead of two players watching Brody run around. Act 2 is exactly like the movie, but of course, the outcome can vary greatly.

The game mechanics are straightforward and are easy to learn. The hardest thing for most players to remember is that movement, launching barrels, or using firearms is orthogonal only. It can be a little frustrating when the shark or crew is on a diagonal space but that’s not considered an adjacent space. Aside from that the game mechanics are solid and allow you to get Jaws to the table fast.

I have to say that through my many plays I enjoyed Act 1 every time. There’s something about the hidden movement element that gives a nice amount of suspense and tension for all players. As the shark tries to stay hidden, that player will need to keep a poker face when the crew are planning and using their actions. And we usually had a few “no way” moments when the crew couldn’t locate the shark but were convinced that they launched a barrel into the correct space or used the fish finder to find the shark.

Now that said, Act 2 was less enjoyable only because it seemed to almost always devolve into the crew huddling together in the same Orca tile and then bum-rushing the shark. At the start of Act 2, the crew is in a good place but as the turns go by and the ammo cards are discarded, usable Orca tiles become fewer and the wounds pile up, the crew tended to get desperate. They would group together like a homage to Quint’s tale when he and his fellow sailors went into the water after the USS Indianapolis was sunk. The strategy is sound, strength in numbers, but it made Act 2 less fun especially after repeated plays.

The last detail that can be viewed as a negative for Jaws is because it’s highly thematic and mirrors the movie so well, each play can feel like the last one. The first act will have a bit more variety and the outcome of either act will vary, but the game will eventually feel repetitive. If you don’t mind this, then no worries for you. But for those looking for a game that gives you replay variety you’re not going to find it here.

I must admit my best play of Jaws was the first one at Gen Con 2019—even though I was playing the crew and we lost—it was still a blast. This game mirrors the movie fairly close and there are times that you do feel like you’re in the film, like when you play Quint and the shark eats you in Act 2. Jaws has easy to learn rules and is fast to the table. Act 1 hidden movement adds a nice level of suspense and tensions making it fun for all players.

Now what really holds Jaws back from scoring higher is that Act 2 tends to have the crew gang attack the shark making it less fun especially after repeated plays. Also being highly thematic and mirroring the ’75 film makes the replay variety low. There will be some differences that you will find in additional play-throughs, but overall Jaws will feel samey.

Final Score: 3.0 Stars – A fun and highly thematic 1 versus many game that is easy to learn but one that will become repetitive.