We review the digital version of the 2 player trading game Jaipur for iOS. In Jaipur, players are trying to earn the most points by collecting sets and trading them in the market. 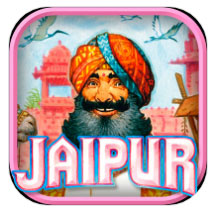 It might be surprising to many readers out there, but this reviewer’s first experience with Carcassonne was the XBOX Live Arcade version in 2007. With any digital translation, it’s much better to have it late, polished, and reach a wider audience than never. Such is the case with the newly released Jaipur iOS app.

Jaipur is a 2 player set collection, hand management card game originally released in 2009. It takes about 10-15 minutes for a single game and 30-40 minutes for a match.

Merchants trading camels, spices, fabrics, and treasures is the subject of Jaipur. Players will aim to trade in sets of cards to gain points, hoping to use their trading ability with the market to force their opponent to take lesser value sets. Most victory points wins, and two out of three games wins a match.

Jaipur is one of the best digital translations this reviewer has seen for a game that is always a recommendation for two players (especially ones unfamiliar to gaming). Readers can stop right here if they’re pressed for time.

Readers who still need more details should first know that like many digital translations of card games, the main consideration is how well laid out the screen is when playing. In this respect, Jaipur is wonderful. Cards in hand are splayed as if they are in a virtual hand, the animation for new cards is quick, and the camels are organized in a stack, slightly offset so the player can count them. When it comes time to access them, they space out further to allow for an easier touch.

Additionally, all the tokens are displayed on the left of the screen, making for an easy quick glance to see how many are left and for which value. A small bag sits next to the players for tokens to accumulate. It also provides a nice graphic to display the player’s score.

Beyond the main display, the game features a campaign mode with an interactive map and other screens for decision making as a player progresses through the campaign. Art is lavish throughout and even though it’s not from Alexander Roche (the original illustrator); Vincent Dutrait’s masterful hand takes over with a huge amount of illustrations. Having seen much at this point, his art might actually be better.

Jaipur by itself is a small game, but Asmodee Digital and Meeple Touch (the developers of the digital version) have gone and above and beyond adding in options that creates something more than just a digital translation. Jaipur iOS is legitimately a great product in its own right.

The main thing to warrant this praise is the campaign mode. It was surprising and refreshing to see such an interactive and challenging campaign for this game. The choices and changing style of play from game to game really helps tell the “story” of the campaign. In addition, players must carefully manage a resource of camels and rupees to gain access to certain locations.

As players explore the map of India and win card battles with merchants, they’re also presented with awards in the form of reward points which… wait for it… allow you to build a palace out of component building pieces. In addition, you can color and add decorations. It is stunning to see such an over-the-top addition to this small game and this is the real reward of a player’s labors.

If, from the above, it appears the game is pure fluff without substance in the gameplay, this is incorrect as well. On hard mode, the AI plays a great game. Not only does it take cards to deny them from the opponent, but it modifies its play to consider the variant rules in place. It also plays to make trades for camels at just the appropriate time, making sure that it’s not giving too many play options to the opposing player.

Last but not least, the play options and tutorial deserves big thumbs up. Besides pass-and-play and, of course, online play, players can also set some options to change things up including modifying tokens to be standard values instead of decremental values. The tutorial is noteworthy for mainly how progressively it introduces players and how easy it is to get into the game. The old spice merchant teacher in the tutorial and from the main menu screen makes appearances throughout the game.

Jaipur’s digital implementation is spectacular. There’s not much else that can be said. Every part of the package comes together to make it much more accessible and enjoyable than the physical game. From here on out, this reviewer will probably never play the original game again.