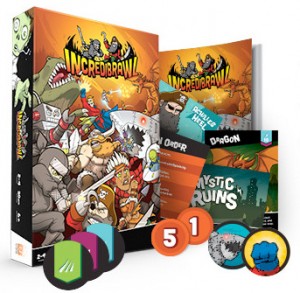 When I was a kid, we used rock, paper, scissors to decide many things. Just to name a few I can remember: which team would bat first, what game we would play, or who had to tell mom we broke something. Despite rock, paper, scissors being a simple mechanic, if used correctly it can be an effective battle mechanic in board games. Take three different attributes or unit types and make them have dominance and weakness to the other two types. The board game version of Civilization (review here) uses this mechanic as well as a card game I recently received a preview copy from. Vision3Games currently has the card game IncrediBrawl open for funding on Kickstarter. In IncrediBrawl, each player has a deck of cards that has a vast array of colorful characters that deal out one of three damage types. Players will play these cards in hopes of winning glory and defeating the other players. However, there is more to the game then just a rock, paper, scissors mechanic.

Each player will start out with matching decks of character cards. Each damage type: Physical, Natural, and Energy has ten characters ranging from 1-10 in their overall power level. These characters are pulled from familiar genres such as: pirates, ninjas, kittens, dragons, sumo wrestlers and everything else in between. In addition to the damage type and power level, each card has an ability that will have varying effects on the outcome of battles. They can gain you glory, make other people lose some, or have some deck manipulation. Players will continue to summon a character and brawl against each other trying to gain 10 glory points.  The game is very easy to learn for gamers and non-gamers and scales well with 2, 3, or 4 players.

Each round of play is considered a brawl regardless on the number of players involved. If you game has more than two players, there will be scrapes that occur to eliminate players from the brawl until only one remains and wins the round. Players start with exactly the same deck of character cards as well as ten cards that have special abilities that have specific instructions on when the cards can be played. They have varying abilities and can cause glory to change hands or change the outcome of a battle.  The game starts with the Grassy Meadow location; these can be switched during the game to gain more points for players that play a specific type of character. Each player starts with five cards in their hand and each round will have 6 phases.

2. Reveal Characters
Each player will select a character to summon to the brawl. Players make this decision based on what they feel will be most effective for that brawl, either the power type and level or the special ability on the card.

3. Trigger Play Abilities
On each of the character cards there will be either a P, L, or W. This represents when these special powers will be activated. P powers are activated when the card is played, L if the card loses, W if the card wins the brawl.

4. Resolve the Brawl
Players will compare the power types of the characters first using the power order of Physical beats Natural, Natural beats Energy and Energy beats Physical. If players happen to use characters with the same power type, the fight will go to the higher power level. The player who wins the brawl then gains one glory point.

6. Draw one card
All players will draw a new card from their deck into their hands.

Rounds this way will continue until one player has accumulated ten glory points and is declared champion. The game doesn’t take a ton of time to play and you can easily get a few games in under an hour.

Per protocol, we don’t discuss components as part of this review due to the game we have will not reflect the final copy of the game. However, the artwork is almost complete and I will say I like the direction. It’s an approachable, cartoony style that the majority of people will enjoy, especially kids.

IncrediBrawl is a game that you have know what you are getting into before you play. The game is a very casual with easy decisions to make during the game. Some gamers who only play games that have the complexity of constructing a skyscraper might not enjoy this game. Even though the game mechanics are simple, there is some light strategy and decisions on which cards to play. What players have to balance is not only the power type and level but the special abilities on the cards.

For me, it’s those special abilities where the game intrigues me. The abilities allow for a lot of interaction with other players. In addition to battling them out right, you can mess with them even if you lose the brawl. There is some inherent randomness in the game, but this is the case for most casual games. For instance, I played a game with my wife where I won a majority of the brawls, but due to the abilities on the cards, she won. Was I mad? No. We had a blast playing and this is what is important.

Another nice feature of the game is the variable game modes that you can play. Players can play without using special abilities or special cards making it accessible to anyone who can grasp the concept of rock, paper, scissors. The modular aspect of this game makes it easy to play for non-gamers as well as kids. My daughter is a little young to play the game but I can see where kids would play this game again and again. This game is enough meat for adults who play this game to not get bored while the kids are having a ball.

I enjoy playing games that are considered filler games. Some gamers shun them, but I embrace them. They allow me to not worry about strategy six moves in the future and just sit down and have some fun. IncrediBrawl is a game that fits into that category for me. The combination of easy and fast game play combined with special abilities that will make each brawl unique make it a game that can be enjoyed by both gamers and their kids. The game is very well designed with multiple game modes and solid artwork. I hope you take the time to visit their Kickstarter page and consider backing the project.

If you are interested in the game, it is currently funding on Kickstarter and scheduled for delivery to backers in February of 2014. A pledge of $30 will get you a copy of the game and all the stretch goals. You have until Saturday, August 10th to become a backer so head over now. 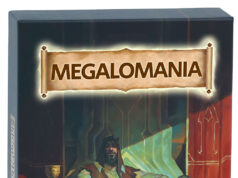