We review GoTown, a quick playing, tower building card game published by Helvetiq. In GoTown, players are trying to be the first to build all floors of their tower. 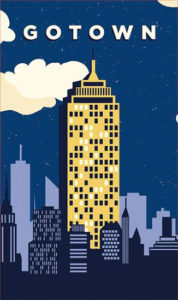 For reasons I cannot readily identify, I have found myself playing tower-building games over the years, from Maxis’s SimTower to mobile-based Tiny Tower and its multiple spin-offs. There is something appealing to me about focusing gameplay on construction of a single building, as opposed to city or country-level simulations.

GoTown, while not as complex as those two examples, hopes to squeeze the tower-building experience into a small package both in footprint and in depth. Today we will examine whether GoTown reaches its goal of towering over its competition.

GoTown is a set-collection card game for 2-4 players that plays in about 20 minutes. GoTown plays equally at all player counts.

The goal in GoTown is for each player to build their own tower and to be the first to have five levels. On a player’s turn, they draw a card and then take any and all of the following actions:

Build a floor: Each floor card has values from 1 through 8 and floors are built by playing cards that sum up to 9. Some of the floor cards are wild, allowing players to choose their value when played.

Steal a floor: A player can play a floor card and steal a solitary floor card from another floor while playing the complementary card to sum up to 9. Jokers can be stolen, provided that they maintain their value. Jokers cannot be used to steal other cards.

Play a special card: Dog cards protect a floor from being stolen, while Bone cards cause Dogs to be discarded. Jackhammer and Wrecking Ball cards can destroy opponents’ floors, Thief cards can steal cards from opponents’ hands, and the Milkshake/Food Truck cards cause players to lose their turn.

At the end of the round, players replenish their hand, and play proceeds until a winner is crowned.

GoTown delivers on its promise of a quick and easy tower-building game. It is quick to learn, play, and takes up little room in a gaming bag. There is a certain cleverness to the easy mechanic of making pairs add up to nine, which somewhat reminded us of the opening lays in cribbage. The deco-style art is fantastic and supports the theme, especially when you first see that complementary value floor cards create a tableau illustration across the whole level.

Unfortunately, for all the benefits that GoTown has as a small-box game, it does not provide that same level of benefit in gameplay. The game swings wildly as it is dependent on the luck of card draws and getting complementary floor cards available for play. In our plays, there were many instances where players found themselves able to do nothing but draw cards on their turn due to there being only four cards of each type in the deck. This effect was somewhat ameliorated in our plays with 4 players, but not enough to be avoided.

While we recognize that long-term planning is not always the point in a quick game, the game continued in its pendulous trends due to the random card draws. In multiple games, a player was able to go from having one level to being able to complete their tower in one shot. While enjoyable when it happened once, we felt that it was a mark against the gameplay when it occurred frequently.

A minor quibble is with the attempt to make the game language-independent by not including rules text on the special cards. One of our pet peeves is having to look up iconography and card powers in a rulebook, and GoTown hits our pressure point in regards to this. A simple pair of reference cards would have gone quite a way in helping to avoid slowing down gameplay by having to have to look up card powers.

GoTown attempts to provide a transportable, quick game to be enjoyed by gamers of all ages. With respect to the first two qualities, it succeeds – its small footprint and short playing time will be apparent to anyone that tries it out. However, the gameplay swings wildly and ends up being not terribly enjoyable when all is said and done.

Final Score: 2 Stars – There are other small and quick games published every day. Perhaps check one of those out.

Misses:
• Gameplay can swing from no actions available to instant-wins
• Does not stand up to repeated plays
• No rules text or rules reference for powers of special cards