We review Gearworks, an area control and set collection board game from Piecekeeper Games. In Gearworks, players are trying to earn points by play their gear cards into the grid, hopefully earning sparks and pieces along the way. 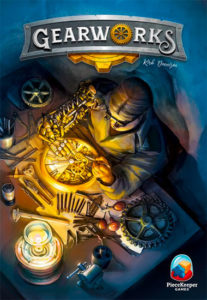 Stumbling through your workshop you come across a few spare parts. You throw a couple of gears in there, presumably weld some things together, and try to invent the next big thing. Other machinists will attempt to get those same spare parts from the machinery, so you have to keep an eye on their moves as they may impact your best-laid plans.

Gearworks is an area control and set collection game for 1-4 players. It plays in about 45 minutes.

In Gearworks, players will contribute cards to the grid which makes up the clockwork machine. Each row and column of the grid corresponds to a particular component. When you place a card, you turn the gears for that row and column to your color. The round ends when all players pass consecutively and the components are given to the players who ended with control of each section.

The catch, of course, is you can’t just place gears anywhere you want. Each row must ascend or descend from left to right. Each column can only have one of each of the gear colors present. As the round moves along, it will become increasingly difficult to place new gears.

When you do place a gear, you may also gain sparks. To gain a spark, two of the other gears that are adjacent to the newly placed gear must either add or subtract and equal the placed card’s value. For example, if you place a 5 card and there is a 9 and 4 adjacent, since their difference matches the card’s value, you’ll gain a spark. Sparks can be spent to draw additional gears, overlay already placed cards, draw new contraption cards, or come back into a round if you’ve previously passed.

Individually, the components are worth two points each at the end of the game. However, you can also use those parts to build a contraption. Each contraption card requires one part from a row and another from a column. If you complete the contraption with one of the required pieces you’ll score four points. If you manage to have both components those will score nine points. However, you can only use parts that you acquire that round, they won’t carry over.

After the third round the game ends and player’s total the points from their parts, completed contraptions, and unused sparks. The player with the mosts points is the winner.

Gearworks has a lots of simple mechanisms that, not unlike a complex machine, is more than the sum of it’s parts. Managing your hand of gears, where and, just as importantly, when to place them is key to becoming a successful machinist in this game.

Gaining sparks allows you to get additional cards and contraptions, but also place over already placed cards. Often you will play any card you can as long as it meets the requirements for placement. All parts will score points, so even though you may prefer certain parts for contraptions it’s almost always right to place cards anywhere you can, especially if you can gain a spark in the process.

As the grid fills up, you’ll try your best to lock in the rows and columns that correspond to your contraptions in hand. Having the last placement can be very valuable in this way, but wait to long and you can get locked out of where you are trying to place. You can pass, rather than place a gear, but you have to spend a spark to get back into the round. And if all the players behind you pass, the round will end and you won’t get a chance to reenter. Waiting can be quite a dangerous game.

The bonuses from sparks are all very useful, but I do wish there was some ability that would at least temporarily stop people from placing in a spot of your choosing. Your best chance to lock in a column, for instance, is obviously filling it up entirely. But other players can still spend sparks to play on top of an already placed card and potentially ruin your foolproof plans.

There are optional player powers that can be used to give a little bit of asymmetry to the game. The powers aren’t groundbreaking, but are at least different enough to make you feel like there is some specialization you can do. If you don’t use your power in a round you’ll gain an extra spark. Player’s also receive additional sparks between rounds if they have less parts than the leaders, allowing them a small boost in an effort to catch them up.

Mechanically Gearworks is a really solid title. There is a bit of hand management, some area control, and the spark system gives you something additional to think about when deciding where to play. The set collection aspect doesn’t come through quite as strong as you really just want as many parts as you can handle, getting the ones that correspond to your contraptions is more of a bonus than a requirement. And even if you try to focus on those specifically you’ll likely give up lots of points elsewhere by focusing narrowly on those parts.

If you have a love for steampunk machines, Gearworks is very likely to peak your interest. While the game isn’t necessarily driven by theme, the art brings to life a believable steampunk vibe. Even if there is a bit of math involved in what is otherwise an area control element, it’s pretty simple math and adds a unique layer that gives you something to really dig into.

Again, I wish the focusing on your contraptions in Gearworks was easier or worth more points. It’s too hard to keep control of a specific part without giving up everything else. And the score difference just doesn’t make it worth it. However there is enough depth and fun in Gearworks to satisfy many different groups of gamers.

Final Score: 3.5 Stars – Solid area control aspects with a unique system to give you game-breaking powers.

Hits:
• Grid layout and restrictions make for some tough decisions.
• Spark system adds another thing to think about when playing cards.
• Art really adds to the feel of otherwise themeless gameplay.

Misses:
• Set collection is difficult, making quantity of parts an easier path to victory.
• Going last in a round is powerful and can be incredibly swingy.