We review Four Gardens, a set collection board game that will have players building out panoramas in their garden. Published by Korea Board Games, Four Gardens has some amazing components and really good gameplay. 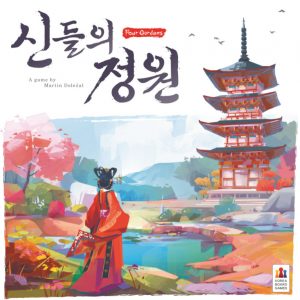 While game components don’t always make or break a game for me, they can defiantly get me interested. That’s how I came across Four Gardens from Korea Board Games. I saw the cool pagoda towering above the table (see what I did there?) and my interest was immediately piqued. Add on to that a good theme and well-made artwork and I was ready to take this one for a spin (that’s a pun too, you’ll find out why in a minute).

Four Gardens is played over a number of turns in which players will be trying to construct panoramas in their garden. The goal, of course, is to earn the most victory points by the end of the game.

Each player will have a hand of five cards, and on their turn they must choose three of them to play. Each card can be used in a number of different ways:

If, at any point during your turn, a groundwork card has all the resources it requires, it’s flipped over and becomes a completed landscape card. You then move your score marker on the matching color track up one space for the card you just competed and every previously competed card of the same panorama. If you reach the end of a score track and score additional points, then instead of moving your pawn, you move your opponents back one space. If you build all of the cards in a panorama, you also earn one of three bonus tiles.

The game ends after a player has built a specific number of landscape cards (based on player count).

I was pretty impressed with my plays of Four Gardens as it was simultaneously an easy to learn, almost gateway level game, and also really thinky. The multi-use cards give players a lot of options for things to do on their turn. Collect resources, lay groundwork, move things around… you’ll be using your three actions each turn to the fullest. I also appreciated how since you are playing a card for each action, that helps remind new players how many actions they have taken. It’s a really good system all around.

Speaking of, I was a huge fan of how the scoring system works. Each time you move up a scoring track, you will be earning more points. Get to the end and you start moving your opponents back. If you are able to knock them off a track, then they can’t score for that track at all this game. I’ve never seen a scoring system quite like this in a game and it felt very unique.

The pagoda itself, while it does look really cool, is mostly a gimmick. The same effect could have been achieved with a series of flat discs fastened in the center. But I can appreciate how cool it looks and it does work really well. It rotates smoothly and players never had any issues knowing what resources to take. The only gripe I heard from players is that it can sometimes be a pain to look around it to see what resources you can rotate to—but that was a really minor complaint.

And that part of the game can also really get the brain-burning. Since you have limited your space on your planning board, you have to be conscious of what card you play to rotate. You want to make sure you get all the resources you need, since the direction and quality of each resource are determined by the card and tower. While getting 3 rocks might seem great, if none of your groundwork cards actually needs rocks, you’ve just wasted 75% of the space on your planning board. Despite the light nature of Four Gardens, there are actually a lot of hard decisions to be made.

This is further illustrated when deciding which panorama cards to go for. Do you go for the quick, 2 card ones that will earn you a bonus tile? Or maybe you want to go for the larger panoramas that will take many more turns to complete, but are way more lucrative when it comes to the score track.

Finally, as much as I really enjoy Four Gardens, my biggest complaint about the game is that it probably plays best with 2 players. We played a four-player game and the downtime was a bit too much. Also, since the game state changes so much between turns, you really can’t do much in the way of planning ahead. You have to react to where the tower is when it’s time to move it. So for this one, I’d probably stick with 2, or maybe 3 players a most.

I was pleasantly surprised with Four Gardens. It was a simple, yet thinky game with a great table presence. Sure the pagoda is a gimmick, but it works well in that role and is fun to play with. And multi-use cards are a favorite game mechanic of mine and it works very well for this game. Finally, I loved the scoring mechanics in the game and can’t recall seeing it implemented elsewhere. Overall, Four Gardens was a solid win for me that can be played with just about anyone. However the game can get a bit long with four players, so maybe stick to just two with this one if you care about downtime.

Hits:
• Excellent production values
• Highly accessible game that could be played with just about anyone
• Unique scoring mechanics
• Interesting decisions to make

Misses:
• Downtime gets to be a bit much at 4 players