We review Fog of Love, the two player only game that puts the players into the adventures of a couple in a romantic comedy. While an unusual theme for a board game, Fog of Love delivers on more than expected. 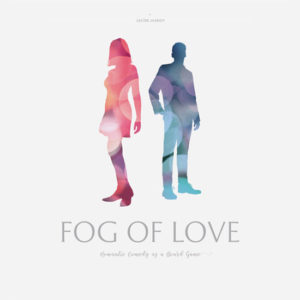 Usually the first few paragraphs of a game review offer a smattering of small talk to introduce a game. It’s just enough to frame the context of the review and then tie the end conclusion back to the introduction. However, this review is going to get very heavy, very quickly.

If gamers are not familiar with the concept of emotional intelligence, they should be. As many scientists and psychologists have studied the human psyche, a variety of other forms of mental capacity have surfaced. The ability to convey meaning and feeling through art or music is one example. Just as concrete is the capacity to connect with our own emotions, recognize them in others, and take steps to manipulate emotional states. This is the broad framework of emotional intelligence.

When gamers approach a new game, sometimes they recognize mechanisms that require an intelligence or excellence they do not possess. Spatial puzzles are different than mathematical puzzles. The market is changing in this regard. Party games, often pushed to the side as whimsical deviations, often require different kinds of social intelligence to succeed.

And so, as gamers take a look at the game in this review, what will be described in mechanical terms and what will be dissected is not the entire picture. The capabilities of players to understand the drivers of emotion, roleplay those emotions, and then impart emotional needs through communication is the quintessential skill required for this next game.

Fog of Love is a roleplaying, social deduction cooperative game for two players. It takes about 90 minutes to play.

The two players in Fog of Love are in a relationship. The game story plays out a romantic comedy through which those characters develop and collide, with the hope that they meet their destiny at the end. However, that’s not really the point.

The setup requires that each player construct a character from a variety of Trait, Feature, and Occupation choices. These form the foundation of the roleplaying for each player-character. There are no hard and fast rules to the roleplaying, but without this, much of the other parts of the game will operate mechanically.

Once players have their characters set, they scenario selected tells players how to proceed. The beginning scenario is a tutorial which guides the players through the various cards and how the game works. Essentially, players will take turns back and forth playing Scene cards. On these cards are choices to be made separately and then revealed. The effect of the choice is listed on the card.

Once a certain set of scenes are complete, players move on to the next chapter with each increasing the conflict. The Finale card usually offers an interesting choice at the end.

With each scene, players are trying to reach individual or shared goals, however, each player’s goals are hidden and only through non-specific character dialogue can players communicate. Players also have end game Destiny cards which determine the conditions under which a character meets their destiny (in the terms of the story). Players can “win” if they both meet their destiny. On the face of it, this is the success of the cooperative nature of the game. However, the point of the game is the journey and the mutual telling of the story, so success is really a variable here.

Much of the interaction of the players centers around the communication in a scene, with dramatic, funny, and even shocking revelations to be had about each character, all dependent on what scene a player chooses. The resulting character attributes are tracked on a large display of personality meters. As an example, on the Sensitivity meter, a negative value indicates someone who is thick-skinned and calm while a positive value illustrates anxiousness and sentimentalism.

Some of the Destiny cards require a value from these attributes (as do the character’s goals), but they also depend on a character’s overall Satisfaction score in the relationship. This is a number set during the beginning of the story and then, depending on the scenes played, can increase or decrease during the game. Players should keep an eye on this score as well as their partner’s if they are trying hard to meet their Destiny.

But again… that’s not really the point.

There’s a lot to unpack in this game. That sentence is meant to be taken figuratively. It’s a challenging game and there is a lot to absorb even after one play. To hopefully give readers a real sense of what to expect, there are some obvious things to celebrate first.

The components are fabulous. There are nice quality poker chips for making choices. The board art is minimalist, functional, and clear. The cards are appropriately sized and of good stock. There are even card holders for a character’s traits. And rounding out the praise is commendation for the really nice quality box insert which holds everything perfectly.

Second, the tutorial is wonderful. It carefully guides new players through the choices in the game. It’s the absolute most appropriate way to gently draw in suspicious gamers who may not be comfortable just diving in to the experience.

And like any good romantic comedy, this review has a turn. Most gamers, who play this game straight and just aim for completing character destinies, will not like this game.

As a seasoned Dungeons & Dragons Dungeon Master, it was often left to this reviewer to explain goals to new players in a fantasy roleplaying game. Besides the next dungeon to delve or the next wererats to conquer, a roleplaying game is about the journey. Just inhabiting the character and engaging in conflict is enough. Gamers who get this point will get Fog of Love.

The scenes to play are memorable and a romantically involved couple who plays (a not uncommon game expectation) will discover interesting aspects to their partner. The narrative that is formed can often be unexpected, even when played a second time due to the new characters that are created with each play.

Players who will enjoy Fog of Love are the kind who watch a romantic comedy and wish they could take on the role of one of the characters. It’s the same kind of person who can seek to deeply understand the motivations of their significant other and upon seeing those, cries for joy because they finally see the real person. It’s hard to promise these moments will emerge from every play, but this is the journey that Fog of Love aims to deliver.

Readers who have skipped everything else and have arrived at these final thoughts seeking a score won’t be disappointed. Fog of Love is an excellent game, but that’s not the whole story. It’s not a game that any player would want. Those who would take the time to understand the full personality and motivations of a game will find a wonderful gem. Players who simply wish to cut to the chase and find out how to win will not be rewarded.

Before readers take Fog of Love off the store shelf or click “order” on their web store of choice, they should take a moment to understand everything that this game seeks from a player. A commitment like this could lead to supreme satisfaction. But it also has the potential of leaving a player dejected and unfulfilled.

Final Score: 4.5 Stars – An emotional journey in the lives of others offers questions, soul searching, and deeper connection, even with some big demands of players.

Misses:
• Only works for those with the right emotional mindset