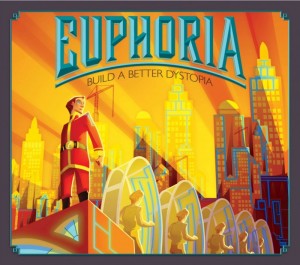 This week’s Kickstarter of the Week comes from a company looking to get their second game published. Euphoria is the newest offering from Stonemaier Games, the publisher of the fantastic game Viticulture. We recently did an interview with Jamey Stegmaier from Stonemaier Games where he talked about Viticulture, running a kickstarter and Euphoria. A great read if you have the time.

Stonemaiers’ newest offering is a worker placement game set in a dystopian future. As a big fan of dystopian and post-apocalyptic fiction, I was immediately intrigued. One of the fun things about Euphoria is that Stonemaier Games ran a contest on their website (which has now since finished) where people could vote on the reason for the apocalypse that sets the theme for the game. The winning choice was “internet disconnected”, a choice I voted for and thought was pretty clever.

The game itself has some interesting mechanics. From the Kickstarter page:

In Euphoria, you lead a team of workers (dice) and recruits (cards) to claim ownership of the dystopian world. You will generate commodities, dig tunnels to infiltrate the opposition, construct markets, collect artifacts, strengthen allegiances, and fulfill secret agendas.

Here are some of the unique elements of Euphoria:

The campaign has been chugging along nicely, having long since met its funding goals. In fact, it’s already at 1000% of its original goal. One thing I really liked about the campaign is that they are not messing with early bird discounts. Everyone gets a discount off MSRP no matter when you become a backer. I wish more publishers took this approach. If you want a copy of the game, it will cost you $49 pledge (Euphoria has a $70 MSRP). The campaign has also already hit 10 stretch goals already and appears to be on pace to blast by many more. If you want to back the game, you have until June 12 when the campaign ends. Check out their campaign now to be a backer. 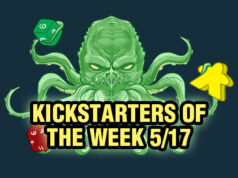