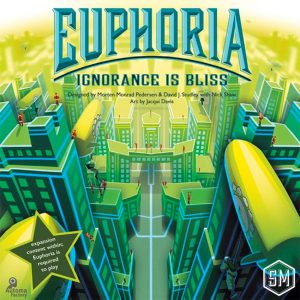 Back in 2013, a small game publisher launched their second Kickstarter for a game called Euphoria. This worker/die placement game tasked players with taking control of the dystopian world. My original review of Euphoria gave it a solid 4 stars (way back in 2014) and it still makes its way to our table every now and then (it’s one of my wife’s favorite worker placement games).

Ignorance is Bliss adds a few new things to Euphoria. The main feature are the 54 new recruit cards and 16 market tiles. These are to be used together and not mixed with the original components. While the markets in the expansion are pretty straight forward, the recruits add in a fifth type, a factionless one. These recruits always come into play face up, but aren’t aligned with any faction, so they don’t gain the benefits from the allegiance track. This is to offset by their more powerful ability.

In addition to the new recruits and market tiles, the expansion come with an Antique Bazaar board, which creates a “Track” of 4 artifacts to be used with the expansion cards and tiles (again, not with the core recruits and markets). This lets players pick a faceup antique card instead of drawing from the deck. The one at the end is always free, with the others costing a commodity.

Also include are a set of players mats and Large commodity tokens (5x value). These are simply a quality of life upgrade to make things easier on the players.

The tunnels in Euphoria have also been revised. The expansion come with stickers to place on your game board that changes the start space of the tunnel miner. Now, with less players, the miner starts closer to the end.

Finally, the long sought after Automa mode has been added to Euphoria. Players can now play solo vs the Automa deck or use it in a 2-player game for a more interactive experience.

My golden rule for an expansion is that I want more variety and fun in my base game without tons of rules overhead. I don’t want to learn a whole new game when I’m adding an expansion. And with that focus, Ignorance is Bliss definitely succeeds. While it isn’t a modular expansion per se, it has a few different feature parts.

It feels like Ignorance is Bliss is equal parts quality of life upgrades, part rules fixes, and part variety. And you know what, all of it works great and goes to make Euphoria a better game.

For the quality of life upgrades, you have the large commodity tokens new player mats. The commodity tokens replace the multiplier board (that we rarely used anyway) with some nice big tokens. But the player mats are the best upgrade here. It houses all of a player’s tokens and moves their morale and knowledge tracks from the game board to their player mat. This makes tracking those two values MUCH easier, especially with a big group.

Ignorance is Bliss also includes so much needed rule fixes. The first is the tunnels. With lower player counts, the miners rarely made it to the end of the tunnel, not only making those sweet faction locations always locked off but cause the skybound Icarite faction to be much more attractive. Now, the miner starts a space closer for each player missing from 5, causing the tunnels to become fully dug even with less players.

A few other minor rule changes are that during setup, the players whose faction isn’t in the majority now start with two bonus commodities. Not a huge with, but a nice balancing change. Also, using multiple dice on a turn now costs a Morale for each die after the first. This not only makes rolling doubles less powerful but makes Morale a more useful stat other than just for hand size.

For some added variety, the factionless recruits are definitely the star of the show. While the new markets and normal recruits add a bit of variety, they are mostly more of what you would expect. Factionless recruits throw a nice wrinkle into the game because while their ability is usually pretty powerful (and unique), they lose the benefit of any of the allegiance tracks, which is a solid trade off. I’ve found that these recruits really shape your strategy more so than the standard ones.

Finally, Automa mode makes its appearance in Euphoria. Personally, I’m not much of a solo gamer, but I know there is a demand for it. So, it’s nice to see it now available for Euphoria. Using it in solo mode is fine, but the real benefit for me is using it in a two player game. While it does add in a bit more “maintenance” during the game, I’ve found 2-players in Euphoria to be a bit subpar compared to the higher player counts. Automa mode helps solve that issue for the game by adding in the robot players.

Euphoria: Ignorance is Bliss is an expansion I didn’t even know I wanted. To be honest, I never expected to see more content released for a game that’s already half a decade old (a lifetime in board game years it feels like). Yet it succeeds on all fronts. It’s incredibly easy to integrate with the base game (more good stuff), fixes some minor issues with the original, and adds in some nice bling. All in all, that’s a win for me.

Euphoria: Ignorance is Bliss also doesn’t really introduce anything groundbreaking, so if you weren’t a fan of the base game, chances are, nothing here will change your mind. If you enjoy games of Euphoria, than Ignorance is Bliss definitely is worth the add, as it fixes some minor quibbles and adds in a lot of nice upgrades.

Misses:
• Wish it would have been here years ago