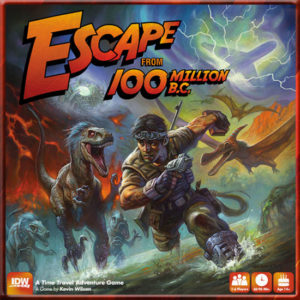 Whatever big budget movie next summer has in store, the concept usually begins with a pitch meeting where the producer needs to be convinced that the idea is viable. In this game review, that pitch goes something like this:

“Ok, what if there was a team of time travelers sent back to the distant past and their time machine breaks into pieces as they arrive? Then they have to race to find all the pieces, avoiding dinosaurs, and helping other random time travelers get back to their own times.”

Unfortunately, as a movie, this might not get the greenlight (maybe if Dwayne Johnson was attached it might hit some decent numbers), but as a game idea, it’s good enough for IDW. The publisher has tapped the talents of veteran game designer Kevin Wilson to deliver such a project. The result?

Escape from 100 Million B.C. is a cooperative thematic adventure game for 1-4 players. It plays best with 3 players and for that player count it takes about 90 minutes.

Given the pitch above, players could suspect that gameplay involves each person taking the role of a character of the time traveling crew. Each has their own stats and abilities, with some being more usable at certain moments more than others.

The game board represents an unexplored hex map with the players adding tiles while trying to find equipment and pieces of the broken time machine. There are other inadvertent time travelers as well. Helping these notable folks return to their own time will help avoid the penalties of paradox.

Each player gets a turn to take actions. This is almost always moving around the map and stopping when an encounter occurs. When a new hex map tile is drawn, it will usually provide an encounter with dinosaurs, equipment, or time machine parts.

When players encounter dinosaurs, they are given three choices: run, fight, or scare them away. Running demands a roll with your speed attribute. Fighting is the same with your brawn attribute. In both cases, having the right equipment can help. Scaring a dinosaur requires an equipment card that has the word “Repel” on it. This is the best choice when possible because it keeps the players from increasing their amount of Paradox in the game.

As players collect time machine parts, they must make their way back to the center of the board to reconstruct it. Depending on the difficulty level, this could be between 6 and 9 parts spread across the board.

The Paradox Track is a measure of how much the players are affecting the past. Killing dinosaurs moves the players’ marker up the track, as in the Butterfly Effect. At the end of the game, other things can move the marker up, like leaving equipment behind or leaving the ad hoc time travelers without returning them to their own time.

If the players manage to return all the time machine parts to the center of the board and collect some equipment, the final paradox score is calculated by adding up values from remaining time travelers or equipment. If the score is below 33, the players win. However, the players will also consult a chart at the back of the rules to determine what kind of future it is. For example, a small score of 11 means “Brontosaurus has been renamed Apatosaurus.” However, there are some far more serious results.

To start off, Escape from 100 Million B.C. gets a lot right and it’s a fun game, but it’s got some significant issues that will keep players away from frequent repeat plays. These problems don’t negate the fun, but really distract from it.

The overall game structure is extremely well done. The mood of exploration of the map is one of tension and a feeling of danger, hoping to avoid dinosaurs as much as possible. And even the dinosaurs, in some cases, have a lot of character, especially the more dangerous ones. The flip side to this comes at the end of the game when many of the dinosaurs might have been removed from the map. In this case, the empty map feels like a burden to move through, eating up turns without many events.

The kinds of events and people to encounter are also really interesting. There are movie and historical references galore offering lots of moments for comedic commentary at the table. But this also requires a certain type of play group. More serious gamers who snub dice rolling will not appreciate the action contained here. Staring down a Tyrannosaur and rolling hordes of dice to determine whether or not the creature goes down takes a certain personality.

The most serious problem the game has is that once the story has been told once, there’s not an extreme desire to revisit it quickly. Even if the stories were fun, it feels like a joke told too many times. The spirit and energy become mechanical. Separated by distance and with the right mindset, the game retains its original entertainment value, especially when new players are added to the mix.

Escape from 100 Million B.C. is a lot of fun. It’s just not very repeatable. This is the kind of game that sits on the shelf for just the right moment. The stories herein are challenging and interesting, but it can feel like the repeat of a B movie unless time (sorry) separates one play from the next.

Final Score: 3.5 Stars – Escape from 100 Million B.C. won’t be played often, but when it is, there’s a lot of dinosaur fightin’, time traveler escortin’, crazy fun to be had. 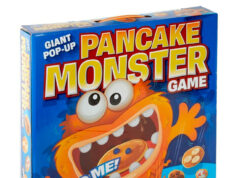