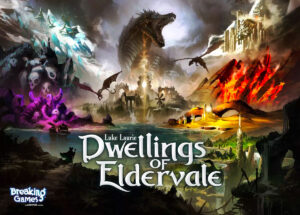 So, you’ve finally saved enough resources to consider becoming a homeowner, but there are many factors to consider before choosing the perfect dwelling. For starters, you’ll probably want to position your house somewhere near a whole bunch of mythical runes. You also must consider how closely you lay down roots near your neighbors. The more people who live around you, the more rewarding you’re living experience will be. Oh, and then there are the giant elemental monsters rampaging through the realm you’ve chosen to live in. Did your real estate agent not mention that? That might sound a little dangerous, but it’s just one of the things you must deal with if you plan on raising your family in Eldervale. The things we do for a shorter commute.

That’s the gist of Dwellings of Eldervale, the giant game of giant monsters from designer Luke Laurie and publisher Breaking Games. And I don’t want to spoil the rest of this review, but it needs to be said right up front that putting roofs on meeple’s heads thereby turning them into tiny houses is the single greatest thing I’ve ever done in my life.

Dwellings of Eldervale is a hybrid game but its main mechanism is placing workers onto a hexagonal grid that players will expand over time. These hexes give resources in the form of tokens that can either be cashed in or attached to cards in players’ personal tableau for multiple uses. Purchasing new cards allows players to grow their tableau and also advances them up multiple elemental tracks that will increase the value of each card at the end of the game. These tableau cards are activated when players regroup their workers from the grid of hexes that comprise Eldervale.

Players can also take actions on specific hexes such as adding a hex to the mainboard or drawing magic cards that will either boost end-game scoring or provide one-time powers. Adding hexes not only grows Eldervale, but also gives players more areas to construct their dwellings, which is the main way to score points during the game. Some of these hexes will also add a new monster to the board.

Building a dwelling is standard euro game stuff—hand in a few resources for construction—but the way you do it is by physically fitting a roof onto a meeple’s head. (This activity, in case you haven’t heard, is the greatest thing I’ve ever done.) While building dwellings will grant you a lot of points, it does cut into your worker pool, which is why a key element of the gameplay involves recruiting new workers of varying powers. Dragons, for instance, can travel further and are better fighters than the standard “builder” workers, while the wizards of each faction aren’t great fighters but can teleport to any open hex on the board.

Obviously, in a game with detailed monster miniatures, there’s also going to be some monster-fighting action. Combat is handled with a dice-rolling system that I personally found pretty elegant. You match the highest die value of each participant and continue through all the dice until someone wins. Losing in combat isn’t the end of the world since you get a resource as a consolation prize, but it does block the defeated workers from taking actions during the next regroup.

The game will end when someone has built all six of their dwellings or when there are no more hexes to add to Eldervale. Scoring involves the elemental tracks, accounting for all the related tableau cards, and some magic card rewards.

The first thing that springs to mind when you see Dwellings of Eldervale set up on the table is that it looks like teaching and playing it is going to be a headache. Regardless of which version you have, there’s a lot of components involved, but the game underneath the sprawling and intimidating table presence isn’t all that complicated. The actions players can take are straightforward and while there are numerous choices, none of them are difficult to understand. Once you set up your tableau, your options expand, but the difficulty doesn’t.

Mechanically, the game isn’t exceptionally innovative. Place a worker, get the benefit. Doing certain things moves you up tracks. Buying and upgrading costs resources. Sometimes you roll dice to fight. All these things exist in other games, but the combination here works remarkably well.

Often games that use some of these mechanisms can feel like a chore or, even worse, the engine you build is so flawless that at some point you’re not even playing the game anymore; you’re just hitting a button and compiling a bunch of stuff (Imperial Settlers, for example, can feel this way at times). Laurie’s design somehow keeps everything fun, even the mundane aspects like summoning a new type of worker. When my wife summoned her warrior during one game, she declared that the very act of expanding her team was a lot of fun and was “just like Dungeons & Dragons!” (She has never played Dungeons & Dragons. I’m unclear what basis she used to form this opinion.)

The gameplay is streamlined and accessible, but one can’t really discuss Dwellings of Eldervale without talking about the production of the game itself. The components are outstanding, from the trays that act as both organizers and storage, to the miniatures, and even to the tile and meeple quality. The standard edition’s cardboard resources are also above average by industry standards. And then there are those attachable roofs (insert audible sigh).

It’s easy to get absorbed by the tidal wave of positive reviews for a game and Dwellings of Eldervale has had more than its fair share of positivity. As a rule, I usually approach the new hotness with a mix of skepticism and inherent pessimism, and it was no different when I first sat down to play this one. The truth is, however, that Dwellings is exceptional. (That’s right: I’m on a first-name basis with the game.) The choices are varied and interesting without being confusing and the threat of a monster attack keeps certain areas on high alert for portions of the game.

Sometimes it’s wise to avoid combat, while occasionally it’s necessary to dive headfirst into an impossible battle because it’s the most expedient way to get that extra sword you obtain after defeat. And then at some point, after fully understanding the available options and what path would be most advantageous, the game is simply a lot of fun to play. And fun matters.

Misses:
• End-game scoring can take a decent amount of time