We review Duel of Wands, a two player dueling game published by Renegade Games. In Duel of Wands, players are casting spells trying to banish their opponent's psyche. 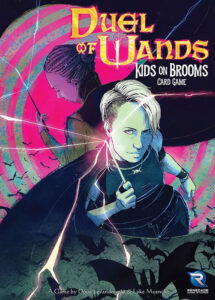 Dueling games are nothing new to tabletop gaming. The most famous, Magic: The Gathering, is decades old and still enjoys a passionate community of players. Yet not every game needs to be a CCG behemoth. Today we are going to be looking at a quick-playing, two-player dueling game from publisher Renegade Games.

Set in the Kids on Brooms universe, Duel of Wands has two players attempting to banish their opponent’s psyche. Quick playing with a small footprint, does Duel of Wands deserve a spot in your collection? Let’s find out!

The basic version of Duel of Wands has players using almost identical decks to duel. Each player has 11 cards that are the same and two unique cards. Each turn a player must either cast a spell (play a card) or discard a spell. The ultimate goal is to banish your opponent’s psyche. Spells do a variety of things such as banish your opponent’s cards, recover your own, or peak at your opponent’s hand. With only 13 total cards in your deck and 2 cards that let you get them back in your hand, rounds go by pretty quickly.

One of the unique things about Duel of Wands is that players always need to have to have 4 cards in their hand. So if you lose a card due to an opponent’s action, you immediately draw up. This helps keep the action in the game quick and interesting.

If you successfully banish your opponent’s psyche, or if they ever can’t draw up to 4 cards, you win the round. Between rounds, the unique cards are shuffled and players get two new ones for their deck. Win 2 out of 3 and you win the game.

Once you’ve played a game or two of Duel of Wands, you can use the full rules. Which allows you to upgrade some of your identical cards ot more advanced versions. This happens at the start of the game for both players and also between rounds for the loser.

In a few ways, Duel of Wands reminds me of the microgame Love Letter. Yet instead of using a shared deck, it has two similar ones. The other reason is because this is mostly because the game is all about reading your opponent. In many dueling games, its about deck construction or building up an army to attack with. But with Duel of Wands, you need to figure the best time to attack their psyche card to win.

Perhaps they draw it with their opening hand and you can banish it right away. But it’s a risk, do it with your own psyche card and you lose if you fail. Plus, if you do fail at attacking their psyche card, they get a free refresh action, which can big. There are only two refresh cards in your deck and they are bound to be attacked by your opponent. Limiting their access to those can be really powerful because if you run out of cards to draw, you lose the round.

After playing the base game, I was unsure about Duel of Wands. It was fine, but forgettable. However, once I graduated to the full rules, I enjoyed the game a lot more. The battle of wits with nearly identical decks got old pretty quick, but once you add in the sub-game of the upgrading cards, it adds another level of depth to the game. Now, you need to try and think about which cards your opponent has upgraded and how that will affect their strategy.

Maybe they chose to upgrade their Dispel cards to get better at attacking you. Or perhaps they focused on the Expose cards to improve the information they were able to glean from your hand. Overall which cards to upgrade (and the fact that your opponent doesn’t know until it’s too late) helps round out the game into something much more interesting.

My only real concern about Duel of Wands is that the game can get a little samey after a while. The cards aren’t that diverse and you are kind of doing the same thing over and over each round. And sometimes rounds can go on a bit too long with two skilled players. While the upgraded cards and unique ones do breathe a little more life into this one, this is definitely the type of game you’ll probably pull off the shelf once in a while. It’s a filler game, which is fine considering its price point and footprint.

Finally, for those who are fans of the Kids with Wands RPG game, this title can integrate with that. There is a section in the rulebook about using it during your RPG sessions. While I’ve never tried that RPG, I thought that was a nice touch.

Duel of Wands is a solid little dueling game that should appeal to gamers whole like a little head game in their duels. This one is not just about throwing attacks at your opponent, but knowing which cards to play and when. Figuring out your opponent’s strategy, and getting information about what might be in their hand is the key to victory here. And since the deck are so similar, as their cast and spent piles get larger and larger, you can start to calculate what cards they might be holding in their hand. Duel of Wands is fun in short spurts and will appeal to fans of the genre looking for a quick dueling game.

Final Score: 3 stars – A easy to play dueling game that will appeal to fans of the genre and those that like reading their opponents.

Hits:
• Small footprint and easy to get to the table
• Upgrading cards give it a little extra bit of life
• Can be integrated with the RPG