We review Dungeon Doodle, a flip and write board game published by Pegasus Spiel. In Dungeon Doodle, players are using polyomino shapes to create a dungeon for heroes to explore. 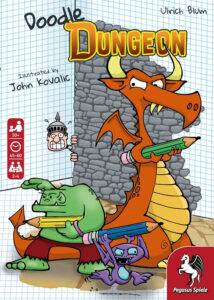 Friends of yours truly are pretty familiar with the flip-n-write game Cartographers. It’s an amazing blend of polyomino placement and competition to reach shared goals while fending off monster attacks from adjacent players. Players who have already feasted on this gem will be interested to hear of the game to be dissected in this review.

Pegasus Spiele has brought Ulrich Blum’s take on the flip-n-write game to market while also adding the cartoon artistry of famed Munchkin illustrator John Kovalic. Combined with a dungeon creation theme, it sounds like a perfect match. Whether it can keep up with other games in the category is the real question.

Doodle Dungeon is a game about drawing a dungeon on a grid from a randomized set of cards featuring monsters, traps, treasures, and walls. Two to four players will take roughly 45 minutes to an hour to play. For this reviewer, only having two players or teams works best, but the gameplay is the same with all player counts.

There are three phases that players will proceed through during the game: dungeon build, hero path, and dungeon defending. The game is structured this way because during the first phase, each player will use the randomized cards to draw dungeon elements on their grid. Next, an opposing player will try to direct the assumed attacking hero’s path through the dungeon to kill monsters, avoid traps, and find treasure. Finally, the last phase has the dungeon creator playing out the hero’s attack by making die rolls for monster fights and tracking the damage the hero has taken as well as the monsters and treasure found.

During the first phase, each player takes a dungeon sheet (large paper sheets featuring a grid and checkboxes) and a pencil. Erasers and a pencil sharpener are included as well as templates to help players draw the monsters as if they were John Kovalic. Gameplay is simple during the fourteen turns of this phase as each player will draft a card from a pool of cards flipped over from the deck. After each turn, the first player marker (the pencil sharpener) passes left and another player gets to choose first from the flipped cards.

The cards feature two main things: an object/action and building icons. The object represents a bonus that can be used during the Dungeon Defense phase while the building icons are elements that must be added to the player’s dungeon. If they take the card, they immediately add the icons into their grid drawing walls, monsters, traps, or placing a secret treasure.

The dungeon building rules are pretty easy to keep track of. Since the hero path will eventually move from a start space to an end space, players need to provide at least one continuous path through their dungeon. For example, they aren’t allowed to put walls blocking the entrance. Also, players will want to resist the temptation to create only one path. Treasures that provide points to the player are placed secretly at monster locations. Players can’t place a (secret) treasure unless a (visible) monster guards it, and, at the end of the game, the remaining treasures can be worth big points. So, players will want monsters to fight the hero, but also to avoid the hero so as to earn a higher score.

For the hero path phase, players hand their sheet to a neighbor and allow them to draw a single path through the dungeon. There are some rules like avoiding loops, but mostly, this is a chance for an opponent to find the dungeon’s treasures and kill as many monsters as possible without dying, thereby reducing the player’s points.

Finally, the Dungeon Defense phase has players following the hero path drawn and rolling 2 ten-sided attack dice when monsters are faced. The odds of defeating monsters are biased towards their defeat, but players can boost a monster’s strength for an attack or play potion cards to give heroes in opponent dungeons some healing. Additionally, if the hero path crosses a trap, it’s automatic damage. And, if the player manages to kill any monsters who are secretly guarding treasure, those points are lost as well. Players total up these scores and subtract the remaining health of the hero to get their final score.

The first major element to distinguish this effort from the crowd of other games with writing is the involvement of an opponent in how well a player scores. This is a fantastic addition, but given some of the complexity of drawing the most efficient hero path and having the hero come out alive, it feels better when there are only two players. This needs a little bit of explanation.

With only two players, there’s less likely to be any unfairness in where players sit at the table. If someone happens to sit to the left of a very inexperienced player, they have a definite advantage over someone else who’s played several times. The inexperienced player might not draw the best hero path.

If four players are present, it could also play perfectly as a team game with the highest total team score winning. This isn’t so much a criticism of the game design as it is an observation of the best way to play with new players.

The other glaring twist to the typical formula is that after making a dungeon, players get to make choices as a wandering hero moves through the dungeon through card play. There are interesting decisions to be made here and some of the cards collected during the first phase will matter a lot. This creates a tense mix of options but can also more often be a simple math calculation. Doodle Dungeon is targeted at families and more casual gamers so it’s not surprising reduced complexity was a design goal. However, this reviewer would love to see an expansion with more complex play adding heavier choices in the cards.

Finally, it may sound like a criticism, but it also feels like the game’s goals are very static. Doodle Dungeon is enjoyable and invites minds prepared to out-think opponents, but players are doing pretty much the same things from play to play. This reduces the game’s replay value somewhat and offers a chance for an expansion to improve it even more.

Doodle Dungeon is an solid flip/roll-n-write game. Even with a lighter complexity, it still manages to capture the imagination while dungeons are being built and the take-that fun as players move through the dungeon. Some gamers might look at this as the Munchkin version of roll-n-write, but that could not be further from the truth. There are a lot of strategies to feel out here which deserve quite a bit of explanation during the teach. However, it all results in lots of fun stabby-stabby moments and that’s perfect for gamers who need to thrash their opponents, even if only on paper.

Misses:
• Player counts over 2 with new players creates an issue
• Replay value can be lacking
• Teaching is not so easy