We review Cartographers: A Roll Player Tale, published by Thunderworks Games. In Cartographers, players are exploring and mapping out the northern lands trying to score the most points. 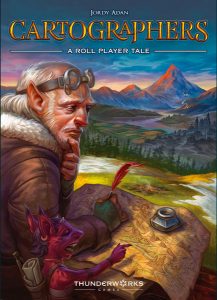 Thunderworks Games is probably best known for its excellent dice game Roll Player. It’s a game where players are building out an RPG character over the course of the game. So what was next on the docket in the Roll Player universe? That would be Cartographers: A Roll Player Tale. This is a game in the roll and write genre (technically a flip and write because it uses cards instead of dice) that will have players mapping out the territory of the northern lands. The roll and write genre has become about as crowded as it can get, but there is always room for one more… right? Let’s find out.

Games of Cartographers are played out over 4 seasons, with each season activating two of the four scoring goals. The scoring goals rotate in a staggered pattern (Goals A and B in season one, Goals B and C in season two, etc…).

Each season is divided up into multiple turns, each of which has 3 phases:

Explore Phase: Reveal the top card of the explore deck. This card will show one or more terrain types and shapes.

Draw Phase: During the draw phase, players choose one of the terrain types/shapes on the explored card and must then draw it on their map. Players can flip and rotate shapes as needed. If a player manages to orthogonally surround a mountain, they also get to fill in a coin on their coin track (they found a mine!).

If an ambush card is revealed, all sheets are passed to a neighbor who draws a monster shape on their opponent’s sheet. Players will need to try and surrounded these ambush spaces with terrain or lose points at the end of the season.

Check Phase: Each Explore card has a number in the corner. When the numbers on all the explored cards add up to the season’s time threshold, the season ends.

During the end of the season, players earn points for the two active goal cards. They also earn one point per coin marked off on their coin track. Finally, they lose 1 point for each empty space next to a monster area.

The explore deck is then reshuffled for next season, with another ambush card being added. The game ends after the fourth season and the player with the most points is the winner.

I’ve lost track of how many games in the roll and write genre I’ve played over the past two years. It’s a lot though. While I am definitely a fan of these types of games, I feel like sometimes publishers are just rehashing ideas that have already been done. That being said, there are still surprising and clever ideas to be found and Cartographers does a good job of beating its own path. In fact, this title has become one of my new favorites in the genre.

The theme is a little pasted on (what roll and write theme isn’t), overall it works really well. Even though my map making skills aren’t the best, I enjoyed creating my map and even found myself telling little stories along the way. “Oh, there is a village here right by the mountain for easy access for the workers.” That being said, players are still going to primarily be going after those goal cards.

With 16 different scoring cards (four of each type), there is going to be a lot of variety in your games. I am not a math person, but the permutations of the possible combinations of scoring cards are pretty high. Add on to this the fact that the maps are dual-sided (with a giant canyon in the center on the B side) and you can expect a lot of replay value from Cartographers.

And thanks to the way scoring works, Cartographers actually has some solid decision making required. The first goal card will be scored in Spring, but not again until Winter. While every goal card is scored twice, when they score is going to be important. Do you focus on the most upcoming goal card or do you go heavy on a Fall card to have time to build up a high-value score? Steady drip or feast and famine are both viable strategies. Even some cards give you a choice of terrain type or shape. Do you want a small shape, but earn a free coin? Or a big shape to finish off that monster ambush?

One of the most divisive mechanics within our plays has to be with the ambush cards. These monsters can wreck other people’s plans depending on how mean your group is. As it’s the only player interaction in the game, I kind of like it. Perhaps I just have a mean streak, but I enjoyed finding ways to put those monsters in the worst spaces possible.

The hardest issue we’ve had with Cartographers is probably trying to decipher our maps at the end. Things can get messy, especially if you aren’t great at drawing symbols (someone’s trees looked an awful lot like their houses). We had the best luck by ditching the included pencils and using colored markers. Blue for water or red for villages made things worlds easier to decipher.

Finally, Cartographers also comes with a mini-expansion (well two technically as it comes with a promo card for Roll Player). These give players a power they can use once per season (players share 3 different power choices out of the 8 included) at the cost of coins they’ve marked off. This mini-expansion works well in the game, and since using the powers are optional and each player has access to all three, I saw no reason not to use the expansion during our games.

Cartographers: A Roll Player Tale was an excellent addition to a genre I didn’t think had much room left. But hey, I love being surprised. I’ve already played this one a bunch of times and it’s easily near the top of my list of favorite roll and write games. Cartographers scales perfectly (since turns are simultaneous) and despite the easy to learn ruleset, it has enough meat to keep players entertained throughout the game.

The monsters in Cartographers might not be for everyone (although I liked them), however, I wouldn’t mind seeing some more variety with them (only 4 are included). Overall, most of my complaints with Cartographers were nitpicks of an otherwise fantastic game.

Final Score: 4.5 Stars – A great entry into the genre that is fun to play and even offers a bit of player interaction.

Hits:
• Nice variety in the scoring cards
• Plenty of decisions to be made
• Mini expansion works well
• Scales perfectly

Misses:
• Colored markers make things worlds easier
• Ambush cards can be hit or miss depending on your group