We review Cassiopeia, a scifi card game published by HobbyWorld Games. In Cassiopeia, players are racing to be the first to terraform all of their planets using some action selection and resource management mechanics. 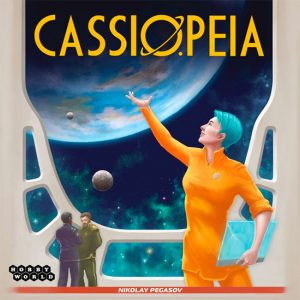 The spread of humanity to the stars has been a consistent through-line for as long as I have been consuming science fiction. From the robot-centric visions of Asmiov, to the utopian ideals of Roddenberry, and the gritty future envisioned by Corey, expanding the horizons of mankind to the cosmos is often the basis of an engaging tale. It is of no surprise that some of the highest-regarded titles in recent years have integrated this sort of theme. Cassiopeia, the newest offering from HobbyWorld Games, puts players in command of a mission to a new star system. Does Cassiopeia succeed in its mission of exploration and terraforming? Read on to find out.

Cassiopeia is an action selection and resource management game for 2-5 players. Cassiopeia plays best with 3-4 players.

The game round begins by all players selecting a Specialist from the tableau by placing their marker on it. The Specialists’ tableau is (mostly) randomly generated at the beginning of each game, with each Specialist having its own unique actions. This also sets the initiative order, with players then taking their actions in order from left to right based on which Specialist they selected.

During each player’s action phase, they first take any coins from the Specialist they selected. Players have the option of either purchasing a resource using coins or taking the Specialist action they chose. Terraforming a planet can potentially happen next, with players paying the cost (in resources) to terraform and flipping the planet card over to unlock bonuses for the player. Since the cost of terraforming a planet is determined by the planet on its left, as more planets become flipped, the cost increases. At the end of the round, any Specialist card that was chosen gets flipped over to their second side, revealing a different action that can be selected in the following rounds. Any Specialist not selected gains a coin, as an incentive to select that unused action in later rounds

A key mechanic is logistics, which is based on two factors – the state of a player’s terraformed planets and the status of the supply base card, which has one side for Earth and one side for Mars. Each side of a planet card has symbols for either Earth or Mars, and if the Supply Base matches the majority of a player’s planet cards, that player gets various bonuses on actions. Since the planets and the Supply Base card are continually flipping, players must keep track of their majority and logistics in order to optimize their actions.

Whichever player is the first to terraform their tableau of seven planets is declared the winner!

The replay value of Cassiopeia is obvious right from launch, with the selection of the Specialist cards for the game and the creation of both the Specialist and planet tableaus. The number and type of Specialists change from game to game, giving every game its own unique challenge and flavor. The order of the tableaus also is random, and since initiative order and planet terraforming cost are dependent on these layouts, it gives just another twist to the setup that provides excellent replay value options.

The core mechanics of Cassiopeia are sound and will be familiar to most gamers, allowing them to pick up the rules rather quickly. To us, Cassiopeia played like an open-handed version of Citadels, with a little more complexity due to the varying resources and more flexible player order. We enjoy a mechanic that gives incentive for players to pick actions that have accruing bonuses over time, so we thought that the inclusion of building up coins on unselected Specialists was a smart one, especially if that action may not readily be as useful to players.

The dual-sided Specialist cards provided an interesting twist on standard action-selection, with each side providing a different action, and therefore different options to players throughout the game. Players not only have to account for the actions they and their opponents are playing, but also what actions they are potentially opening up for the following turn. It adds quite a bit of strategy to selecting an action, but we would recommend some sort of player aid to reference both sides of the Specialist cards quickly and without disrupting the game state.

While the logistics rules are interesting, we found them to be a bit frustrating at times. Since there was only one card in the setup that can flip the Supply Base, we found that many times that a player’s plan for optimizing their logistics would fall flat, and if they were actually able to achieve it, it was at the sacrifice of other actions. In addition, we found it to be a bit fiddly to keep having to recheck and keep track of the various bonuses granted by optimizing logistics. A neat mechanic, to be sure, but one that became very tedious in implementation.

There is a catchup mechanism in the game known as Fund, which is based on the number of terraformed planets a player has. Each terraformed planet reduces a player’s Fund, allowing players who are behind in the game opportunities to catch up through various Specialist powers. While ostensibly a good idea for keeping games close, we found this to be just another tedious mechanic added, especially when playing with higher player counts.

With a game like this, our group really hoped to see the theme shine through. Unfortunately, Cassiopeia left us wanting, with the theme completely pasted on and not expressed in a unique or interesting way through gameplay. This could have quite literally taken place in any other setting – fantasy, pirates, contemporary, and the like.

Cassiopeia is a fine game, with some neat twists on familiar mechanics that make the game interesting and replayable. With that comes a title that involves a bit of repetitive and tedious gameplay with a pasted on theme. The positives outweigh the negatives, though, so if the theme and mechanics appeal to you, you should take a try on this one.

Final Score: 3 Stars – A mixed bag of resources and theme that could hit the spot for the right group of gamers.

Misses:
• Mechanics are fiddly and tedious
• Pasted on theme
• Turns can get repetitive depending on game setup