We review the Cartographers: Heroes expansion from Thunderworks Games. This expansion to the Flip and Write game Cartographers adds in new cards, new sheets, and other components to add variety to the game. 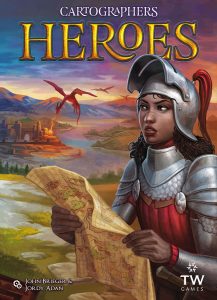 Readers who don’t know what Cartographers is should help themselves by taking a short trip to the Board Game Quest review found here. Tony Mastrangeli found it to be one of the best roll/flip and write games there is and this reviewer wholeheartedly agrees. Cartographers garnered a Spiel des Jahres nomination with a distinct feeling of adding satisfaction of personalization and emotion to a game. Simply put, it engages players beyond what a score says at the end of play.

Now, Thunderworks Games is asking if players want more. The upcoming Cartographers Heroes will be launching on Kickstarter and the publisher has graciously afforded us a look at an advance copy. This new game can be played on its own as a standalone expansion, or mixed (certain components) with the original Cartographers. This review will look at the new components and help readers decide whether owning both is unnecessary, a nice-to-have, or a need-to-have.

In like manner, players must also decide before the game whether to use the original Cartographers map sheets or if they want to use the new Heroes map sheets which offer slightly more complexity. Along with these sheets, additional maps are available from a variety of new “Map Packs” (available on the Kickstarter). Each set of new map sheets presents a specific challenge from an overriding terrain feature. For example, in the Nebblis – Plane of Flame map, a large volcano takes up a large area and the effects of lava are in play.

The main featured addition from the Heroes product namesake are Hero cards which are added to the Explore deck the same way Ambush cards are added (one each season). These cards allow players to draw a single 1×1 square and target certain spaces as monster-killing spaces. If a monster is ever drawn in these spaces or if a monster is already there, the monster is destroyed and the space becomes a “destroyed” space with the negative effects of that monster space nullified. Destroyed spaces are considered filled and as such still help some other goals such as filling in a full row or column.

Besides these items, the Kickstarter will also offer colored pencils, some of the Skills cards that were small promotional expansions, and a playmat. For readers who aren’t familiar with the Skill cards, they allow players to use special abilities once per season. For example, this could be drawing the shape split into two parts instead of the normal shape. The catch is that these abilities may also require players to spend gold coins they have.

Everything else about the play experience of Heroes is the same as the original Cartographers.

Bigger. More options. More elaborate options. That is the best way to describe the full experience of Cartographers Heroes. For those who may only consider purchasing the base offering of Heroes, this provides a new double-sided map sheet and the aforementioned Explore cards, Ambush cards, and Scoring cards. In addition, you’ll receive the new “Skills 2” expansion cards. So, just looking at the most basic pledge for Heroes, players get a considerable amount for their dollar.

What may not be so quickly apparent from the Kickstarter page is that the new cards for Explore, Ambush, and Scoring are a step-up in challenge. Players who are experienced with Cartographers will acutely appreciate the added complexity. The shapes have grown beyond mere “Tetris” polyominoes. In addition, the Scoring cards have also stepped up in requirements. The combinations of the new scoring patterns and the new shapes offered create decisions that are more brain burny with more elaborate choices, even early in the game.

If there is a nit to pick in all of this it’s the main feature of the new box. The Hero cards are an interesting feature, but the way they are implemented feels awkward at times. Since the hero shapes could be drawn before the monsters show up, often a player drawing a monster can ignore the hero squares entirely. This makes drawing heroes AFTER a monster is drawn much more satisfying. Granted, this is a very small complaint and something which is easily fixed by seeding the Explore deck with heroes later in the game rather than earlier. All in all, Hero cards are appreciated because they do offer players who hate dealing with monsters a new method to dispatch their abilities.

Players might also like to know how well the Map Packs work. The included Plane of Flame in the review copy sent is indeed worthy of experienced Cartographers players. Since the volcano expands as lava cards are drawn, creating terrain features next to it is dangerous. There’s a little bit of push-your-luck here hoping the lava doesn’t expand and disrupt the perfect shapes players could already have.

Cartographers Heroes is worthy of purchase. It has just the right content for a stepped-up version of an already awesome game. When combined with the first title, there are oodles of options to keep players in map-making joy (and delicious decisions) for untold numbers of game sessions. For this reviewer, the flaws are minute and fixable with one house rule (a personal choice). If players are new to Cartographers, they’re likely to find the first game a better experience but it’s easy to see that even after 4 or 5 games, the options presented in Cartographers Heroes would be a welcomed addition.

Misses:
• Heroes show up before monsters at times